In the energetic whirlpool that we’ve come to call Restaurant Row—Urban Spoon lists 84 eating establishments around this stretch of Sand Lake Road—the idea of a relaxed and upscale supper club might seem a little incongruous. But that’s exactly what Ocean Prime calls itself.

Among the ResRow offerings is a small gaggle of eateries in the Rialto shopping center, snuggled on a wedge of land along Spring Lake, and you could make a day of it eating noodles and sushi at Bento Café and sipping urban cocktails at Bar Louie. J. Alexander’s, the other main sit-down purveyor, recently closed, leaving Ocean Prime as the prime choice at Rialto.

The seafood and steak restaurant is a part of the Cameron Mitchell group, which owns nine restaurants in Ohio and several locations of its “modern supper club” across the country (Mitchell’s Fish Market was a part of the group prior to its sale to Ruth’s Chris). A chain, yes, but one that looks to attract a refined audience. Waiters at Ocean Prime wear white dinner jackets, live jazz plays in the piano bar, wine is decanted and adult beverages are made from scratch. The three-page drinks list features some interesting cocktail choices and a varied selection of wines by the glass. The segmented dining room has an artistically lit bar called the Blu Lounge (joining deep blu and blu on the avenue in a trendy spelling quirk), a private dining room and an outdoor patio that sort of looks out over the lake if you sit in the right section and stretch your neck (although not for long; a seven-story residential and retail building is under construction between the lake and restaurant that will take the view completely away). 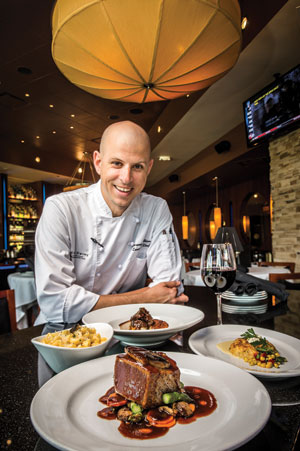 Part of the “prime’’ in Ocean Prime refers to beef—select filet mignon, New York strip and ribeye broiled at 1,200 degrees. But the talented executive chef, Jeremy Mattson, was in residence at the Mitchell’s Fish Market location in Winter Park when I wrote about it in 2012. The man knows his fish, so that’s what I concentrated on here. Mattson pays attention to the Seafood Watch recommendations put out by the Monterey Bay Aquarium and is sensitive to the environmental impact of what he serves.

He cares about the visual impact as well. A presentation of yellowfin tuna ($39) arrives as a 3-inch cube, seared on the outside, ruby jewel-like color within. The dish is almost too large to comprehend as fish, certainly too large to eat at one sitting, particularly as it was topped with a wedge of foie gras. The very rich mushroom ragout ladled around the outside both complements the liver and contrasts with the brightness of the fish, tasting like a surf and turf without any actual turf. Good the next day, too, I can assure you.

The real “Surf ‘n’ Turf” on the menu ($16) is an appetizer of sea scallops with slow braised short ribs almost covering the sweet (and perfectly cooked) shellfish like a sauce. It’s an interesting concept that could put some people off, but worth a try. Easier to recognize is a tower of raw ahi tuna supported by a disc of avocado, with a crunchy layer of what I took to be those fried potato sticks (you know the ones) in between, but what was actually shredded wonton skins ($16). The signature starter, the lump crab cake (also $16), is barely a cake at all, more a generous portion of crabmeat pieces, a sweet corn purée dressing adding a very fresh accent.

At the risk of repeating myself, I ordered sea scallops as a main course ($33), as much for chef Mattson’s expertise with scallops as for the promise of Parmesan risotto with English peas, and I was not disappointed with either. The black truffle macaroni and cheese side ($13) takes its flavors very seriously, and if you like a healthy dose of truffles you will love this.

Service is superb and just attentive enough; the sourdough bread that accompanies the meal is worthy of San Francisco; the cocktail mixers are fresh and house made. I didn’t quite feel like donning a dinner jacket myself, but Ocean Prime felt close enough to being a supper club even without the formal attire. 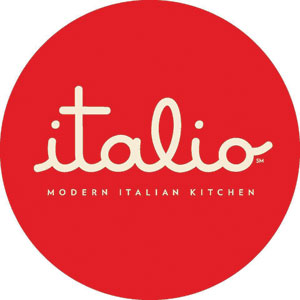 There are many world cuisines that continue to surprise us. Quick, name a Tibetan dish, or a staple of the Estonian diet. But you might think there’s nothing left to discover about Italian food—and you’d be wrong. I didn’t know about tiella, a double crust pizza, until a few years ago, and just recently discovered ’nduja, a spreadable pork sausage.

So it’s likely that piadina, the specialty of Italio Modern Italian Kitchen, is just popping onto your culinary radar. A specialty of Romagna in the north, this thin flatbread is the street crepe of Italy, quick-cooked and served with cheese and meat as a sandwich or with sweets as a dessert. At Italio, the concept has been stretched into a catch-all; whatever they serve—grilled chicken, sirloin, sausage or vegetables—can come wrapped in a piadina, including pasta. That’s right, a spaghetti sandwich.

But good spaghetti, at the proper toothiness. Italio is, much like Greens  & Grille and Pine 22, a place where the quantity, combination and design of your meal is up to you. Pick pasta, salad bowl or that intriguing flatbread, add protein, select a sauce (the pesto is particularly good, and I’m a pesto snob) and two dozen toppings and cheeses, and enjoy your creation. Everything is cooked as needed, the tomato sauces are fresh and bright tasting, prices are reasonable ($6.78 to $8.98) and the portions are enormous if you choose them to be. The recently opened Winter Park location is Italio’s second in Florida, with more on the way.

This article appears in the June 2013 issue of Orlando Magazine.
Categories: Reviews