Pig Heaven at The Polite Pig

The Petrakis powerhouse trots out exemplary fare at The Polite Pig, sticking with local providers while continuing to reinvent their porcine empire.

There are many ways of considering the behemoth that is Disney Springs: upscale shopping mall, entertainment arcade, culinary theme park. All of which can be loved or hated, depending on your tastes.

The shopping has expanded exponentially since Downtown Disney transformed into the Springs, adding dozens of high-end outlets for clothing, gifts and accessories. Entertainment, with the demise of DisneyQuest and an uncertain future for Cirque du Soleil, is in flux.

But food, spearheaded by an aggressive outreach to celebrity chefs, has blossomed into a major reason for heading down I-4. And a seeming contradiction—a locally sourced, artisanal restaurant disguised as a fast food outlet—is The Polite Pig. The restaurant is owned by area culinary legends James, Julie and Brian Petrakis, Disney Springs’ only local chef presence and a delectable example of what commitment and passion can accomplish. 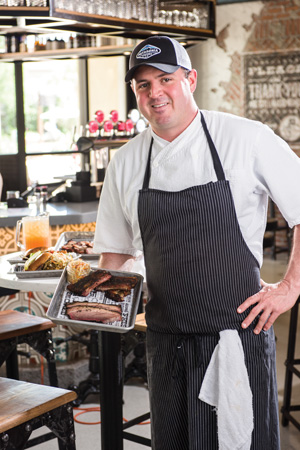 Here, one can find a place to snack on spicy pork cracklings and a house-brewed beer, or savor maple-mustard glazed, smoked wild salmon while sipping a tap-drawn gin and tonic. Fans of giant food, reminiscing about turkey legs of yore, can order a fresh baked pretzel so large it needs its own cradle, or go completely vegetarian with orders of barbecue cauliflower and whiskey-caramel laced Brussels sprouts that totally satisfy.

There’s no logic to a shopping arcade restaurant going to the trouble of slow-smoking citrus-rubbed chicken, serving coffee-scented, amazingly tender brisket, or offering a bourbon list with more than 50 selections and ales made in their own brewery. And that is exactly the point of The Polite Pig.

I sat down with James Petrakis in front of a mountain of food and talked about the seemingly sudden changes in his porcine empire. The landmark Ravenous Pig, the area’s first gastropub, opened in 2007, bringing whole animal cooking, craft charcuterie and inventive Southern cooking to Winter Park. In 2012, the craft brew-centric Cask & Larder opened, and things seemed to coast. Then suddenly, last year, C&L moved to Orlando International Airport, Ravenous took over its location, and the Disney-initiated deal to open The Polite Pig was announced.

What, I asked, happened?

“It’s growth,” the 39-year-old Petrakis says. “It was time. My dad [John, who owns several Central Florida McDonald’s] has always opened and opened and opened more restaurants. He always said, ‘Keep pushing when you have the chance.’ ”

Disney approached Petrakis because of the success of Cask & Larder. “Also, I wanted to go into business with my brother Brian—most of the concept at Polite Pig is his.”

They got “The Call” in December of 2015, and began construction the following August. It was a risk—Disney supplied the imprimatur of their name and the physical plot; James, Julie and Brian paid for everything else, from construction to machinery.

Creating a food business with the entertainment giant is akin to a ballet atop a tightrope, and when the corporation “suggested” that Polite Pig buy from approved suppliers, the Petrakis clan—particularly Julie—firmly declined.

“We said that we built our reputation on local providers,” James says, “and that’s what we plan on doing. Julie put her foot down.” He laughed. “They eventually agreed.” It was such a daring stand to take that other Disney Springs chefs bring it up in conversation (Rick Bayless of nearby Frontera Cocina said to me, “We’re not sourcing locally yet, but if those Polite Pig guys can do it …”).

“This idea can go places,” Petrakis says. “We can’t dumb it down. Disney wants us to do what we want to do.”

And so do we, if it includes items like their rich, smoky wild salmon ($18 plate; $15 sandwich), sumptuous chicken salad made with meat from the smoker ($17 salad; $11 sandwich) and St. Louis ribs ($19) accompanied by a thick, rich sauce and an aura of wood smoke like a benevolent spirit.

James and Brian are in the Polite Pig kitchen every day, while Julie commands The Ravenous Pig/Cask & Larder Brewery location in Winter Park. “This is the most satisfied I’ve been in the past two years,” says James. “I think about this kitchen all the time—I couldn’t sleep for the past few nights because I was reworking the mac and cheese.”

And like his go-getter father, James has a plan. The continued success of Polite Pig and the Orlando Airport Cask & Larder (which is run by a management company) will help finance a revival of his iconic eatery.

“To be honest,” James says, “Ravenous Pig strayed away from our original idea of focused, well thought-out food. That is changing. Right now.”

He looks forward to the next chapter. “People are going to be really excited about what Ravenous will become,” he says. “We want it to be what it was at the beginning—everybody’s place.”

James and Julie Petrakis bring fine-dining backgrounds to the fast casual scene. Uniquely, the pair was named as semifinalists for the James Beard Foundation “Best Chef: South” award four times, the only couple to share a nomination. James has been nominated twice as Food & Wine Magazine’s “People’s Best New Chef” and chosen six times as a semifinalist by Best Chefs America.