For over 53 years, Beefy King has remained an Orlando staple. 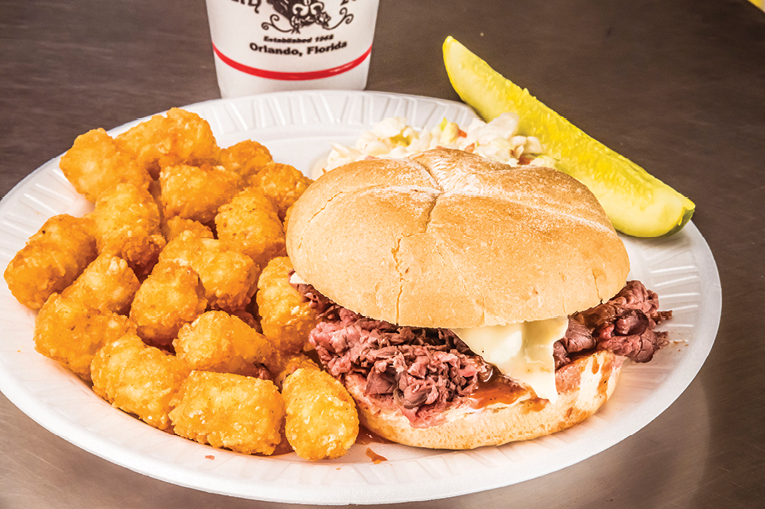 Late night’s Jimmy Fallon famously popped by Beefy King in 2013 to pick up lunch during an Orlando visit, and the Twitterverse exploded like pyro over EPCOT. University of Central Florida alumnus and comedian Daniel Tosh gave a Beefy King shout-out during the 11th season debut of his Comedy Central show “Tosh.0” to roars of local approval. And when NBA’s Shaquille O’Neal was an Orlando Magic power forward, he’d cruise by the drive-through to order his favorite jumbo hot dogs with the works.

An Orlando sandwich institution for 53 years this month, Beefy King enjoys the celebrity, but doesn’t rely on it. The jumbo dogs have come and gone, but the flagship Roast Beef sandwich au jus on a steamed bun with a side of Beefy Spuds continues to drive the engine of the beefy little restaurant that could.

A family-run operation since it launched in 1968, Beefy King’s formula for a tasty meal is simple, yet so novel, that visitors often take photos and video of the sandwich-making process, says semi-retired co-owner Roland Smith, who still jumps in to help whenever needed.
“We cook the top-round real roast beef fresh every morning in its natural juices, then put the roast on the slicer, adding the au jus as it’s being sliced,” Smith says. The bun is steamed, the white Swiss-American cheese blend melted, and the sandwich wrapped and served. Beefy King’s traditional approach has helped it stave off fast-food competition, he says.

“We’ve been amazed through the years. Here we are, a single, family-run operation of 2,000 square feet, and our business has stayed steady and strong,” says Smith, who was 18 when his parents, Freeman and Margaret (Peggy) Smith, moved the family to Orlando from Detroit.
Despite having no restaurant experience, “they jumped into the business hand over fist together,” recalls Smith, who studied at Seminole Junior College (now Seminole State) and then Florida Technological University (now University of Central Florida). He and his brother, Ken, worked at the restaurant while in school. After school, Ken joined the Navy, while Roland left college, became a Beefy King manager, and “here I am, 52 years later.” 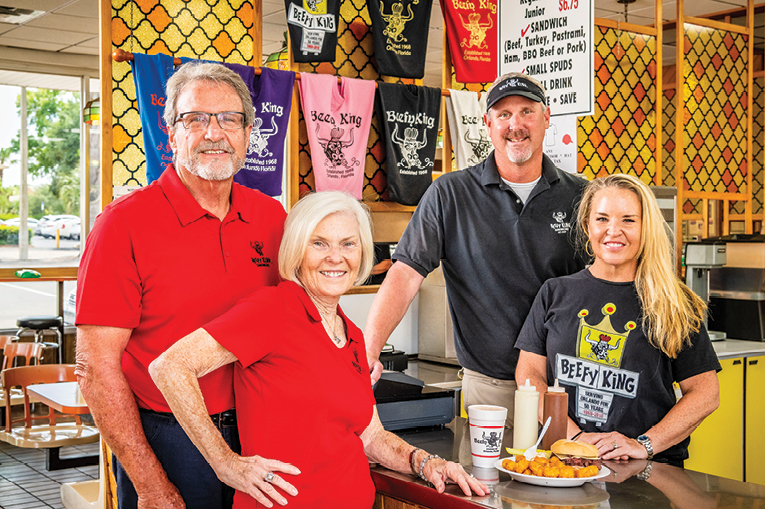 The 1960s sandwich menu was smaller—just roast beef and ham and cheese. Over the decades, Smith added turkey, pastrami, corned beef, chicken, BBQ beef and pork, specialty sandwiches like the hot Reuben, and two-meat combos. “But the actual concept of how the sandwiches are made and served is exactly the same,” he says.

Smith’s daughter Shannon and her husband James “Woody” Woodrow, co-owners with parents Roland and Sandee, have run the restaurant with a dozen or so employees for two decades. They faced some tough stretches after a 2019 fire set in the middle of the night by an arsonist shut down the operation. Soon after, the pandemic struck, and drive-through business was key.

“My parents help us tremendously,” she says. “However, the fire, and then COVID, really forced us to step up in a big way so my parents didn’t have to feel stress. It’s been a big three years for us, that’s for sure!”
During that time, the Beefy King family learned how devoted and powerful the Orlando community could be, Smith says, noting the restaurant was revived and running just eight days after the fire. Contractors, local officials, city planners and loyal customers all contributed to a fast clean-up and renovation.

“My life is the business, the customers, the employees,” says Smith, 71. “Ninety-eight percent of our business is local customer support. They got us through the fire; every time I talk about it I can’t get through it without getting choked up. It shows what Orlando means to us as a family.”