Orlando’s Black-owned restaurants boast an incredible array of flavors, from Jamaican vegan to traditional soul food. Where to begin? We went to the dining experts. 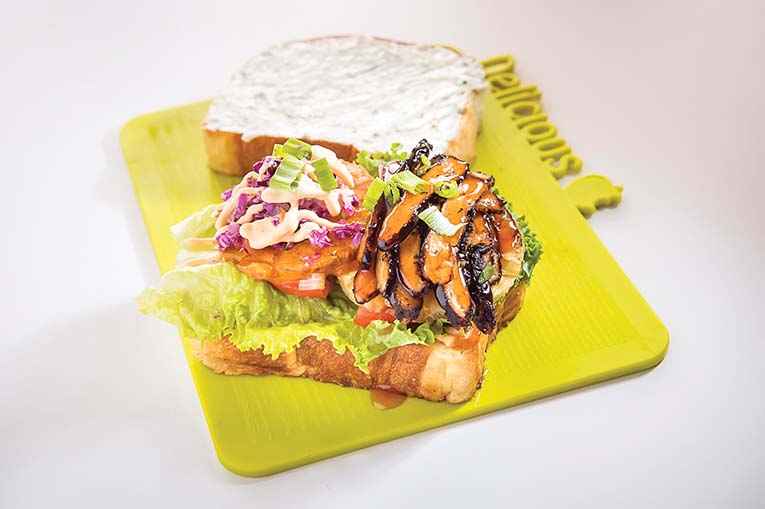 The Identity Crisis sandwich—featuring half Jerk Chick’n and half Buffalo Chick’n—is one of the vegan delights at DaJen Eats. (ROBERTO GONZALEZ)

Black-owned restaurants and bakeries—and the diverse mixture of flavors, styles and cultures they represent—are thriving in the Orlando area. We asked several local food critics and lifestyle experts to share some of their favorite African American eateries and the dishes that are offered. (Because of the COVID-19 pandemic, call the restaurants or check their social media pages to determine if they’re offering dine-in, takeout and/or delivery.)

Chef Jenn Ross has carved out a delicious spot for herself and legions of fans with DaJen Eats, where Jamaican-inspired dishes are reimagined through a vegan lens. Ross’ passion and love for her craft are evident in every bite, from Jamaican Jackfruit Sliders to non-dairy sweet treats.

Ricky Ly of TastyChomps.com recommends the eatery for its creative take on beloved favorites. “Chef Ross draws from her grandmother’s Jamaican home cooking to bring together the spices and flavors of the Caribbean,” he shares. But it’s the fun flair that keeps her guests coming back. “People line up here for the ‘Identity Crisis’ sandwich—half Jerk Chick’n and half Buffalo Chick’n, bringing together the best of both worlds.”

Lifestyle blogger David Plowden of DavidsManor.com agrees. Discovering the eatery opened a whole new world of possibilities—just as he was undertaking a massive overhaul to his diet. “I completely cut out all dairy and red meat, so DaJen Eats has been a lifesaver for me,” he says. But it isn’t just the “clean” menu that appeals to Plowdon. The flavors resonate as well. “I was ecstatic to discover that DaJen Eats was founded by a Jamaican native. Since I grew up in a Caribbean household, I was familiar with many of their dishes. I vividly remember indulging in jerk chicken dishes in my childhood, so you could only imagine my surprise when the DaJen Eats staff introduced me to their vegetarian Jerk Chick’n entrées.”

When it comes to sweet treats, Christina Thomas of GoEpicurista.com enjoys a good cupcake as much as the rest of us, but it has to be something special. She discovered just such a confection at B Cupcakes.

Previously a guidance counselor, owner-baker Sheila Norton now inspires her community to “B Sweet, B Happy, B You” in a different way.

Thomas first came across B Cupcakes when she interviewed Norton years ago for an article, and she’s ecstatic that the baker continues to offer her favorites at the Apopka shop. Cakes here come in all shapes and sizes, from bite-sized mini cupcakes, to cake pops, cake jars, and full-sized celebration cakes.

Norton features 20 flavors daily, but Thomas says that her favorite, hands down, is “The Elvis.” The banana cupcake is topped with peanut butter cream cheese frosting before it’s dipped in chocolate ganache. “The flavors are perfectly balanced; they’re rich but not overly sweet,” Thomas says. “If you’re bored with banana bread, this one has fresh banana flavor with yummy cake texture.”

If you’re looking to leave your cares behind, Thomas suggests sampling B’s line of “boozy cupcakes.” Infused with Bailey’s, Kahlua, and even Hennessy, the 21-and-over confections “make us smile most,” Thomas enthuses. 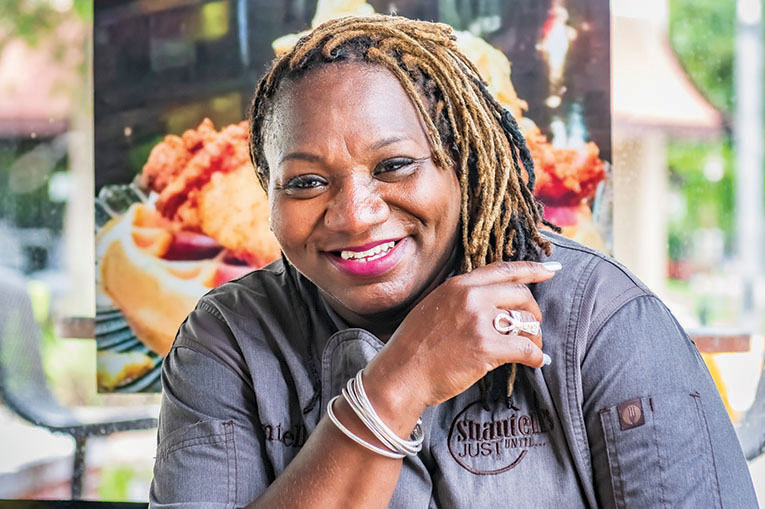 When you enter Shantell’s, you’re embraced as family. A wide array of soul food is served at this eatery, along with a big side of charm.

“I love the food at Shantell’s Just Until… Shantell Williams’ Fried Chicken is the best in town, and her hot wings do not skimp on the spice,” shares Kendra Lott, author of Unique Eats and Eateries of Orlando.

But there’s something else that makes Shantell’s shine—Williams herself and her philosophy of building community. On Wednesday evenings, she hosts “Talking Taboo,” and welcomes one and all to ask each other “hardball questions” about everything from politics and religion to race relations and community issues. And her sense of adventure is a marvel to behold: Four years ago, Williams took in 48 states in 27 days solo on a Harley Davidson motorcycle. This year, she’s making a similar journey,  but on this trip she’ll be accompanied by a film crew with an eye toward a documentary called Shut Up and Ride.

For Lott, it’s easy to see why Shantell’s stands out: Williams and her husband, Cobbin McGee, are excellent hosts who make everyone feel special. “It could be Mother’s Day or a random Tuesday, and you’ll find one of them sitting down to talk with a guest or introducing guests to one another over a glass of lemonade spiked with a gratis splash of coconut rum. Much like that cocktail, Shantell’s Just Until… goes down easy.”

Lisa Wilk, best known to her followers as TasteCookSip.com, appreciates the fresh, inventive flavors that she finds at Mockingbird. Together with Chef Michael Camacho, Chef Albert DeSue has honed his progressive pop-up concept, which places a premium on hyper-local ingredients and inventive takes on Florida flavors.

Wilk recently caught up with Chef DeSue at a pop-up hosted by Kaizen Izakaya restaurant in Downtown Orlando and was bowled over by the experience. “I enjoyed every single bite as we chatted over mouthfuls of his ‘Grilled Waffles,’ ” Wilk says. “The elegant yet unfussy creation hit on all the right flavors and textures at once. Crispy and airy olive oil waffles were topped with lemon-zested creme fraiche, a mound of superb salmon roe and a dusting of fresh herbs. I didn’t leave one bite on the plate.” 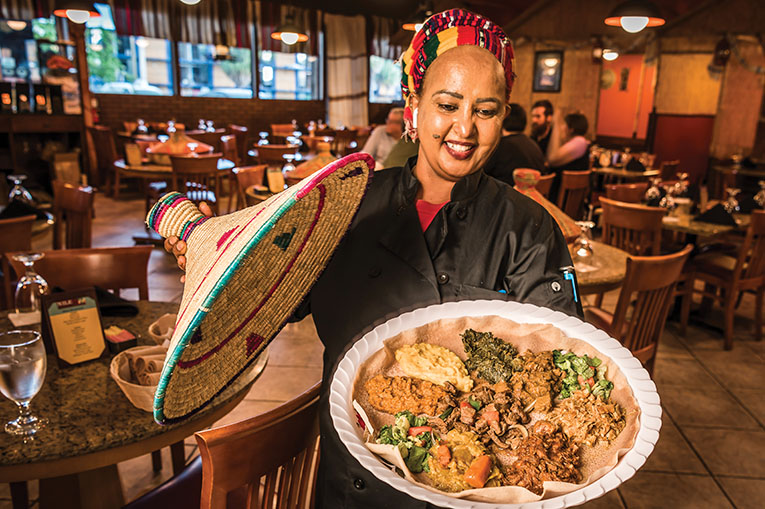 Abeba Gonetse opened Nile Ethiopian Restaurant after observing that the Orlando food scene could use a bit more diversity. In an interview last year with Joseph Hayes, Orlando magazine’s dining critic, she elaborated: “It came to mind that Orlando needed a different restaurant. I worked as an accountant in Addis Ababa, but I like to open my home and to cook. So why not?” What impresses Hayes is the passion for sharing culture, and for the food itself, which shines through. “It’s clear that Gonetse cooks from the heart,” he explains. “She identified a need in our dining scene, and she knew that she could fill it.”

That was in 2006, and Gonetse never looked back. She incorporates authentic spices imported from Ethiopia into her scratch dishes, many of them made with organic ingredients. The flour she uses to make her injera bread, a sourdough flatbread that’s a staple of Ethiopian and Eritrean cuisine, also comes from home.

If you’re exploring this hidden gem for the first time, the Chef’s Special Combination offers a great introduction to well-known dishes like Chicken Doro Wat and Beef  Tibs. Also, don’t skip the coffee service, featuring house-roasted beans that are ground by hand with a pestle before being brewed in traditional fashion and served with plenty of sugar. The ceremony, which celebrates friendship and mutual respect, is the perfect way to end a meal at Nile.

Chauniqua Major-Louis is a local public relations consultant, content creator and entrepreneur. As founder of Eat Project Pop, her own line of vegan and gluten-free kettle corn, Major, as she’s known to her friends, is passionate about delicious, healthy food. And right now, Joe’s Oat Patties tops her go-to list.

The family-owned business, founded in 2008, specializes in flavored plant-based meat substitute mixes that can be used to make patties, links, meatballs or crumbles. They also sell pre-made patties in a variety of flavors, including BBQ, Island Jerk and Maple Breakfast Sausage, to name a few.

On their Burgers & Booch food truck, the company offers an inventive array of snacks and entrees. “They serve up the best fries made from burros, a type of banana,” Major shares. But when she can’t catch up to the food truck, she heads to Downtown Orlando, where Craft & Common features Joe’s Oat Patties on their Vegan Breakfast Sandwich. “This sandwich, served on a pretzel bun, is delish!” says Major. Having sampled it recently, I wholeheartedly agree. 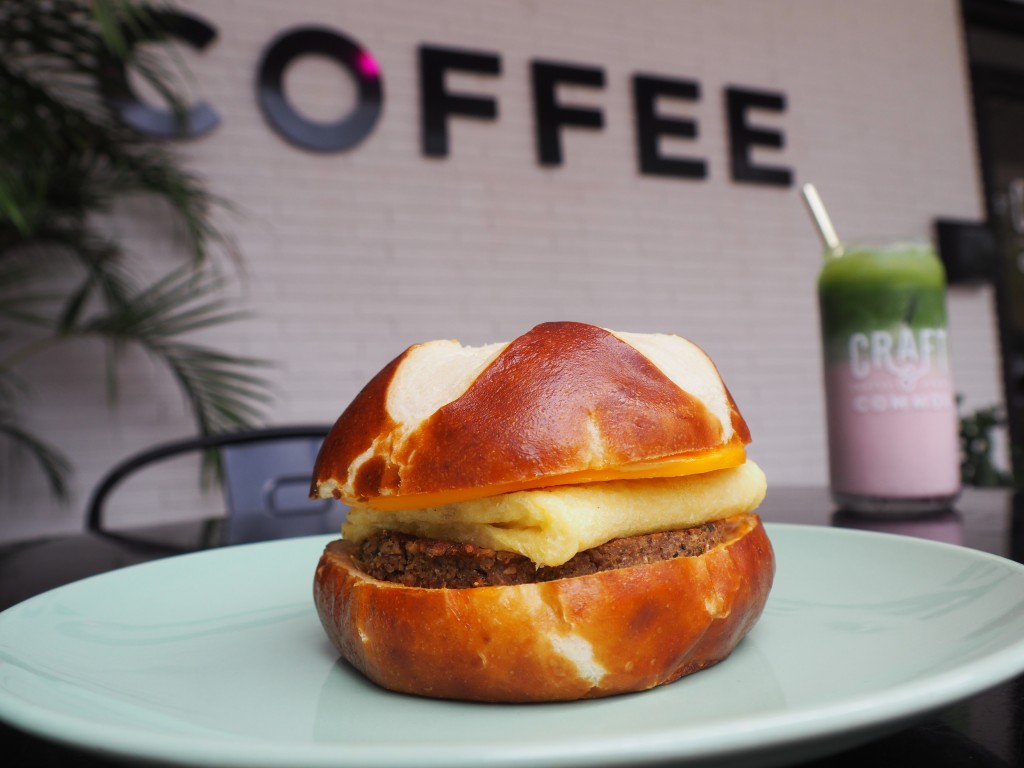 In addition to the food truck and Craft & Common’s breakfast sandwich, pick up Joe’s Oat Patties at Health Basket in Mount Dora, and at Chamberlin’s. They also offer delivery.

No exploration of African American-inspired flavor in Orlando is complete without a visit to Nikki’s Place in Parramore, where Chef Nick Aiken Jr. has been serving Southern cuisine for breakfast, lunch and dinner since 1999.

Customers love the scratch dishes and reasonable prices, as well as the myriad menu choices. And can you ever go wrong with meatloaf as good as your grandma makes? (Don’t tell her I said that.)

Lisa Wilk agrees, and she also loves that this local institution stays true to its roots, even as it has adapted to the times. For example, vegetarians will find hearty sides that offer full flavor—and no meat. Nikki’s collard greens, black-eyed peas and green beans are all veg-friendly. Enjoy them over white rice or with a side of fantastic mac and cheese, and you’ll never know what’s missing. 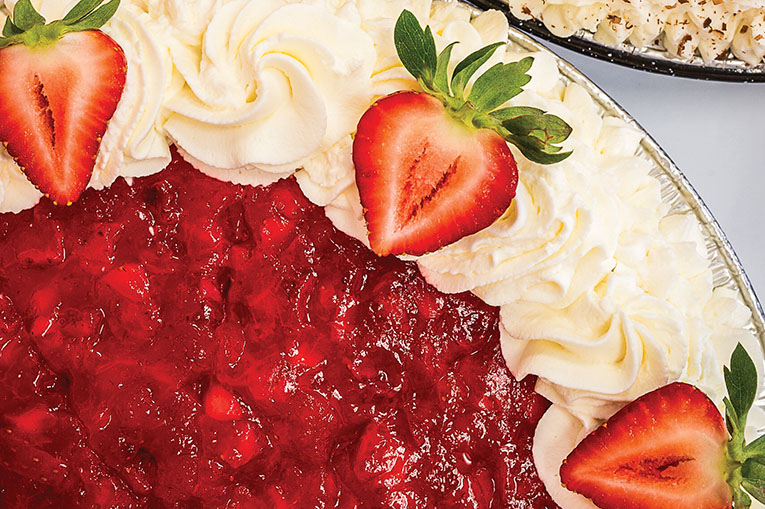 A fixture in the SoDo District, Sister Honey’s has been Orlando’s one-stop shop for delectable confections since opening in 2012. Named for owner and pastry chef Evette Rahman’s mother, the bakery offers its bounty of cakes by the slice, as well as other baked goods.

Rahman, recently inducted into Orlando magazine’s Dining Hall of Fame by dining critic Joseph Hayes, believes in using  superior ingredients and making the final product the best it can be. Hayes says this commitment to perfection is the secret to Rahman’s success, and she has countless world and national baking awards to show for it. “There’s no doubt that Evette is doing this because she loves it,” Hayes says.

While you can stop by the shop for a slice, ordering whole pies and cakes requires 72 hours’ notice. Want to share a taste of Sister Honey’s with far-flung friends? Rahman’s famous Ruby Rum Cake is available for shipping nationwide.

Here’s where to find the local food and lifestyle experts who shared their passion for Orlando’s diverse food scene.