Mi Casa Tequila Taqueria at Rosen Shingle Creek dazzles with a chef from Hawaii who is a wizard with Mexican food.

Harris Rosen—hotelier, philanthropist, restaurateur—likes to eat. You can tell by the variety of restaurants he puts into his hotels, spanning the world of delis, tapas, sushi, fine dining and casual snacks. At his massive Rosen Shingle Creek resort, the half-dozen eateries range from A Land Remembered, a Florida-themed steakhouse, to Café Osceola, a buffet-driven restaurant (Rosen is a firm believer in the value of buffets).

There’s also this unassuming gem: Mi Casa Tequila Taqueria, a simple 60-seater tequila bar and casual restaurant. It may not be the largest, or fanciest, place to eat on property, but it’s helmed by an ex-Army Airborne Ranger from Honolulu who cooks Mexican food as if he were born to it.

Chef Cameron Hostellero, who’s usually behind the counter in the small open kitchen, comes from a family of food folk. “My aunts and uncles are all in the restaurant business,” he says. From his Army career, Hostellero segued from jumping out of airplanes into cooking at the Marriott World Center in 1986. He’s been at Shingle Creek since 2007. “I wanted to do something different,” he says of Mi Casa. “Not limit myself to the Pacific Rim cooking that people might expect from me. I find Mexican food very exciting.”

The menu explores various regions of Mexico, from the seafood-rich coasts to corn-based Central dishes to countrywide ceviche and guacamole. Rubs and marinades for beef and pork are made fresh, and the in-house butcher supplies various cuts of meat. The food is what you might call, as Chef Cameron does, “nearly authentic. We started out serving very traditional dishes,” he says, “but people, our big tourist traffic, wanted tacos and quesadillas, so we adapted to an American taste.” 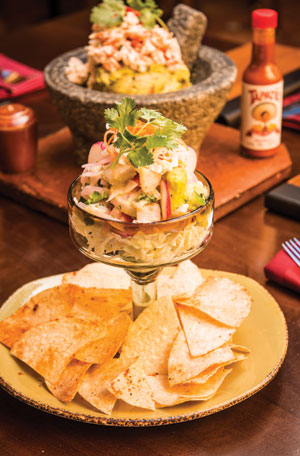 That’s not to say that Mi Casa compromises on taste or originality; one forkful of Flounder Vera Cruz ($22) will prove that. A large portion (they’re all large portions) of lightly coated fish is topped with flaked crab, avocado and a slaw of pickled cabbage, carrots and onions, surrounded by a robust red sauce and sneakily spicy salsa verde. A lovely discovery is the sweet and tart side dish of roasted butternut squash and quartered tomatillos, an idea I’m stealing for my table. Flounder reappears in the ceviche ($14), marinated in lime, sweet cucumber, spicy Serrano chiles and tomato.

I think I liked the accompaniment as much as the steak in the filet tostada ($24). The chipotle pepper-rubbed Angus filet was seared well and richly flavored, but I almost pushed it aside for the tostada, a sort of Mexican lasagna layering fried tortillas with melted Manchango cheese and rich salsa rojo. Another standout, Chilaquiles Carnita Nachos ($15), tops a baked tortilla pie with slow roasted chicken, mild queso blanco cheese and hearty chorizo sausage. The additional smoothness of avocado and crunch of toasted pumpkin seeds adds some interesting textures.

Tacos and enchiladas are on the menu for the lunchtime and after-work crowd that favors a fast meal—and a generous margarita made with the selection of fine sipping tequilas—at the tables outside the main dining area (plans call for an outdoor patio). I liked the Tacos de Camarones ($16) of shrimp served with chiles and crumbly Cotija cheese. And if you crave a breakfast-like dish, the Carne Asada con Chilaquiles ($20) of baked tortillas and cheese topped with a grilled steak and sunny-side-up-egg should satisfy the urge.

The room is rather cozy for a hotel setting, and service is friendly and swift. You’ll enter looking for a quick, familiar bite, but the sophistication and craft at Mi Casa might surprise you.

This article appears in the July 2013 issue of Orlando Magazine.
Categories: Dining