Luke’s Kitchen and Bar Continues To Shine In Maitland

With a firmly established foundation, Luke’s Kitchen and Bar is poised for growth. 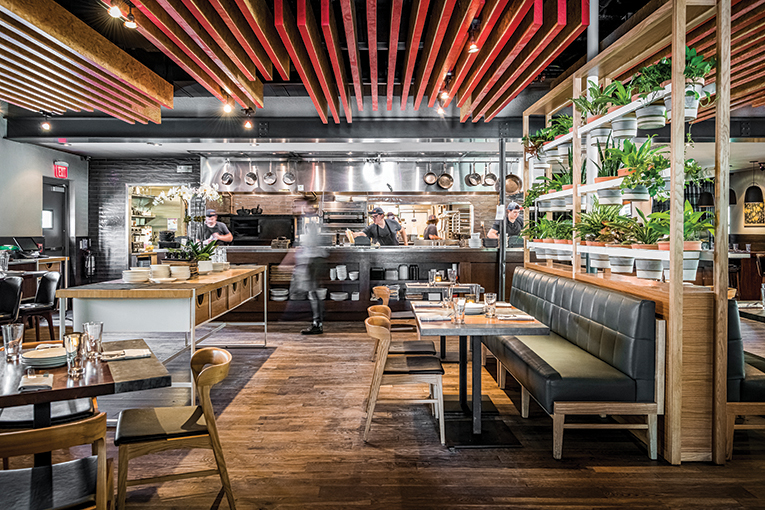 The interior of Luke’s features a warm, modern farmhouse feel with an exhibition kitchen highlighting all of the action.(ROBERTO GONZALEZ)

Walk through the door at Luke’s Kitchen and Bar and the convivial atmosphere envelops you like a soothing breeze on a warm Florida evening. This Maitland restaurant with a neighborhood feel by local restaurant group Park Lights Hospitality has spent nearly five years burnishing its local shine, and it’s paid off: Recently, it earned the Orlando Sentinel Foodie Awards critic’s choice honor as 2021 Best Overall Restaurant.

Luke’s visionary chef-partner Brandon McGlamery is humble about the accolade. “Once we were able to get our footing, we found our true identity. It takes a village to run a restaurant and, when the village is in harmony and everybody is doing great, it’s exciting,” says McGlamery, who led Park Lights’ Luma on Park (now closed) and Prato restaurants to acclaim. “The spotlight is on us even more now, and we have to raise the level even higher.”

McGlamery’s vision to nurture and grow Luke’s Kitchen and Bar involves a plan that would expand the restaurant’s covered patio and adjacent space and add an outdoor kitchen with a fossil fuel element, possibly charcoal, “different from the Florida wood-burning oven we have inside already—to give another dimension to the menu to allow it to grow. 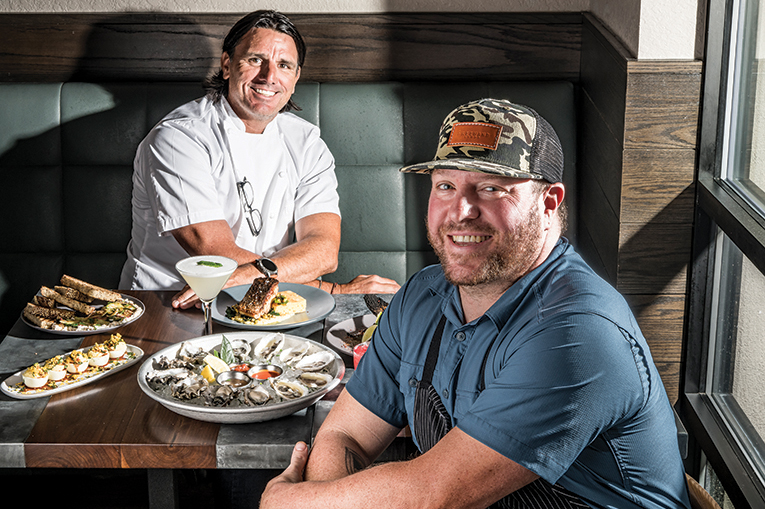 “People want to be outside. They want the open-air feel, and we want to give it to them,” he adds, pointing out that the eatery’s patio with retractable roof and its picnic-table-dotted lawn are in high demand for bookings.

An Orlando native and Le Cordon Bleu grad, Campbell’s local career picked up steam at James and Julie Petrakis’s Ravenous Pig in 2008; soon after, he was named chef de cuisine at Cask & Larder. In 2014, a move to Cincinnati meant a chef de cuisine role at 21c Museum Hotel’s Metropole. Within a year, Campbell was named executive chef of 21c Museum Oklahoma City, where he snagged two consecutive “Best Chef” awards. In 2019, he was eager to return to Central Florida and join McGlamery’s team.

For Luke’s, Campbell curates sweet Panhandle-farmed oysters from Sublime Oyster Supply (“a smaller, cleaner oyster in the bay where the waters are moving constantly”) and fresh produce from Ocala’s Frog Song Organics. His culinary team expertly prepares high-quality meats and fish from Florida and Caribbean waters on the woodfire grill. And Campbell creates dishes based on regional culinary traditions—but with a twist, like the menu’s Southern-inspired Redfish, served with corn puree and Swiss chard. Menu items vary seasonally. 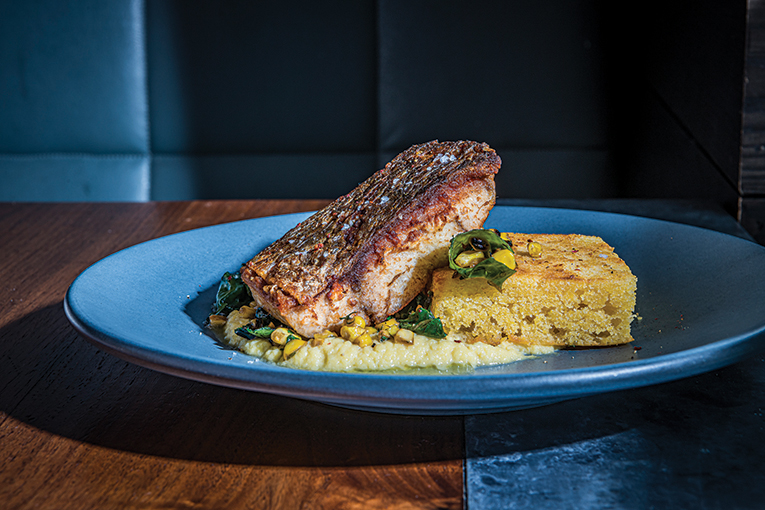 Redfish with cornbread and a corn purée (ROBERTO GONZALEZ)

“It gives everybody a breath of fresh air to know that something new and exciting is coming,” says Campbell, explaining his culinary approach. “We source the freshest ingredients that are as local as possible to provide something familiar and fun but with a twist that’s out of the ordinary.”

I’ve visited Luke’s several times since the restaurant re-opened to diners, most recently for Sunday brunch with a friend. Seated inside with a view of the open kitchen, we started with a beautifully plated serving of Smoked Fish Dip, a sublime flavor meld enhanced with celery, cucumber, radish and a sprinkling of pickled mustard seeds that allowed the fish to shine. We devoured it spread on grainy millet toast points from Orlando’s Olde Hearth Bread Company. From the bar, my bubbly Mango Bellini offered a sweetish contrast to the smoky fish, and my friend enjoyed a robust Bloody Mary. For my brunch entrée, I chose the Egg Soufflé with tender Key West Pink Shrimp. Seasoned with chives, dill, tarragon, parsley and topped with a rich shellfish hollandaise, the flavors were so  exquisite that I toted the leftovers home to devour later. The savory souffle went on hiatus during the dog days of summer but is expected to return this fall. For summer, Campbell has replaced it with the lighter Rye Crepe encasing clams, charred corn, oven-dried tomato, green beans, herbs and corn cream, made with juice of the freshly steamed clams. “It’s a nice, light option,” Campbell says.

During a recent anniversary dinner, my husband and I couldn’t resist celebrating at a patio table as the sun began to set. I paired our BBQ Deviled Eggs appetizer with a White Linen hand-crafted cocktail of Hendrick’s gin, St. Germain elderflower liqueur, white cranberry and house sour, a drink so popular at Luma on Park that it was transferred to Luke’s menu. The deviled eggs were addictive, and we sopped up every last drizzle of sauce with the perfectly seasoned eggs. My Cobia, served with broccolini, was a buttery, lemony delight paired with a favorite New Zealand sauvignon blanc. My husband’s New York Strip was cooked to perfection on Luke’s woodfire grill—the tool that Campbell calls “the heart and soul” of his kitchen. “Live fire is the original way of cooking, and you can be very delicate with it,” he says. 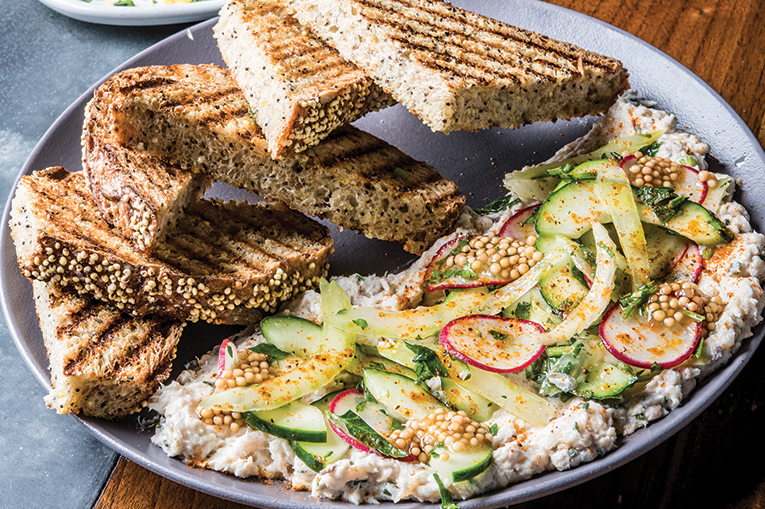 In fact, it’s the ideal way to prepare a starter familiar to Luke’s regulars: Blackened Fresh-catch Fish Collar. “When we butcher fish, we use everything possible, including the bones for stock and the collar for an appetizer,” Campbell says. Local food writer and editor Pam Brandon raves about the tender fish collar, as well as the fish dip and the raw bar offerings. “When I want fresh oysters, I head to Luke’s as they source my favorite Florida oysters—small, bright and briny,” she says.

Beyond the kitchen, Luke’s servers take the bar program seriously and enjoy suggesting pairings of wines, cocktails or craft beers on draft. “Besides the food, our cocktail program is a shining light for the restaurant,” says general manager Ali Anderson, who also oversees the wine program. Anderson might suggest a Loire Valley Muscadet to pair with raw oysters. “A lot of people are ready to order their standard chardonnays and cabs, but I love to point out the underdogs that shine with our food,” Anderson says. “They know they can come and get the classics they’ve fallen in love with, but they also have the ability to branch out a little bit for a fun experience.”

Last year, when pandemic rules barred in-restaurant dining, Luke’s adapted with a takeout and delivery menu, including cocktails and other libations. Maitland resident Anthea Turner, who lives around the corner, says Luke’s stepped up in style. 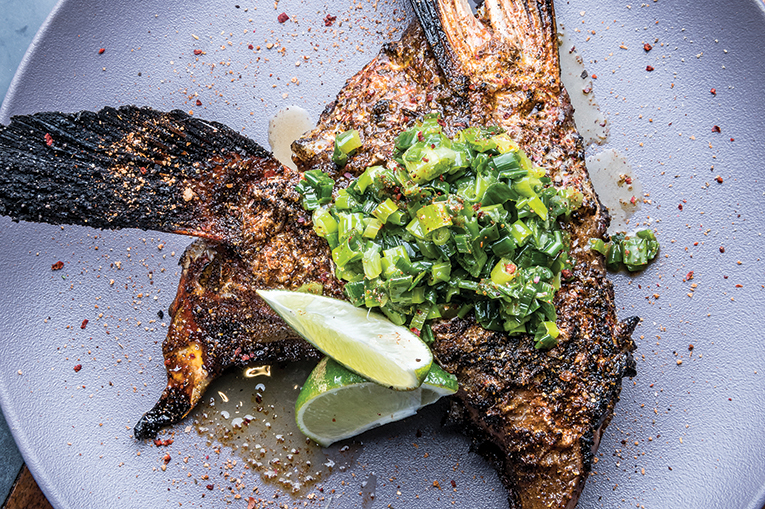 “All of our neighbors frequent Luke’s often, and it was great during the pandemic because takeout service was fabulous,” says Turner, who’s back to visiting the restaurant frequently. “Their food is very creative. What’s really fun is to share a lot of starters, and the soups are innovative. I love good fish, and they have so many choices.”

Her daughter, Holly Martin of Brevard County, swoons over the Chocolate Cheesecake with Sea Salt and Cocoa Nib Brittle: “It’s big enough to share, but why would you?”

This fall, perennial favorites like the seasonal crispy fried Brussels sprouts will be back on the menu. Expect to see dishes featuring squash and pumpkin, too, Campbell says. McGlamery, who makes time to visit farmers and fish markets between work on new projects, is passionate about supporting local purveyors. “We want to cook like we’re cooking from the garden that we have. You can always have a chicken breast, but it’ll change with the seasonality,” he says. “We never want that chicken to lose its luster, so we change the seasonal ‘pop,’ or the canvas, around it.”

We’ll keep returning to Luke’s for those seasonal delights, the local vibe, drinks at the bar and the exceptional hospitality we’ve experienced thanks to pros like Vinny, our brunch server, and Jacob, who made our anniversary dinner extra special. Maybe we’ll even book a group of friends at a picnic table where we can play a game of cornhole, available to diners on the lawn.

“This goes back to the point about Luke’s being a neighborhood place,” McGlamery says. “We wanted it to have layers, kind of like an onion has layers. You can peel it back to get what you want.”

This article appears in the September 2021 issue of Orlando Magazine.
Categories: Culinary Spotlight, Dining, Food & Drink
Tags: Brandon McGlamery, Luke’s Kitchen and Bar
Want to read the whole issue? Download and read this issue and others on Magzter.