Some bear goofy names, but the sandwiches, soups and salads at That Deli are seriously good.

The autographed pictures and rock star memorabilia on the walls of That Deli in Lake Mary are an indication that That isn’t your typical strip mall lunch counter. Rock music and occasionally high-volume conversation compete for attention with the house-made soups and mile-high sandwiches, but the fresh and filling food usually wins.

Owner/chef Roy St. Pierre, 53, has been working in kitchens since he was 14. While operating a successful catering business in South Burlington, Vermont, he was asked to fill in for a friend to cater a concert for the Southern rock band Widespread Panic in 2000.

That connection led to jobs for other touring bands, supplying meals for the likes of Ringo Starr, Lyle Lovett, BB King and Bob Dylan, and catering the Burlington Discover Jazz Festival. But an attractive job offer for his wife was the convincing factor to leave the snow of New England for the sun of Central Florida. In 2009, boredom and the chance to give his children steady jobs brought St. Pierre out of his short retirement to open That Deli. “I said, ‘I’m going to open a restaurant’,” he says. “But I’m not gonna not have fun.”

There are banquettes and tables, but the best spot in the long, narrow place might be at the surprisingly deep and comfortable stretch of counter facing St. Pierre’s workspace, where he cuts and assembles sandwiches and salads every day. “It’s like a bar,” he says, “except we serve food instead of alcohol.” He likes keeping up with his customers as he works. “We talk politics, sports, whatever.”

While there isn’t room to cook meats from start to finish, St. Pierre says he orders the best of what’s available whole, and slices cold cuts to order. Turkey is roasted on the premises, chicken is poached, and soups and condiments are made from scratch every day. St. Pierre claims to have 300 soups in his repertoire, rotated on and off the menu. On the day I visited, a thick, loaded and obviously homemade bowl of tomato, turkey and tortellini soup ($5.29) was being offered.

It’s a tribute to St. Pierre’s cooking that I devoured the Sunshine State Special chicken salad sandwich ($9.29), chunky and tender white meat chicken coated in tangy cranberry mayo, served on rye (my choice) with cucumber, sprouts and slivers of red onion. It’s a tribute to the size of the sandwich that I had the other half for dinner—the thing is jaw-unhinging enormous. 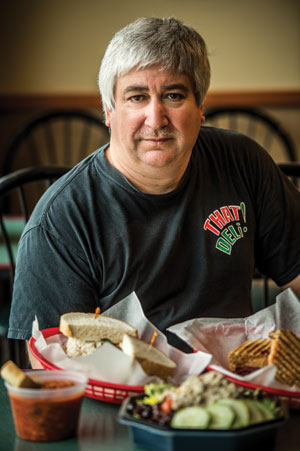 The Reuben Tuesday ($9.29), a classic hot corned beef, sauerkraut and Swiss cheese melt, was almost as big and comfortably warm. Each item not only has a rock name but an explanation; the Reuben is “Mick Jagger’s last request”; the “Postrami Mommi” (St. Pierre’s spelling), a massive hot pastrami and Havarti assemblage, is tagged with “You know you want your mommy.’’ Okay, he’s a cook, not a comedian. The name Socket Toomy ($8.59) might be completely lost on some customers, but the tomato fan stuffed with albacore tuna, black olives and cucumbers will hit the mark.

St. Pierre’s kids still work at the deli. The fun little restaurant garnered three first-place slots in this year’s Orlando magazine dining awards for Best Take-Out, Sandwich and Best Kept Secret. So while he seems to be having fun, Roy St. Pierre is also making food worthy of a standing ovation and an encore.

This article appears in the July 2013 issue of Orlando Magazine.
Categories: Reviews