Barbara Alfano and Elisa Scarpa come from different worlds in the home country. But they strike a common chord when it comes to authenticity in their culinary creations.

Barbara Alfano, blond and soft-spoken, is the owner/chef of a narrow trattoria hidden among big restaurants in Dellagio Town Center on Sand Lake Road. She is from Calabria in southern Italy, an area surrounded by ocean at the toe of the boot. In a languid land of olives, honey and Bergamot oranges, the Calabrese commemorate almost every local food with festivals: swordfish, sausage, pasta, onions, and a celebration of the hot pepper, the Festival Del Peperoncino. Not surprising, then, that Alfano’s restaurant is called Peperoncino.

Dark haired and lean, Elisa Scarpa owns Fatto in Casa, (“homemade”), crafting Italian cookies and cakes for special order in her home kitchen. She grew up outside Turin, in the far northwest, a bustling river city with the Alps for a back yard. The Piedmont region (Piemonte in Italian) is known for deep flavors—truffles, mushrooms, hazelnuts, chocolate and slow cooked meats. If there is an Italian word for the savory taste the Japanese call umami, it originated in Turin.

It would be difficult to get any farther apart and still be in the same country. But these two women share a fierce passion for authentic food and a desire to share it with us. Bringing them together for the first time for a conversation at Alfano’s restaurant made for an opportunity to unite them in their Italian-ness.

“I’ve been in this restaurant for one year,” says Alfano, 30, after an animated welcome to Scarpa in Italian. She came to America in 1999 when her father, a real estate agent, moved to Orlando. Scarpa, 44, started touring the States in the early ’90s during her former career as a professional barefoot water skier (she’s an Italian national champion), moving to the area in 1996. With no formal training, she started her business in 2009, “for fun, almost,” baking and cooking for friends.

“People said I should sell what I make and I thought, can I really do this? And apparently, I can!”

Alfano took the educational route. “I went to the Cordon Bleu. Owning a restaurant is not the same as cooking at home. But I love it. I feel blessed and lucky.’’
The two women say in harmony, “You wake up in the morning—”

“And you do what you love,” Alfano
continues.

“And you think, okay, here we go,” says Scarpa.

Where they go is a reflection of their native land. Scarpa combines sturdy but flaky crust and homemade sweet/tangy apricot marmalade in her crostata di marmellata di albicocche tart, and celebrates the delights of her hometown with brutti e buoni, lumpy little hazelnut meringue cookies that translate as “ugly and good.” The hazelnut, chocolate and honey baci di Alassio cookies are a kiss from the Ligurian coast.

Alfano, in a galley kitchen within easy reach of her diners, conjures up a dish of mare e carciofine, spaghetti with fresh fried sardines and sautéed baby artichokes that is a pure touch of Calabria. What may look like standard lasagna is, under Alfano’s hand, a layered feast of egg pasta, meatballs, spicy sausage, Italian ham, eggs, peas, two cheeses, fresh tomato sauce and béchamel, named after the main street in Naples (Spaccanapoli). For both chefs, what isn’t hand-made or locally sourced is imported from Italy, regardless of price.

“I come in every morning,” Alfano says, “and sit with my coffee and make the menu for the night.” Her lunch menu is constant, but every dinner menu is different. “Mostly I cook what my grandmas infused into me growing up in the south, but I consider myself an Italian food expert. I’ve studied—devoured—books, so I can do dishes from different regions. I can make a dish from Piemonte or Sardinia,” Alfano says proudly, “but there is always that splash of Calabria. Otherwise it is not me.”

Scarpa keeps her creations close to home, making sweet and savory dishes that reflect her upbringing in Piedmont. “Everything I make has roots in that area,” she says. “I very seldom venture outside my comfort zone.” 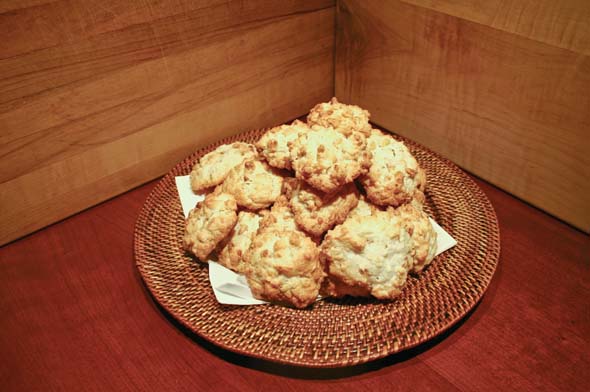 The two women wear several hats. Alfano studied political science at UCF before heeding the call of the kitchen, while styling hair at her mother’s salon in Winter Park. “I kept a few clients who don’t want to leave me,” she says.

On occasion, Scarpa swaps her chef’s toque for an accountant’s eyeshade. “I do the accounting for my husband’s construction company,” she says, “while I’m planning the growth of my business, which started with cookies, then desserts and cooking classes. I want to open what’s called a gastronomia, where you pick up everything ready to go.” She’ll have a space in the new East End Market in Audubon Park. “Soups, sauces, salads, depending on the season. That’s the goal.”
While Scarpa’s business stands on the edge of expansion, Alfano demands the control of a small space.

“My concept is this,” she says, pointing around the room. “This is what I want. This open kitchen, the small space—”

“This is cute as heck,” Scarpa interjects.

“I’m in that kitchen every night,” Alfano says. “I see everything that comes out. I can see every customer trying the first bite of their food. I control everything. In a bigger space I don’t think I can.”

“I feel the same way,” Scarpa says. “I have the last say of what goes out the door. I’m a little bit of a control freak, I think, but it’s my name on everything.”

“I am 100 percent with you,” Alfano says. “Some people don’t get the concept. People say, you’re an Italian restaurant but you don’t have pizza? I say, it’s not a pizzeria, it’s a trattoria.” The quest for authenticity when faced with diners familiar only with Italian-American versions, far removed from the original, is sometimes difficult. “We have a balance,” Alfano explains. “Spaghetti Bolognese is not a pile of ground beef sauce on top of two sticks of pasta. No, no, no, no, no. I have this explosive—”

“And sometimes…” Alfano shakes her head. “I presented you the perfection, if you don’t want it, it’s not my fault.”

“It’s more than just putting something in your mouth,” Scarpa says. “You have to teach your clients. I’m hoping to go to the next step, presenting wholesome food, have my clientele grow with me … It’s about sharing culture. I have one foot in Florida, and still one in Italy.” 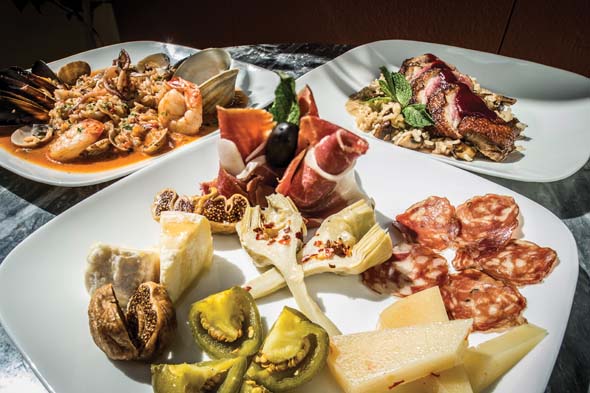 Alfano nods.
“This is my second baby,” she says, leaning in close. “This is my heart and passion I’m putting on their tables to enjoy. When I see them from my kitchen and they like it and they take pictures and they leave and say, thank you, that was awesome…”

This article appears in the April 2013 issue of Orlando Magazine.
Categories: Dining