Outside it’s an unusually chilly day, but inside, the temperature soars to about 108. Skin glistens as bodies in various levels of fitness pose—some achieving marvels of balance while others modify poses in a nod to the instructor’s admonition to “listen to your body.”

This is hot yoga. And if you can’t take the heat, stay out of the studio. But if you do, you may miss out on some significant benefits, according to its proponents.

Bikram yoga is the original hot yoga, a form always done in the same 26-pose sequence. “It’s scientifically proven that it works,” says Maria Canela, owner of Bikram Yoga West Orlando. “It’s a beginning yoga practice, and it works every part of your body in those 90 minutes.” 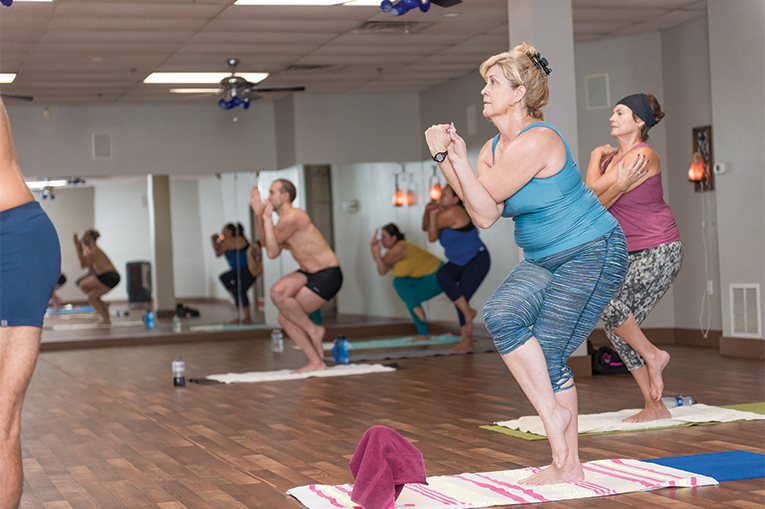 According to Canela, people from age 11 to 100 can participate and can burn up to 1,200 calories during a 90-minute class. The heat serves to relax your muscles—increasing strength and flexibility—and detoxes the body through sweat.

Bikram yoga student Jane Rutter, a travel professional, recently returned to her class after a bout with breast cancer. “I actually had no side effects from the chemo, and I put it down to being in such great shape from doing the yoga,” she insists. Another classmate, retiree Linda Lopez, does modified poses on her left side after partial shoulder replacement surgery while continuing to battle back and knee issues. “I just feel better. It eases all that pain,” she says.

Suleiman Musallam says he has experienced healing through hot yoga. The Orlando accountant suffered multiple disc injuries and tried hot yoga in a last-ditch effort to avoid back surgery. He attended bikram yoga classes once or twice a day for 30 days in early 2017 and now attends four classes a week. “It’s a commitment,” he admits. “After six months, I could say I was pain-free.”

Danielle Cosgrove is studio manager and an instructor at Warrior One yoga studio in Orlando, where hot yoga classes run about 90 degrees. “Hot yoga is especially beneficial for people who experience a lot of tension in their muscles, and it’s amazing for athletes who are training or for anyone who wants to feel good physically and have a clear mind,” she says. However, she also recommends that pregnant women or people with migraines, blood pressure issues or glaucoma check with their doctor before attending.

Warrior One student Stephanie Porta uses hot yoga to combat the stresses of working in social justice through her work with Organize Florida. Her experience “has helped me live a more fulfilled, well-rounded and peaceful life in many ways,” she says. Her journey began three years ago, when “I decided to try it out to really just kind of force myself to make time for myself and begin to be more intentional about self-care.”

Cosgrove and Canela suggest drinking plenty of water before, during and after a workout; eating something relatively light but nutritious before and after; and showering after class. “We sell electrolyte packets at the studio, and we educate our students on the importance of replenishing the salt and other minerals that you sweat out,” Cosgrove says.

“When you’re done with class, you feel like you really accomplished something huge, like you just did something extraordinary. You’re drenched in sweat, and you’re totally renewed,” she adds.