As 2021 draws to a close, we take a closer look at some fresh new faces and trends on the Orlando dining scene. 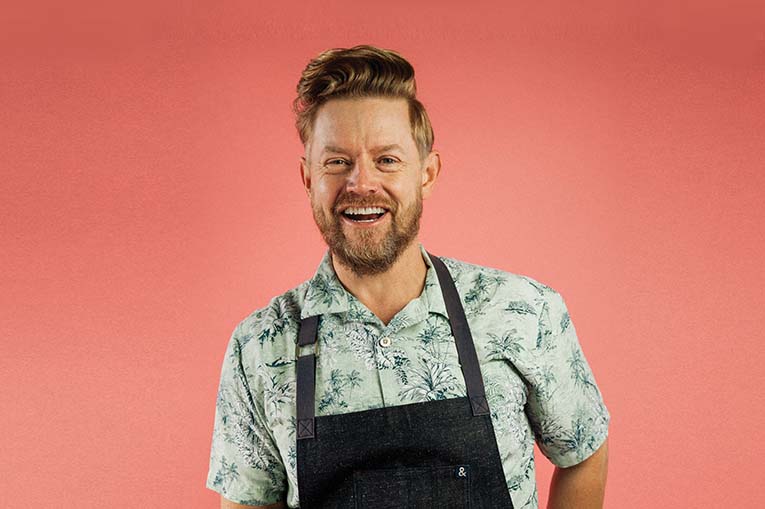 If you haven’t heard the news, Orlando is welcoming a brand-new celebrity chef to the fold. Richard Blais opens his new restaurant, Four Flamingos, A Richard Blais Florida Kitchen, this month at the Hyatt Regency Grand Cypress in the attractions area. The restaurant replaces Hemingway’s at the lush, sprawling resort.

Fans of cooking shows will recognize Chef Blais from his numerous television appearances. As winner of Bravo’s Top Chef: All Stars in 2010, Blais went on to write two cookbooks, and has appeared on Guy’s Grocery Games as a judge, among other shows. In 2022, viewers will find him with Gordon Ramsay on Fox’s Next Level Chef. Prior to his career in the spotlight, Blais attended the Culinary Institute of America, and honed his skills post-graduation at spots like The French Laundry, Daniel and Chez Panisse, among others.

While he currently resides in California with his wife and two children, Blais is happy to be returning to the Southeast—at least in terms of a business interest. “Florida has been a target of mine for a long time,” he explains. “My wife’s family is from Florida, so I’ve spent a lot of time here.”

Previously, Blais had also traveled through Orlando extensively with his corporate show, Stand Up Cooking with Richard Blais, which basically marries—you guessed it— stand up comedy and cooking. Those visits gave him a window into the Central Florida food scene. “I’ve gotten to know Orlando outside of the theme park zone, and I think it is a vibrant, community-based scene with lots of great chefs and businesses. And that’s really important to me: To be a great chef who happens to have a restaurant here, not a celebrity chef who just has his name on the door and is not going to be there at all.”

Blais is also aware that he’s going into a prime spot; Hemingway’s, the restaurant that previously occupied the space since 1984, was an award-winning guest favorite for seafood and special occasions.

His vision for the menu? Tropical. “Warm weather cuisine for sure,” he elaborates. The chef plans to evoke a postcard picture of Florida flavors, with an emphasis on classics done right. “There’s a reason that Key Lime Pie is a classic. Can you make it more creative? Probably. But there’s also nothing wrong with embracing the classics.” To that end, expect Florida seafood, especially varieties the state is known for, such as grouper, and seasonal seafood, like stone crab claws.

But Blais is leaving room on the menu for his personality to shine through as well. One dish he’s excited about debuting is a Tuna Tartare, a popular plate at Ember & Rye, his California eatery. But here, it will have a subtle nod to the region. “We’re going to replace the tostada with a tostone,” he explains, incorporating Caribbean dishes. Look for other regional flavors to inform the menu as well, like Orlando’s Vietnamese influences.

Diners will also find some healthier approaches to classics here and there. For instance, Blais’ take on Caesar salad dressing includes plant-based ingredients. “It will be made with coconut milk and cashew puree. It’s not healthy for the sake of being healthy, but because that’s how we like to cook,” he says.

Look for the creativity to extend to the bar program as well, which Blais sees as an extension of his kitchen. “I’ve found that when you’re really creative, people are much more accepting of it when it has alcohol or sugar,” he laughs. And because he doesn’t really imbibe, the chef plans to offer craft mocktails as well, capitalizing on a hot trend. “There always has to be one on the menu because I need something to enjoy during the night. And I love the fact that you can get all these flavors without alcohol.” 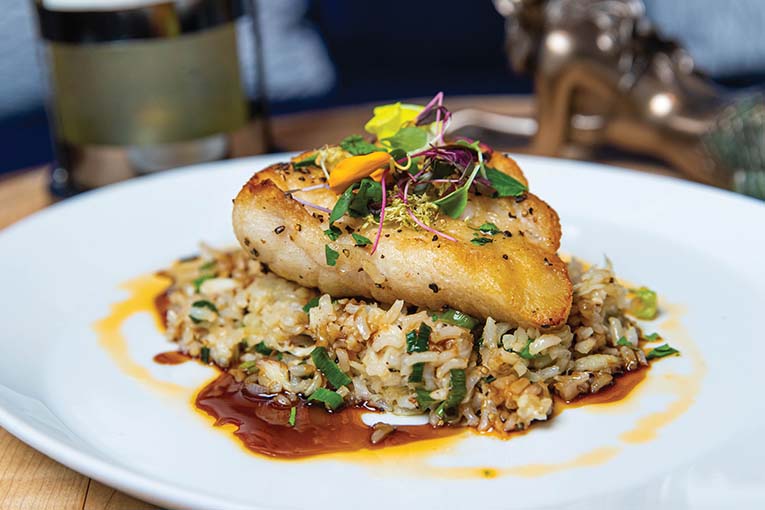 Seeking a new spot to try in Central Florida? Euphoria Fish House at Margaritaville Resort Orlando may fit the bill. The restaurant, located off of the resort’s main lobby, overlooks the grounds, and offers both indoor and outdoor seating.

Parrotheads will know that “Euphoria” refers to Jimmy Buffett’s beloved yacht of the same name—you can see a pic of the vessel as you walk into the lounge.

While the restaurant originally opened in 2019, it has recently undergone a rebrand, resulting in a more casual feel. Cuisine, while island-inspired, celebrates coastal communities.

The seafood-centric menu offers a nice balance of the familiar and the unexpected. During a recent visit, we particularly enjoyed the Cavatappi Al Forno, a decadent combination of lump crab, shrimp and Boursin cream sauce tossed with pasta. I also gave high marks to the Florida Grouper, served over crab fried rice and accompanied by a soy ginger glaze. I appreciated the fusion of Asian flavors with Florida ingredients. For dessert, don’t miss the Coconut Flan, with its fragrant coconut flavor and creamy texture.

Euphoria Fish House is a solid choice if you’re seeking a nice dinner in the Four Corners area. As Margaritaville and Sunset Walk continue to evolve, it’s exciting to see great options for this part of town, which backs up to the hot Horizon West community. 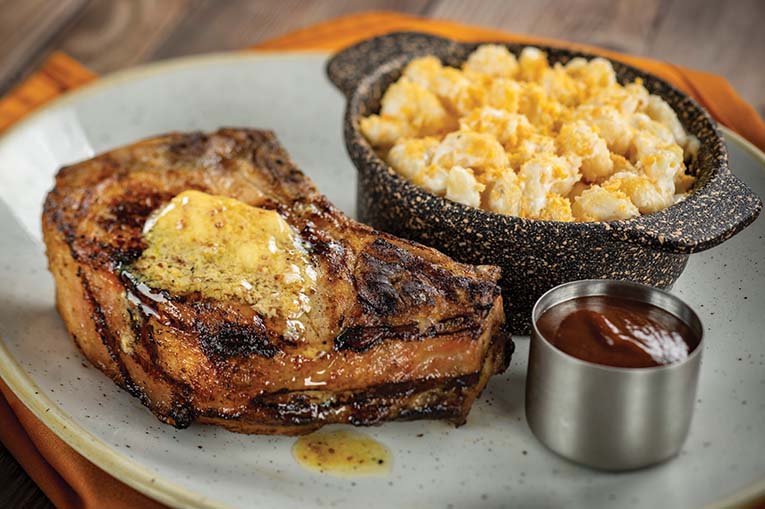 A trio of new concepts have opened at Walt Disney World, representing a wide array of genres and cuisines, with something to please every palate.

Disney’s Contemporary Resort has recently unveiled a renovation to its lobby, evoking all the mid-century splendor of 1971, to celebrate the resort’s 50th anniversary. Along with a new reception desk, murals and furniture, the lobby restaurant has also been reimagined. Steakhouse 71 replaces The Wave, and offers breakfast, lunch and dinner to hungry guests. Disney fans will note the significance of the name; Steakhouse 55 was a mainstay at Disneyland Hotel until this past summer, when news broke that it would close permanently. Disney World foodies may also remember that there was a steakhouse at The Contemporary previously; it closed to make room for The Contempo Café in 2008.

The new iteration promises to offer a healthy dose of nostalgia while also creating some modern takes on favorites. For hearty dinner fare, you won’t go wrong with an updated twist on Salisbury Steak. But it isn’t all meat and potatoes. The much-daintier-than-you’d-expect Wedge Salad is as tasty as it is beautiful. And guests looking for a plant-based option will relish in the hearty Vegetable Wellington, a pretty puff pastry-wrapped medley of savory mushroom duxelles and fire-roasted artichokes. Traditional breakfast favorites and some exclusive lunch items round out the day’s deliciousness. 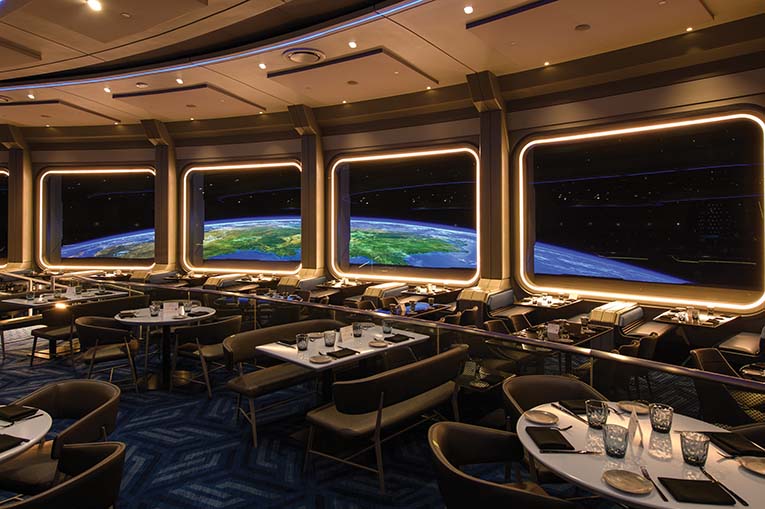 At EPCOT, soar 220 miles above Florida to dine at the Centauri Space Station at Space 220. The fine dining restaurant, located in the World Discovery neighborhood, offers prix-fixe menus for lunch and dinner. At check-in, adventurous diners receive their boarding pass and then are whisked away via a space elevator with stunning views of Earth trailing below them. Once aboard, take in a panorama of our planet, and keep your eyes peeled—you never know what else you might see!

Finally, in EPCOT’s expanded France Pavilion, La Creperie de Paris debuts with authentic flavors from Brittany. Enjoy a wide array of savory buckwheat galettes folded around fillings such as smoked salmon and crème fraiche; Raclette cheese, onions, bacon and Bayonne ham; and many more. Sweets come in the form of classic crepes, with everything from chocolate hazelnut spread to pear and chocolate. Wash the dishes down with imported French hard cider.

No time to sit down? No problem. La Creperie de Paris also offers a quick-service window for guests on the go. 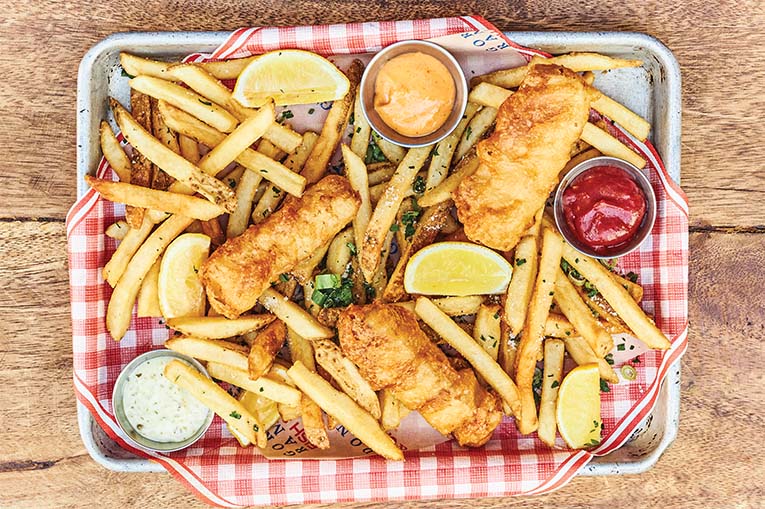 One of the UK’s most colorful chefs has opened an outpost right here in Orlando. If you fancy a taste of the British Isles, head to ICON Orlando to try Gordon Ramsay Fish & Chips. The colorful facade brashly announces that a bit of London has arrived stateside. Inside, there are plenty of options to choose from. Stick with the classic dish if you’d like; Ramsay’s take on fish and chips features sustainably sourced cod. Chips are another matter altogether. Choose “natural,” dressed simply with sea salt; or go in for the “dirty” version, which includes some delightfully diverse toppings, ranging from truffle to crisp chorizo. Other menu options include Ramsay’s signature “Fishwich,” as well as shrimp, lobster and chicken.

Elsewhere, we challenge you to visit Disney Springs and not see a massive line out the door for the crave-able chicken tenders and more at Chicken Guy. And don’t get us started about those sauces! But now, you can get your fix without venturing across town—or even leaving your car. Guy Fieri’s wildly popular fast casual concept is now open in Winter Park on Orlando Ave., just south of Fairbanks. In addition to the convenience of a drive-thru, guests can also take advantage of ample indoor seating.