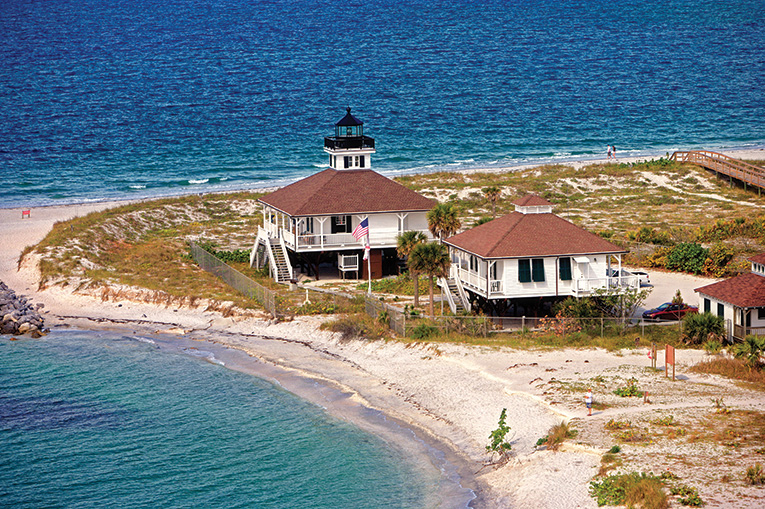 Its fairy-tale appeal makes Boca Grande the jewel of Gasparilla Island, a slender 7-mile-long barrier island between the Gulf of Mexico and Charlotte Harbor, with Gasparilla Sound touching its northern tip. A treasured hideaway that doesn’t make the news, the community has an affluent air about it—pristine and perfect—and its luxurious mansions with private piers jutting into surrounding waters hint at its well-to-do residents, many of them seasonal. (A quick real estate search brings up a stunning home on this swanky island with a price tag of $9 million plus.)

Boca Grande is the heartbeat of Gasparilla, best explored on foot, bicycle or golf cart, and the gracious Gasparilla Inn & Club is the town’s centerpiece. Distinguished by its stately columns and traditional yellow-and-white exterior, the elegant Old Florida hotel boasts white rattan rocking chairs on the front porch, balustrade stairways, garden party-print wallpapers and miniature fireplaces—all reminiscent of the 1900s when guests like Henry Ford and Thomas Edison stayed at the inn. The property even has croquet lawns, where tournaments take place and guests play the game that began in 1868 England.

Because the island is only six blocks wide, you can’t get lost. Meander the tree-lined streets to The Inn Bakery on Railroad Avenue for coffee and doughnuts, then continue on to Park Avenue for Lilly Pulitzer fashions at The Palm On Park and stylish resort wear at J. McLaughlin. The kitschy down-to-earth Temptation Restaurant, called “The Temp” by locals who love it, often has a line out the door on weekends. If you pop in on the right evening, you’ll enjoy live music.

Exploring beyond Boca Grande with a drive down Gulf Boulevard to the southern end turns up two lighthouses. The Gasparilla Island Light, built in 1888 in Delaware, reconstructed in 1927 on Gasparilla and recently restored, can now be climbed. The lighthouse’s 105-foot exterior has a spiral staircase that takes you to the top platform for a 360-degree view of Gasparilla and its surroundings. History buffs find the Port Boca Grande Lighthouse & Museum, a house dwelling-style lighthouse, a great source for learning about the area’s past.

Every town has a famous street, and in Boca Grande it’s Banyan Street. This shady tunnel-like stretch of road, taken over by fig trees with hanging aerial roots that have the appearance of thick trunks, is a fascinating display of nature. Its magical allure makes it an ideal backdrop for weddings.

Nearby Boca Grande Pass is where the tarpon swim in large schools that can run a mile long. The area’s seasoned fishing guides are your best bet for hooking and watching a “Silver King” perform its gymnastic leaps. Snagging this huge fish, which can reach 8 feet long and weigh 280 pounds, is a bucket-list item. 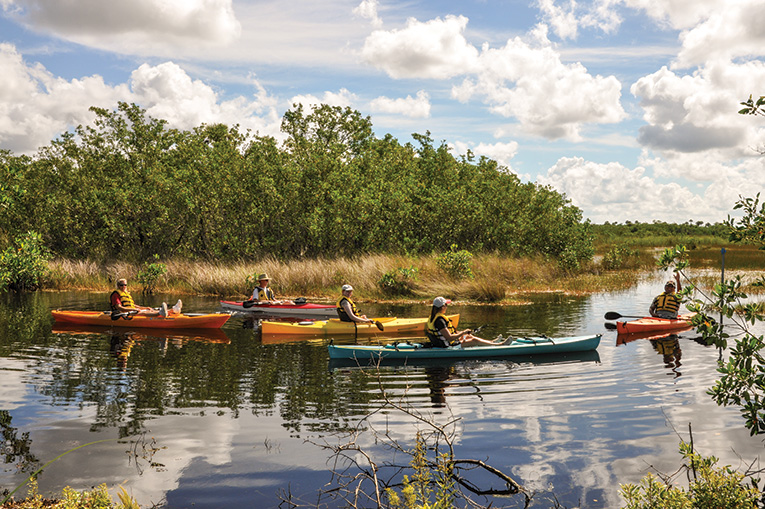 If you’re traveling the Gulf Coast of Florida, this may very well seem like the end of the line. Everglades City is pretty much the last stop before the vast wilderness of the Ten Thousand Islands National Wildlife Refuge. It’s a quiet pipsqueak town—all two miles by four blocks of it—nestled between the Collier River and the 580,000-acre Big Cypress National Preserve. Boats, canoes, kayaks and airboats all depart from the area’s marinas on day trips, overnight campouts and sightseeing adventures that take them into a maze of mangrove islands and narrow waterways.

In the 1920s, Everglades City played a strategic role during the construction of the Tamiami Trail (the road connecting Tampa to Miami), a time when businessman Barron Collier invested heavily in the town. An imposing white neoclassic city hall, built as a courthouse in 1928, stands proud in the town circle along with the historic Everglades Community Church.

Along the water’s edge, mangroves provide a green backdrop to moored boats, and no-frills seafood-centric restaurants—City Seafood and Camellia Street Grill—claim outdoor space on the river. Both eateries have order counters and pick-up windows, along with nautical décor, that complement the town’s laid-back sensibility.

For something more upscale, there’s the riverfront Everglades City Rod & Gun Club, which Collier ran as a private club and used to host dignitaries and U.S. presidents. The lobby’s heavily polished wood walls, ceiling and floors give it an old boys’ club feeling and create the ideal setting for displaying alligator skins and taxidermy mounts of panthers. A bar and billiards table, antique cash register and wall of newspaper clips documenting who’s-who visitors give it a museum quality. Poolside guests sip cocktails and munch on the slightly exotic offerings of gator and frog’s legs.

A causeway connects the town to Chokoloskee Island—basically a huge shell mound. For a few bucks you can visit the Smallwood Store and its museum. This dusty relic is filled with an eclectic mix of household items, clothing and Miccosukee Indian dolls from yesteryear. If you’re fascinated by the area’s history, watch The Everglades Outlaw video that plays continuously. Pioneer Totch Brown tells tales of life in the mosquito-infested swamp, from gator-hunting and turtle-fishing to moonshine-making and smuggling. 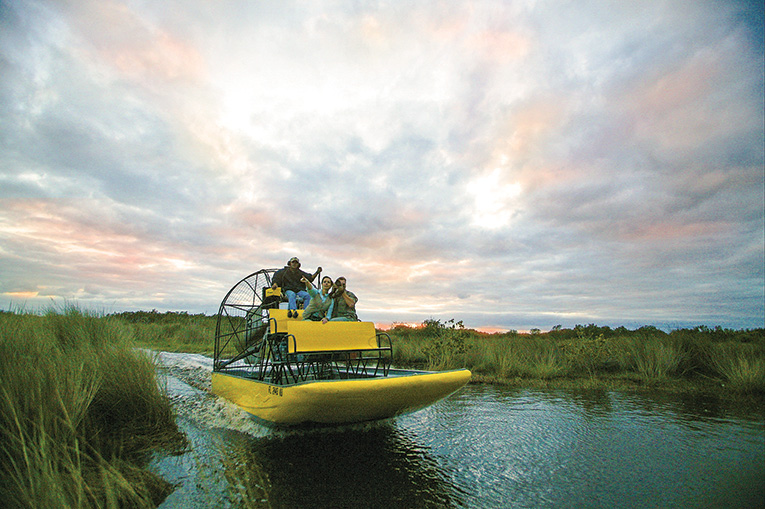 Climb 180 steps to the top of an 80-foot wooden tower for a panoramic view of the Ten Thousand Islands and Everglades National Park. Time your visit to the sunset hour when the evening’s golden light illuminates the island landscape. The Everglades Observation Tower is adjacent to an elevated boardwalk nature trail.

The only time of the year when this sleepy outpost is booming with visitors is during the Everglades Seafood Festival (held in February). Foodies, fishermen and families come to sample Gulf shrimp, stone crab claws, gator, fish and seafood paella. Live music, carnival rides, and arts and crafts booths round out the event.