For 17 years, the Epcot International Food & Wine Festival has wowed millions on a colossal scale. Here’s how Disney pulls it off.

Joseph Hayes,
While Taste of Chicago, with more than 2 million visitors in five days, claims to be the largest food fest in the country, the 46-day whirlwind of culinary activity called the Epcot International Food & Wine Festival is definitely the longest, with a veritable army of behind-the-scenes cooks, carpenters, horticulturalists and stylists creating a walking and eating tour of the world. At the first festival 17 years ago, when Disney’s experimental theme park was called Epcot ’95, chefs prepared the food in makeshift tents and many visitors were unaware that there was even a special event going on. The 1996 fest introduced the more substantial International Marketplace booths, inviting guests to “nibble your way around the world.” Guest chefs Todd English, Susan Spicer and a very young-looking Norman Van Aken appeared in 1997.
This year’s event, running Sept. 28 to Nov. 12, is called Taste Your Way Around the World. It features 81 guest chefs giving demonstrations, cooking breakfast, lunch and dinner, and helping 150 Disney cooks and chefs feed an estimated 1 million-plus visitors. Celebrity chefs Jamie Deen, Cat Cora, Art Smith, Bryan Voltaggio and Robert Irvine supply the celebrity sheen, while local chefs Andrea Zelen (Le Cordon Bleu College) and the delightful Hollis Wilder (Sweet! By Good Golly Miss Holly) will make appearances.
Epcot executive chef Jens Dahlmann is the steering hand behind every recipe in every booth. Dahlmann was a photographer before becoming a chef, and his stylist’s eye shows in every dish. “Make it sexy,” he says. “Make it tasty; involve all your senses. Tell me a story.” Someone on the Epcot staff thought suggesting a food truck theme would be hip, but Dahlmann was already beyond the trend. “What is a food truck but ethnic comfort food with a twist? I’m already doing serious food in food trucks; we just don’t have wheels.”
He’s also doing some serious planning, mapping out the following year’s festival before the current one even gets under way. “I know by the end of the festival what to do next year,” Dahlmann says. “By closing day, I’m halfway through the ‘what’s next’ list.” 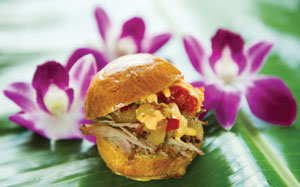 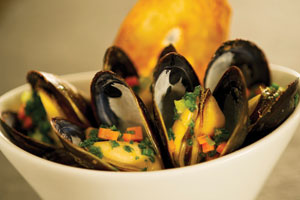 And so each year, after scant few weeks of rest, feedback from Disney staff and guest responses are reviewed in December to reveal successes and problems. By January, concepts for new dishes and planning for the entire fest are already in place, and the risky job of ordering ingredients nine months before they’re needed begins. In March, recipes are developed and photographs taken for the cookbook (a recipe book is sold at each festival). Gregg Hannon, Epcot chef de cuisine, is testing and tasting new recipes in May, determining plate sizes and tweaking ingredients. Thousands of “cast members” begin training and scheduling in the summer, and construction starts on the often elaborate marketplace booths. Culinary program manager Marianne Hunnel (her husband, Scott, is chef de cuisine at Disney’s Victoria & Albert’s) nails down every guest chef, sommelier, author, sponsor, and Disney chef involved in the festival in July, with hopes that they’ll still be available come October.
In August, the phones open for reservations for parties, seminars and special events (last year 700 people were already on hold when lines opened at 7 a.m.). September starts a vast equipment load-in that rivals a giant stadium rock tour. Menus are printed and, as festival operations manager Michael Jenner says, there’s “lots and lots of walking, making sure each marketplace will actually stand up to the intense usage.”
The numbers are impressive: One dish, a white corn arepa with local pork in the new Florida Marketplace, is expected to sell 35,000 to 40,000 plates; last year the Hawaii booth went through more than 60,000 pork sliders in 45 days. A popular fisherman’s pie in the Ireland booth will use up to 5,000 pounds of lobster. Thirsty samplers will go through 33,000 bottles of wine and champagne, 300,000 wine servings and 360,000 beer servings, and end on a sweet note by devouring 100,000 desserts.
The bustling production kitchen behind the World ShowPlace Events Pavilion has 150 cooks working continuously to supply three zone kitchens at Germany, France and Norway, that in turn feed the 29 international kiosks. And that’s not counting the chefs and food involved in more than 500 events outside the strollable Marketplace, from very popular mixology seminars to the extravagant Party of the Senses. Each of the five party dinners goes through as many as 10,000 plates and glasses in its quest for culinary overstimulation.
The kiosks go through several stages of design, and then they are decorated, with horticulturalists planting numerous herbs and vegetables reflecting each booth—pots of sage in France, peppers in Mexico—and adding tiny unheralded festival booths to the miniature Epcot Garden Railway display in the Germany pavilion, a visitor favorite spot that was created for the first festival. Meanwhile, Dahlmann is still running more than 20 Epcot restaurants before, during and after the fest.
The tasting-sized dishes range from $3 to $8, while general admission to Party for the Senses is $145. It would take a superhuman appetite and about $1,500 to explore every tasting opportunity-including Sweet Sundays breakfast, one dish and glass of wine at each marketplace, a chef-led tasting tour, Kitchen Memories lunch, wine school, cheese seminar, mixology and culinary demos, and Disney Dessert Discovery events. Too bad that, unlike the wizards who put on this event, you can’t be in several places at once.
EPCOT FOOD & WINE FESTIVAL
Sept. 28-Nov. 12
disneyworld.disney.go.com/special-events
This article appears in the October 2012 issue of Orlando Magazine.
Categories: Dining