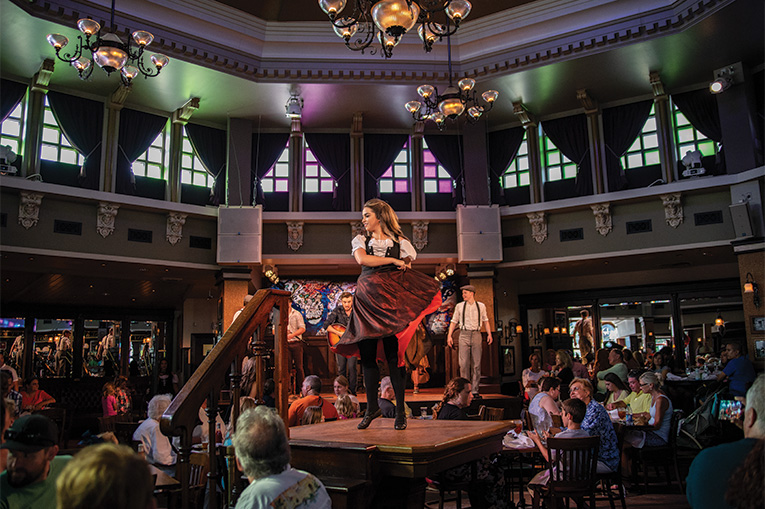 Raglan Road at Disney Springs has become, at almost 15 years of age, the standard by which other Irish restaurant/pubs are judged. A series of faithfully restored mahogany and marble bars, wood-paneled walls and furnishings from ancient Old Country pubs, it is noisy and boisterous with a grand 150-year-old stage showcasing dancers, singers and musicians from Ireland. Between and below the sounds of tap shoes and lilting lyrics are great ales, many locally brewed and exclusive to Raglan, and the talents of executive chef and freshly minted Orlando resident Mark O’Neill. As only the second chef to run Raglan’s kitchen, he brings new insights into this version of cuisine from the Emerald Isle.

“Gastropub,” he says. “That was always the route I wanted to go down in my career. It takes a lot of skill and technique to make these dishes, but simple at the same time.” He’s a humble man, preferring to let his food do the talking, and what he points to as representing his persona is the Let There Be No Rush Pork ($25). “It’s a 24-hour process to get braised pork shoulder on the plate,” explains O’Neill, who serves the dish with caramelized apple puree, house-pickled mustard seeds and creamed cabbage with sage. He sources a heritage breed of pork from North Carolina. “Once you’ve got good product, you don’t need to mess with it.”

Raglan Road won our Best Restaurant slot in the 2014 Dining Awards, and with good reason. At the time, the energetically sly celebrity Irish chef Kevin Dundon was the public face of the enterprise, emerging from his stately home/luxury hotel/restaurant/cooking school, Dunbrody House in Wexford, Ireland, to conduct special event dinners at the Disney Springs establishment several times a year.

But Dundon left the Raglan business in December of 2017, a decision prompted by his increasing commitments at home and exacerbated by a health scare after surgery that convinced him to cut down on traveling to the U.S. His voice still echoes on parts of the menu, but Chef Mark is in full control, and in many ways brings to the dishes a contemporary yet traditional taste of Dublin. 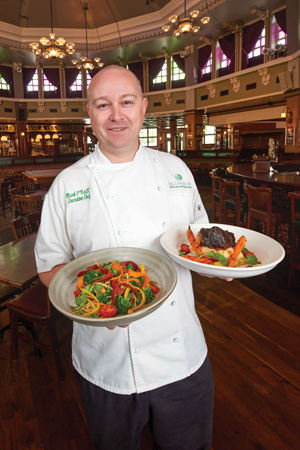 Irish cuisine is known for fish, and O’Neill’s dish called Foleys Finest Trout ($28) presents North Atlantic sea trout from Foley Fish in Boston, pan seared with a crisp skin and spooned with a tart caper dressing. “In America it’s called Arctic char,” he says. “We call it sea trout. It’s a light fish, quite elegant.” It’s served with pillows of dill gnocchi, zucchini ribbons, cherry tomatoes and samphire, a salty marine succulent that was actually mentioned in King Lear. Lear would have enjoyed the dish, and perhaps the dancing, too.

Like other standard-sounding menu items (colcannon potatoes, bangers and mash), the Shepherd’s to Die for Pie ($20) may seem familiar. But it’s not. Combining 12-hour braised beef and pulled lamb in a red wine reduction and topping it with butter-saturated mashed potatoes smoked with Irish peat makes for a rich, deeply flavored dish you won’t have encountered before.

And of note is the OMG Burger ($20), Irish from start to finish with a stack of dry-aged ground prime burger, Irish bacon, Dubliner cheddar and opulent Jameson Irish whiskey BBQ sauce, crested with crispy potato straws. The restaurant is justly proud of it. There is also a Boaring Burger ($20) that’s a study in textures and tastes: savory grilled wild boar, tangy blue cheese from Cashel in Tipperary, the pepper taste of arugula, and full-bodied port and pear chutney.

“My father was a chef, once upon a time, before my time,” O’Neill says. “He always had an interest in cooking and passed that on to us.” The younger O’Neill has cooked in Dublin’s Four Seasons Hotel, Brasserie Sixty6 and the Michelin star Thornton’s; London; Germany; and Australia. He uses all those influences to inform his cooking.

“That’s what’s makes a chef,” he says. “Taking knowledge from wherever you are cooking.”

Raglan is owned by partners Paul Nolan and John Cooke, who also opened the Nine Fine Irishmen pub at the New York-New York Hotel in Las Vegas and have a keen eye on the authenticity of the operation. There’s no greater indication of this than the fish and chips ($22) a massive serving of beer-battered cod and steak-cut fries that match any found at the Irish seaside.

A bronze of the legendary Irish poet Patrick Kavanagh, who penned the poem “Raglan Road,” still sits on a bench outside the pub. He once wrote about “the wink-and-elbow language of delight.” Which, in Raglan Road’s food- and music-filled hullabaloo, to use a fine Celtic word, is sometimes all the conversation that is needed.

We’re told that Raglan Road is the top seller of Guinness in the U.S., and a fine head is pulled by the talented tenders at the bar. Of special note are the seven signature draughts made especially for RR, and a flight of four from breweries in Tampa, Orlando, Plant City and Winter Garden is a great way to sample.