FOOD: How the Milk District’s MX Taco Is Keeping It Real

Ryan Manning is dedicated to tradition, with combinations of everything from braised beef and avocado to sweet potatoes and mushrooms. 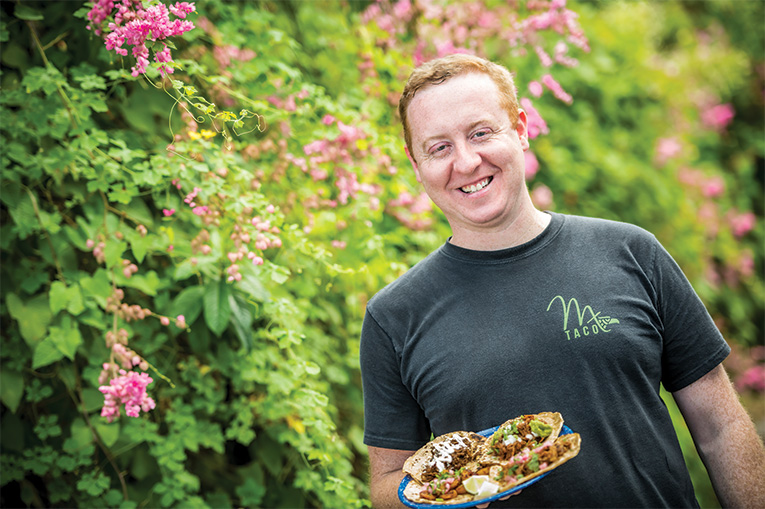 Ryan Manning’s tacos are a dazzling journey of flavors through various regions of Mexico. (ROBERTO GONZALEZ)

Add to that list Ryan Manning. MX Taco, his little shop tucked in the rapidly changing Milk District, is alive with extraordinary flavors from a tight, carefully fashioned menu.

Orlando restaurants from expensive steak houses to poke places and food trucks have tacos on the menu. Tortillas stuffed with Korean BBQ, Indian butter chicken, Chinese pork belly and Vietnamese crispy tofu can easily be found. Flour and corn tortillas are a quick and hip delivery system of which varying quality can be readily sourced, and a few spoons of filling go a long way.

There’s nothing wrong with enjoying this idea of Mexican or pseudo-Mexican or not Mexican at all. It’s rare to have experienced the remarkable cuisine from our southern neighbor without the filter of Texas, or California, or corporations.

But there’s the other view, the reverent view, the craft view. 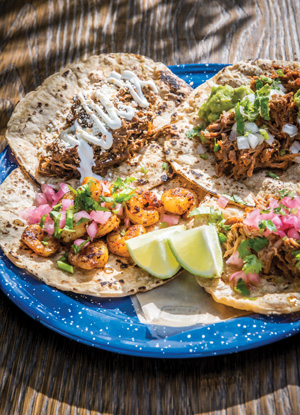 Gazing at the map inside MX Taco’s menu, one can see the Puebla source of mole poblana chicken, topped with crumbly queso cotija and a deep, dark, thick sauce that demands intense attention to the flavor. Camaron tikin-xic, from Yucatan, is based on a centuries-old Mayan dish, marinating petite sweet shrimp in a blend of annatto, bitter orange, cloves, cinnamon, cumin and clove. Experience this complex flavor combination; it’s something special.

Manning has worked at Disney’s Flying Fish Café and Highball & Harvest, and spent years helming the kitchen at the Ritz-Carlton in Cancun.  He became inspired by the diversity of Mexican dishes that, even now, are foreign to U.S. palates. “When I first started working at the Ritz-Carlton,” he says, “I thought I understood the cuisine. It turned out I knew absolutely nothing.” How things change.

I ran into a Milk District legend, Pom Moongauklang of Pom Pom’s Teahouse & Sandwicheria, who was lunching on Manning’s creations. “Ryan’s got so much creativity,” she says. “I’m having steak tacos, just delicious—what’s not to like?” The steak in question, bistec con sikil pak, is a take on a Mayan spread from Yucatan, toasted pepitas ground with garlic, cilantro, jalepeño and lime, a smoky, nutty flavor that combines with pickled onions to lift the charred meat. Chilorio, from the northwest coast, is a peppery, tangy braised beef, layered on the tortilla with avocado crema and Manning’s pepper sauce. Manning sources fresh peppers from Apopka, and everything is made in-house, except for the tortillas, which he gets from a Mexican-owned manufacturer in Atlanta. “They’re making tortillas better than I could possibly do it,” he says.

Quesadillas from Mexico City, sweet potatoes and mushrooms cloaked in mole from Oaxaca, and pulled pork from Michoacán round out the menu. Tacos al pastor made on a vertical rotisserie arrives Saturday afternoons, and comforting chicken, pork and hominy pozole soup is served on Thursdays, as is tradition.

Signs of detailed design—the artistic menu, the use of black and green that accents uniforms and décor—show an eye toward branding and expansion. A second, much larger location has opened in Waterford Lakes, with another scheduled next year in Kissimmee and plans for an offshoot in Costa Rica.

Manning says his dishes are “not my interpretation of the food, changed for American flavor profiles, but the taste of the regions they came from.” He calls it comfort food; I call it a thrilling discovery of new lands.