Food & Drink: Worth the Wait

Delaney’s Tavern brightens up the neighborhood with creative American fare from Chef Anthony Albino, as well as a friendly bar. 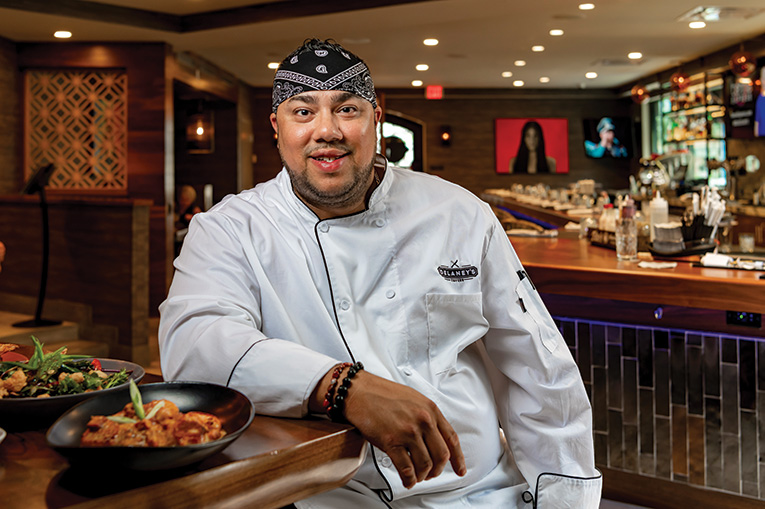 Chef Anthony Albino is at the culinary helm of Delaney’s Tavern, south of downtown. (ROBERTO GONZALEZ)

The history of Delaney’s Tavern, and the 54-room Delaney Hotel that surrounds it, is long in the telling. What started as group of medical offices built in the 1960s—it’s across the street from Orlando Health, after all—became a series of restaurants (Doc’s Streetside Grille among others). A redevelopment was announced in late 2015 and now, hotel and restaurant are finally open. Both are a welcome addition to the neighborhood.

Delaney’s Tavern (named in homage to the nearby Delaney Park neighborhood) is a three-a-day-plus-brunch eatery. Chef Anthony Albino crafts what they call a New American menu. Albino grew up in Orlando after a childhood in New Hampshire, and after a time at Bubba Gump Shrimp Co., spent six years as executive chef at Santiago’s Bodega.

Hotel President Greg Allowe (whose hand is in the design of the building, the hotel and the restaurant) says, “The goal is to be a neighborhood tavern, not a hotel restaurant. I live in Delaney Park; there’s not many places to eat.”

Allowe’s self-interest has resulted in an upscale affair, with some interesting permutations on that “American” idea. It lives up to the tavern name, offering sandwiches, soups, beef and seafood—only far above what a roadside inn might offer. “Tavern-esque,” as Chef Albino says. “I didn’t want it to be a slab of steak. I use all the expected players [beef, fish, etc.], but the sides are different.’’

The house-cured corned beef, for example, spends up to 10 days in brine, then is roasted in beer. The red cabbage slaw that accompanies the sandwich is braised in the remaining cooking liquid.

Lunch and dinner are the same menu. Sometimes I like that, sometimes I’d rather have discreet meals. I’m okay with it here, if only because I’d hate to miss the blue crab beignets ($13), a small-plate offering that takes the doughy puffy New Orleans breakfast staple and brings it into the savory column. A crisp outer shell reveals a mouth-filling portion of crab, bedded on an apple fennel slaw that absorbs the heat and releases a contrasting bright taste and vibrant aroma. “That’s my wife’s favorite,” Albino says about this dish. “The crab’s not going anywhere.”

Crispy rock shrimp salad combines greens with a crunch of toasted pepita seeds, the rich taste of fire-roasted peppers and onions offset by a tart and spicy dressing of sweet Thai chili. For the diver scallop, shrimp and grits ($22), bite-sized discs of scallops are seared perfectly tender (the shrimp, not quite as successful), juxtaposed in color and texture by Congaree and Penn purple grits from Jacksonville, folded with parmesan cheese. Accents of salty Tasso ham from Louisiana and a creamy sundried tomato sauce highlight and unite the flavors. Pasta, like squid ink tonnarelli, a sturdy noodle from Lazio, Italy, and a classic Florentine pear and ricotta fiocchetti (beggars’ purse), are from local Trevi Pasta. 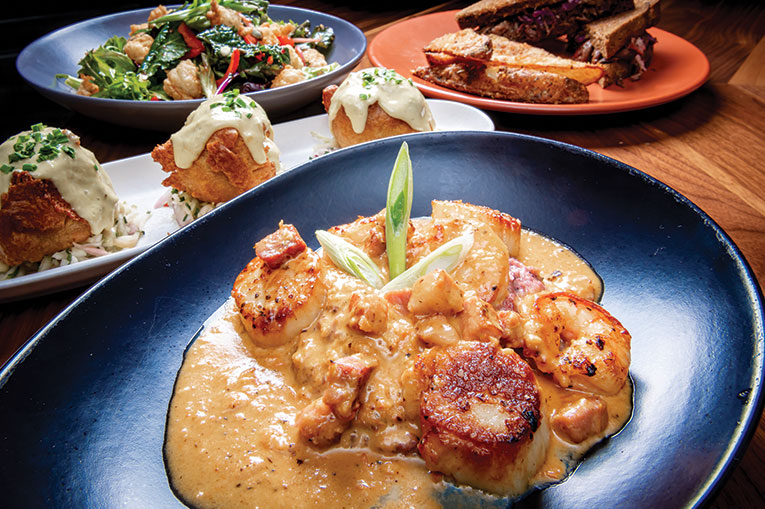 Breakfast (and it is quite welcome in the pre-lunch desert of Orange Avenue) is a compact catalog of standards: eggs of the omelet, French toast and scrambled varieties; charred kale and potato skillet with short ribs ($12), and chicken and cheese tostadas describe most of the options. Plus, the “Swine Frittata,” an umami avalanche of chorizo, bacon, ham, roasted mushrooms and smoked gouda cheese. Sunday brunch is based on a different theme each week, with buffet and carving stations.

After three years of actual construction, the spry six-month-old property is still young, but there’s already a feel of established, local favorite. The Tavern is a long, thin room (“We had to fit it in the building,” Allowe says) that runs the length of the space, the always-hopping bar at one end and private dining at the other. The main space sits amidships, and without a giant box-shaped space and dozens of tables behind you, there’s a feeling of privacy at each table. Service is what Allowe describes as “high-end, technically correct but friendly.” Bar manager Brett Counts, also from Santiago’s (Albino says he brought a lot of his old crew with him), creates interesting cocktails, like the Carmen Miranda, made with Brazilian Cachaca 51, banana liqueur and coconut milk.

A music series is in the works to use the outside courtyard for live music and small bites. Free parking is available in the garage behind the hotel.

When asked about which menu item most reveals his personality, Chef Albino has a simple answer:

“All of them. Those recipes are mine.” 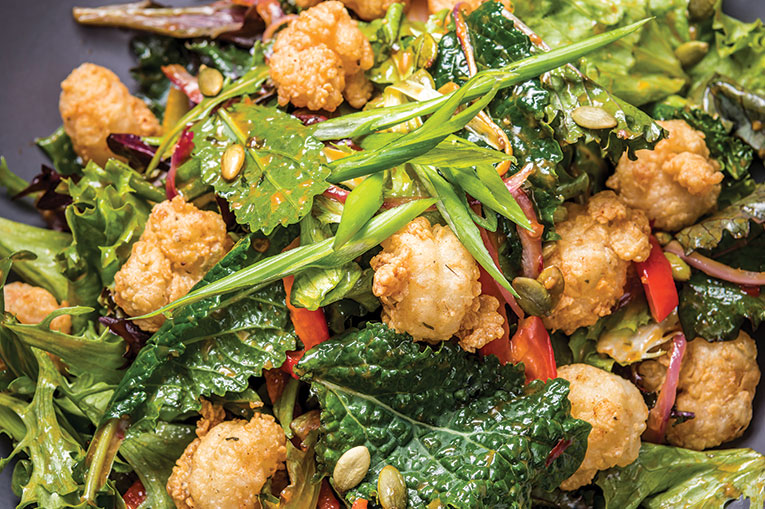 Greg Allowe says the success of this project means more Delaneys and related hotel/restaurant combos are in the works, with Delaney’s Winter Park in the offing and an as-yet-unnamed hotel with two restaurants headed for downtown Orlando. “We’re looking to do more in the area,” he says. Here’s hoping the new business takes less time.