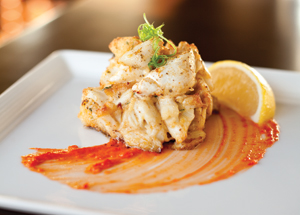 One hopes that the great parade of in-house restaurants like The Boheme, Primo and bluezoo puts to rest the idea that hotels and fine dining aren’t a good match. The Disney-adjacent territory of Bonnet Creek is a culinary hotspot, with La Luce at the Hilton and Bull & Bear at the Waldorf. Sharing that energy is the lowercase deep blu at the Wyndham Grand Orlando Resort, with Chef Cory York enticing the taste buds. York is a culinary sponge, combining aspects of his Southern, Pacific Rim and Continental experiences in dishes like seafood cioppino, lobster miso soup and tiger shrimp spätzle. A recent trip to Spain means visions of tapas and Serrano ham dance in his head and will most likely steer the menu in new directions. His influences show on the plate, and his sophisticated yet playful outlook is stamped on every aspect of the restaurant. When a server proclaims that the “blu” crab mac n’ cheese is his favorite dish, he really means it. And the amazingly calm kitchen that can be observed from the newly established chef’s table is a direct reflection of the chef’s demeanor. York deserves to be our newest celebrity.
14651 Chelonia Parkway, Orlando, 407-390-2422, deepbluorlando.com
Napa at The  Peabody 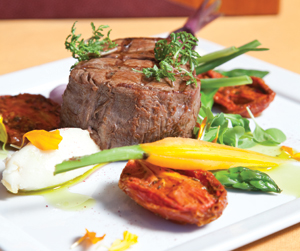 An International Drive hotel kitchen serving California-
inspired dishes using Florida ingredients, a chef confident in his skills and imagination, and a room that proclaims understated elegance while whispering of high-end delights. The walls and room dividers of Napa at The Peabody Orlando hotel consist of seemingly endless rows of wine bottles that glow purely from the potential goodness within—and really good lighting. Executive Chef Jared Gross creates a seasonally-inspired menu by taking full advantage of local organic and sustainable elements such as steaming Canaveral clams in Orlando Brewing red ale, and nestling chicken from Bear Wolf Ranch in Groveland on house-made pasta. Gross has been working in Peabody kitchens since 1997, coming into his own at the hotel’s Italian steakhouse, Capriccio Grill, and he has a flair for mingling flavors like spicy papaya and mustard with crab, or roasted plums with beef. At Napa, his hands-on approach means that the kitchen makes savory puddings, biscuits (damn fine biscuits), mozzarella and the occasional marshmallow from scratch. The wines wander rather farther afield, with acres of West Coast wines augmented by selections from around the world, including several lovely South African vintages. This is International Drive, after all.
9801 International Drive, Orlando, 407-352-4000, peabodyorlando.com/dining
Maxine’s on Shine 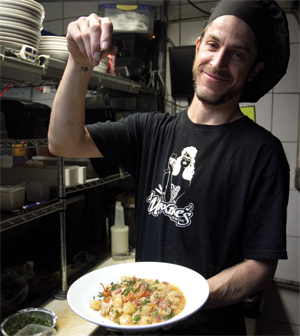 Sometimes it takes placing the right chef in the right kitchen to create a magical combination. My introduction to Bret Ashman was at The Social Chameleon, a tiny slip of a restaurant in the Milk District, where he manned the one-person kitchen and turned out interesting hummus and pizza variations. He later opened a drinking establishment called The Milk Bar and the snack-and-sandwich Spooky’s Black Cat Café. But there was always the promise of greater things, finally realized in the wonderfully situated Maxine’s. There, owners Kirt Earhart and Shelly Broadwell have created a neighborhood spot serving elegantly eclectic meals in a relaxed atmosphere, the true definition of a bistro. Live music, a knockout Sunday brunch, outdoor seating in a pleasant residential neighborhood—I won’t even hold the karaoke against them. But the draw for me, of course, is the food. Ashman turns out firm fish, curried chicken, unique twists on Italian, Indian and Asian dishes and inventive starters (calamari in roasted red pepper sauce should be on everyone’s menu) that rise above anything he’s done before. It’s a pleasure to see the results of a chef finding his kitchen.
337 N. Shine Ave., Orlando, 407-674-6841, maxinesonshine.com
The Rusty Spoon 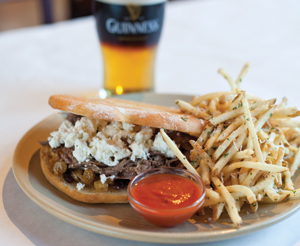 Considering that some of the finest chefs in the world are women (not to mention Mom), the scarcity of female chefs in Orlando kitchens is still notable: There are Loren Falsone, Dee Foundoukis, Julie Petrakis, Pom Moongauklang—if I’m missing two more that would be a lot. I continue to sing their praises, not because they are women, but because they are superbly talented chefs. High among the ranks of these great Orlando chefs is Kathleen Blake. The Iowa native has cooked in San Francisco, Texas, Washington, D.C., and at Melissa Kelly’s Primo in Orlando, and we’re lucky to have her residing at The Rusty Spoon. Peer through the doorway of the semi-open kitchen and you’ll find Blake in a constant dance, creating and overseeing an imaginative contemporary American menu that makes great use of our local organic bounty. Blake’s re-imaginings of lasagna, stuffed eggs, fish and chips—even doughnuts—show a flair for flavor combinations and an unwillingness to settle for the ordinary. At a recent multi-chef charity dinner, Blake was consigned to making dessert, something she normally avoids, and came up with a concoction of chocolate, meringue and bourbon-soaked cherries that had the already over-stuffed diners moaning and licking the bowl. She’s that kind of cook.
55 W. Church St., Orlando, 407-401-8811, therustyspoon.com
Sushi Pop 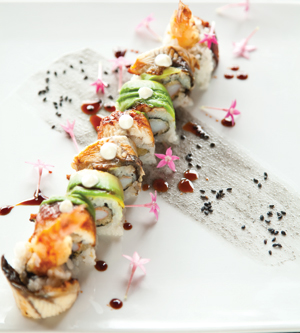 The quirky nature of Sushi Pop—obscure Oviedo location, brightly colored Japanese anime styling, themed and costumed evenings—is the lure; the hook is the remarkable food. When I first reviewed the restaurant back in April, I was so focused on sampling as much of the superb menu as I could that some of the finer details escaped me. But a recent casual revisit (it was steam punk night) allowed for lingering and a real appreciation of genius. Co-owner Chau is a most unusual sushi-ya (chef), using traditional methods as a starting point for creations that define the word unique. His distinctive rice uses two different Japanese vinegars, first-harvest Japanese seaweed and Yamada Nishiki Gold rice (normally used to make very high-end sake). The fish itself is of the highest quality, and in most places that’s enough, but Chau and company play with our expectations by way of tiny embellishments—a drop of hot chili sambal on torch-seared tuna; ginger and shallot salsa kissing buttery salmon belly; savory lemon and basil jam on a perfectly sliced scallop. Like the staff, the food plays dress-up, and it all adds up to fun and outstanding fare.
310 W. Mitchell Hammock Road, Oviedo, 407-542-5975, sushipoprestaurant.com
This article appears in the November 2012 issue of Orlando Magazine.
Categories: Reviews