At Wasabi in Florida Mall, the meal is on the move atop conveyor belts. So bring the kids and grab some fun.

Sometimes, you go to a restaurant for the food; sometimes, it’s the experience. Put Wasabi in the latter category, lace up your mall-walking shoes, and bring the kids. 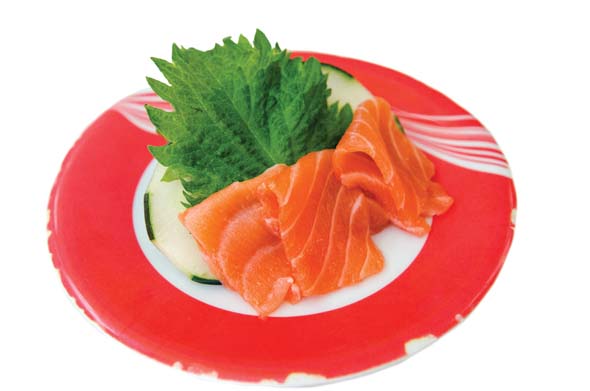 Wasabi (not to be confused with Wasabi in Avalon Park, or Wazzabi in Winter Park) is in the massive Florida Mall, outside the Florida Hotel (you know a mall is big when it has its own hotel) and across the aisle from Saks. With no walls, a long counter surrounding the open kitchen, blue and red booths and tree-like plastic overhangs, it resembles a multi-colored Seussian commissary or a really large food court booth. The reason to go is like telling a good joke: It’s all in the delivery.

When I was a kid, I used to go to a hamburger place that had a model train track running along the counter. I adored sitting on the revolving barstool, spinning and waiting for my cheeseburger to arrive, the hooting engine chugging along until my plate stopped, magically, right in front of me atop a flat car.

Wasabi is like that, in a most Japanese way. Not quite a self-serve restaurant, not exactly full service, orders for drinks and hot dishes are taken by very friendly servers, but the sushi passes by on a restaurant-long conveyor belt that winds from the kitchen within reach of every booth and seat. Dishes are color-coded to indicate price from $2.50 to $5 a plate, with other special-order items such as cooked chicken and salmon entrees rising to $10.

Frankly, if you’re a fan of supermarket sushi, you’ll be very comfortable at Wasabi. The food isn’t on a par with some of our great (and expensive) Japanese restaurants, but it is fresh (the electronically tracked plates let the cooking staff know when to replace the food), fast, colorful and somehow charming. The Red Dragon roll ($5) of spicy tuna, cucumber and fish roe wrapped in tuna has enough kick to stand out, as does the Baja ($4) of tuna, jalapeno and avocado. The Rainbow roll ($4) has a creamy and crunchy consistency, wrapping a center of cucumber and avocado with fatty salmon, tuna and flounder. I liked the citrusy grilled salmon “anticucho” filet ($10); I’ve never liked sushi with cream cheese and the smoked salmon roll ($3.50) confirmed my opinion.

In Japan the concept is called kaiten-zushi, a quirky fast-food invention of the 1950s that is very popular in big-city locations. It will remind the TV lovers in your crowd of the chocolate factory scene in I Love Lucy; I did see several plates escape the clutches of eager children and tumble into fortunately empty booths.

And that might be the real value of Wasabi. I know many children of friends and family who insist on eating only chicken nuggets or hamburgers, who might get introduced to fish and rice if it arrives on a robotic platform.

You’ll be in, fed and hanging out at the Apple Store before you know it.

This article appears in the April 2013 issue of Orlando Magazine.
Categories: Reviews