El Inka Grill draws on Asian and European influences for a culinary lineup that spotlights fish, ceviche and potatoes.

Last year, the National Restaurant Association pegged Peruvian cuisine as the hot trend. In fact, the food of Peru has become so popular that the food scenes in Chicago and Los Angeles are abuzz with potatoes and ceviche from Lima, with the New York Post calling Peru the “next food craze.” With cuisine shaped by the country’s history of multiple waves of Asian and European immigration, modern Peruvian restaurants are returning to their roots, with hotspots in China and Japan, along with fervent diners right here in Orlando. The burgeoning Marketplace at Dr. Phillips, not to be confused with the self-described Restaurant Row nearby, seems to be overflowing with international cuisine, and Peruvian restaurant El Inka Grill is high among them. 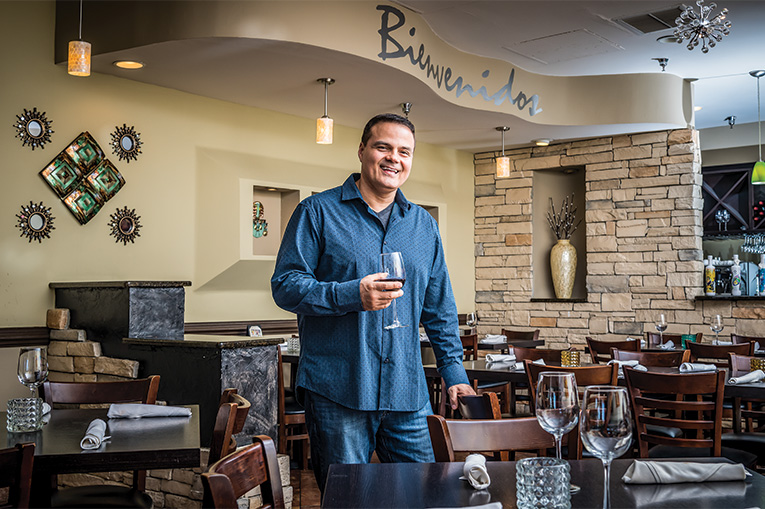 Generations of laborers from Japan (what is called nikkei in Peru), China (chaufa), Italy and Latin America arrived in waves during the 18th and 19th centuries, looking for gold and a New World fortune, and each one brought their food with them, which the kitchens of their new home embraced. This is not “fusion” cuisine, one tradition laid upon another, but an organic part of the culture. Peruvians dine on Italian gnocchi made with yellow papa amarilla potatoes, and Japanese pancayaki octopus rolls topped with crisp potato shavings.

And of course, raw fish, so omnipresent in Peruvian culture that there are almost as many variations as there are potatoes (almost). Some gastrohistorians say that the influx of Japanese laborers brought the idea of eating raw and marinated fish with them. El Inka’s proliferation includes tiraditos, a regional adaptation of crudo, slices of raw fish marinated in citrus, then dressed in sauces made from deep red (tiraditos a la crema de rocoto) or bright yellow (a la crema de aji amarillo) peppers, or topped with a black olive cream sauce (a la crema de al olivo; $15 each). Ceviches ($14.95-$28) wear all manner of colorful frocks: white fish in red pepper sauce; salmon in citrus; grilled lobster marinated in intense aji amarillo peppers.

The food of Peru is only familiar if you have been exposed to it; expectations of South American fare like Brazilian steak, Argentinian chimichurri or Colombian arepas doesn’t prepare you for the marinated fish, the mountain of potatoes and the variety of tomatoes and peppers, both spicy and sweet, that were brought to Europe from this diverse country by Spanish conquistadors.

Causas are so ingrained in the Peruvian psyche that the word is used as slang for a close friend. As food, they’re a small column of pureed potato colored with yellow pepper and topped with a chopped chicken salad, shrimp or octopus. The sampler of all three ($14.95) is hearty enough to order with a pisco-based cocktail or a Cuzqueña lager and make a meal.

Choclo, the indigenous large-kerneled Incan field corn, has a chewy, starchy consistency. It shows up with fair regularity, from fried, crunchy cancha snacks to an ingredient in chupe de camaron (17.95), a national fish chowder with many regional variations. The beautiful creamy soup of shrimp is cooked in a colorful broth with rice, squash, potatoes (natch), and Spanish influences of poached egg and cream. El Inka’s version starts with an aromatic fish broth, adding oregano, cilantro, cumin, green peas, cubes of queso fresco, a rich and savory taste that has echoes of caraway and a healthy dash of hot pepper. There will be plenty to take home, and it might be even better the next day.

The Dr. Phillips El Inka is laid back and quietly attractive, with attentive service, live music Thursdays and Saturdays, and drink specials like the house-made chicha morada, a beverage made from purple Peruvian corn, agave nectar, cinnamon and lime juice that may be more than 5,000 years old.Restaurateur/Chef Ivan Colombier owns both El Inka locations. He was born and raised in Long Island, New York, to Peruvian parents, who kept the culinary traditions alive, and Colombier felt passionate enough about the food to study at Le Cordon Bleu in Orlando and open the original Hunter’s Creek restaurant in 2011. “My friends in the local Peruvian community will find us,” he says. “What I want to do is educate mainstream diners about this fascinating food.”

The tables of Peru are laden with unique flavors and double-take worthy combinations of foods and cultures. El Inka Grill, by offering those delights, is doing us all a barrier-breaking favor. 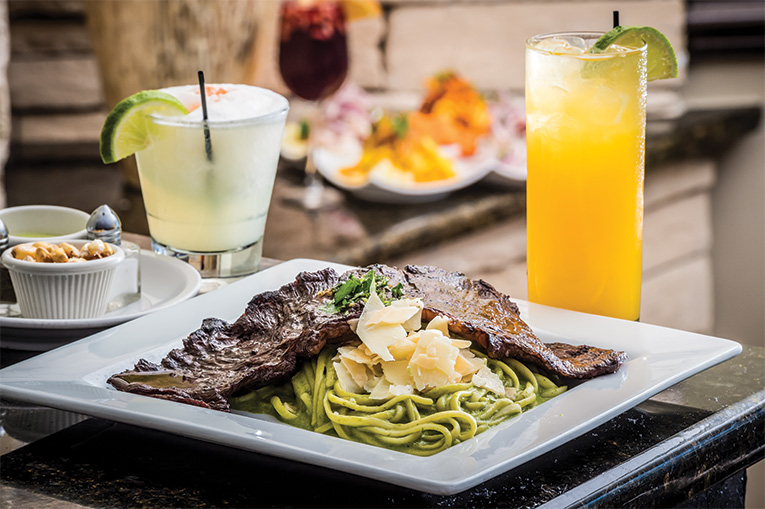 Peru has somewhere between 3,000 and 4,800 types of potatoes, some unique to one area or even one farm. The range of colors and shapes is astounding, from almost-black purple papa púrpura to white papa blanca; banana-shaped yellow qillu pasna tubers to puca shungo crimson globes with deep red hearts; perfect papa cóctel spheres to multi-layered llumchuy huaccachi shaped like pine cones.