Sometimes, even the slightest changes can create culinary magic.

On a visit to El Buda, the Latin-Asian fusion restaurant by celebrity chef Roberto Treviño, several menu items caught my eye, in particular Peking duck nachos ($14). The generous serving of roasted duck, marinated in hoisin sauce, drizzled in wasabi sour cream and piled high on a mound of rice vinegar-spiked Napa cabbage, was a very nice plate. The accompanying baked wonton skins were, on the other hand, so hard as to be inedible. A brief word and mere seconds later, the hard planks were replaced by a delectable deep-fried version, sturdy enough to hold the duck but light and airy-crunchy. The simple twist brought the dish from passable to genius. Which is where the rest of El Buda’s menu resides. 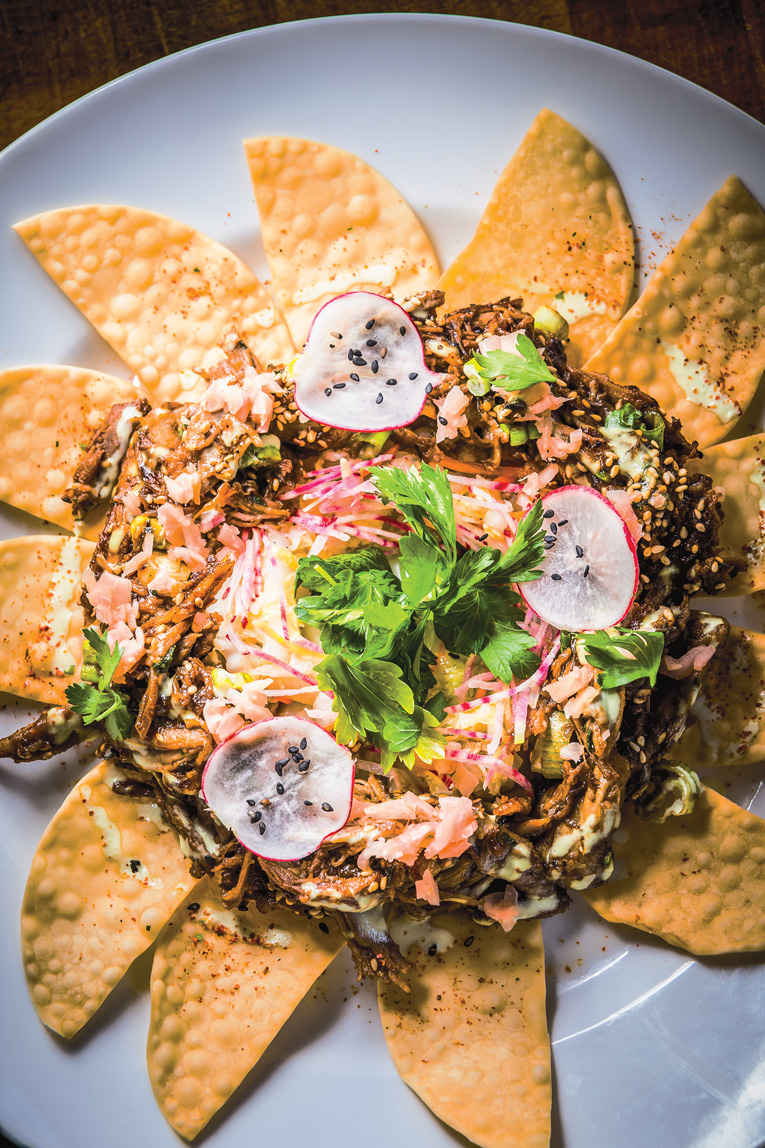 When I mentioned the nachos to Treviño, he said with a laugh, “Was that you? Our biggest fight with customers is those chips, fried or baked, so we go back and forth. On social media I’ve heard them both.”

Believe me, ask for the fried.

Treviño has referred to his melding of savory, deep, umami Latin influences and bright, acidy, crisp Asian notes as magique culinaire. El Buda’s master has competed on shows like The Next Food Network Star and The Next Iron Chef, along with his own shows in Puerto Rico. His Iron Chef America battle against Mario Batali featured a fried catfish fritter and a mole dessert.

“As a child,” he says, “I always wanted to be a bullfighter. But the kitchen adopted me. My dad made me go work in a kitchen; he thought I would hate it and go back to school. But I fell in love from day one. To get that level of discipline from my teachers, and that magic you can see happen on a plate, is something that reached me in a very basic way.”

The El Buda magic enthralls with scallion pancake quesadillas ($10), a Chinese restaurant staple folded around sautéed vegetables and cheese. “Growing up vegetarian, you get tired of hearing ‘we have a baked potato and a salad,’ ” Treviño says. “So this is my offering.” The flavorful Tuna Buda poke bowl ($18) stacks sushi tuna on red quinoa with avocado, wild hijiki seaweed and what Treviño calls “the salty sauce.”  He’s not afraid of flavors: “I mix that salty sauce with sweet and Asian fish sauce, and I call it the funky sweet and salty sauce.” Duck fried rice ($8) sounds simple, but with the addition of platanos maduros (sweet fried plantains) it becomes a lesson in flavor and texture contrasts.

After decades in San Juan, Treviño now lives in Orlando. “I had to say goodbye to Puerto Rico for now. There was no surviving that storm. We had already planned on setting up shop here, so we reached out our hands to our staff and brought them out. It allows the unit to become real, the whole dining experience becomes sacred. We’re feeding people. It’s deep.” 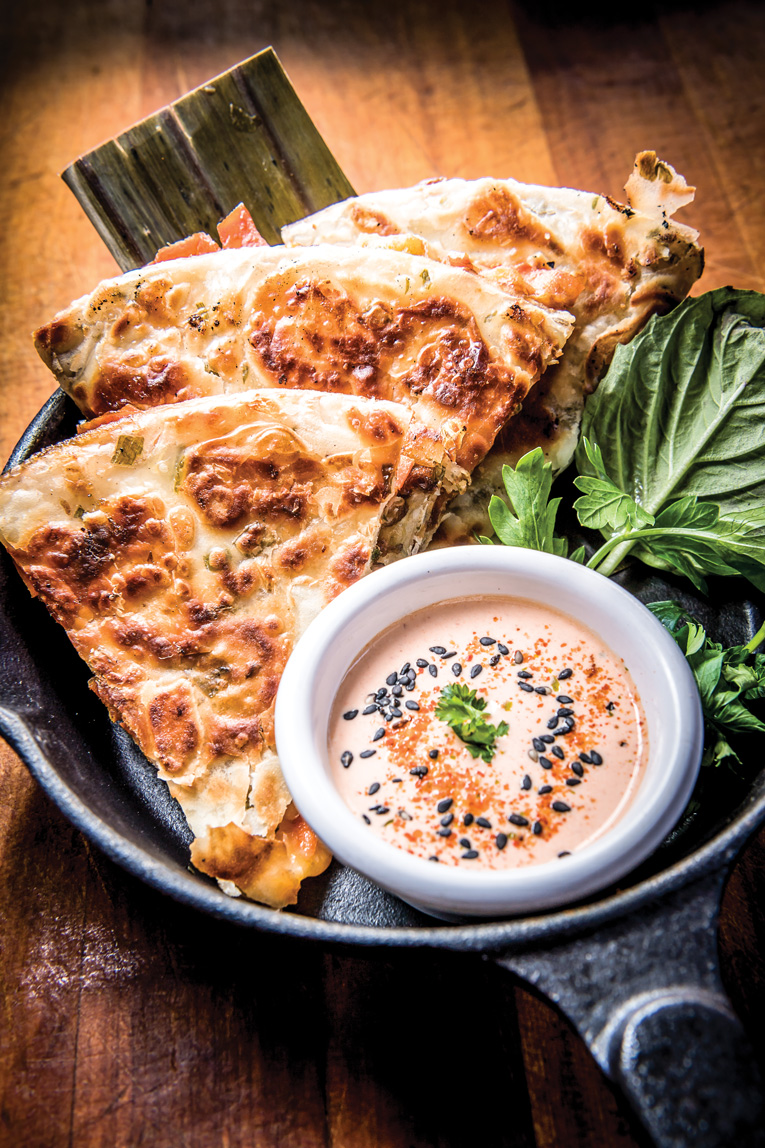 The scallion pancake quesadillas are filled with sautéed vegetables and cheese. (ROBERTO GONZALEZ)

The El Buda building on Gertrude’s Walk across from the SunRail station in downtown Orlando has been many things since it was The Rose Café in 1925: Eternal Tap, Absinthe Bistro, the almost unknown Bumby Elevator Company bar, the legendary Louis Chatham’s Louis’ Downtown, the first location of Brick and Fire, and the brief home of Maddy’s Craft & Cru. The space is lined with old brick and burnished metal, a bar highlighted in red accents and dark wood, and works by street artist Halsi and Puerto Rican painter Carlos Mercado. A stairway featuring the spire from Tampa’s original Arturo Fuente cigar factory leads to an atmospheric downstairs bar (A basement! In Orlando!) that El Buda uses as speakeasy and exhibit space.

Treviño has done his Orlando homework, citing references from The Ravenous Pig to King Bao to the Parramore farmers’ market. He talks about the Jack Kerouac House and throws in a quick quote from the author, then points across Church Street to The Rusty Spoon. Chef Kathleen Blake, he says, “is really why I thought we could come here and do good food and survive. It was Rusty Spoon that allowed me to think we could do it without having to go to Winter Park or a restaurant row. Downtown gives you all that urban feeling, that excitement of big city life.”

Treviño feels that Orlando is prime territory for a chef. “Orlando knows great chefs and great food, and for me to be part of that… we’ll do our thing, we’ll bring the nifty stuff, and then we’ll elevate it. That’s what makes it exciting. I’m just waiting in the wings. I want to make this place work—and then I want to open more restaurants.”

Roberto Treviño is justly proud of his pork and sweet plantain dumpling ($15 for 6). “That’s our signature dish,” he says. “You might want to buy stock in that dumpling. We grind the pork, we grind sweet plantains once they’re ripe, we let that mix in well overnight. And we make hundreds and hundreds and hundreds of dumplings a day, I’ve seen full racks of those dumplings go at a time. You say to yourself, ‘Will my career be judged on a dumpling?’ But why not?”