From superb French cuisine to creative craft cocktails (and a heavenly happy hour), the restaurant earns its place as a downtown gem.

A dovecote, so you know, was the Medieval version of a BMW in the driveway. A stone house for pigeons in Western Europe and Britain, its size and construction exhibited the wealth of the household: more birds equaled more meat for food, feathers for pillows, and an ample supply of fertilizer.

DoveCote, the downtown restaurant at the base of the 28-story Bank of America building, is an altogether different display, one of taste, craft and splendid food. 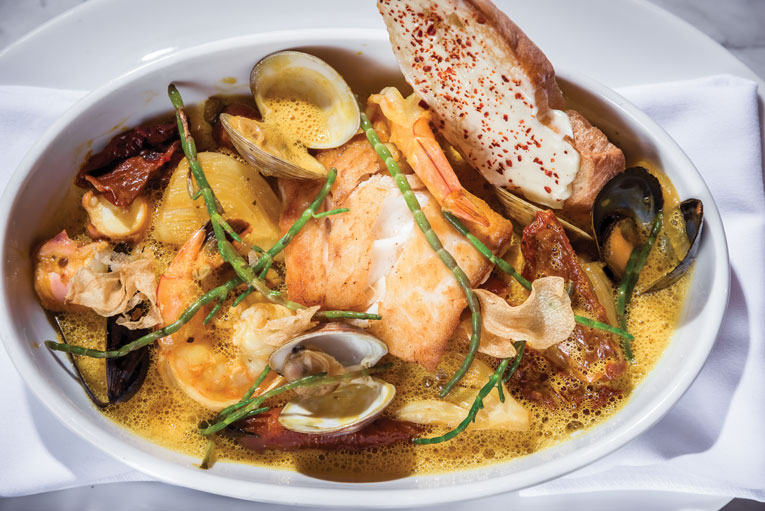 Zimmerman refers to the nearly two-year planning and construction process by saying, “Something like this can never be done really quickly if it’s done properly.” The room is eccentric and relaxing, with bird-coop style wine storage, assorted tables and banquets, and a gold leaf, Miro-like mural accenting the industrial windows. Seats spill into the marble-lined Bank of America lobby and out onto the sheltered patio at the front of the building.

DoveCote was originally designed as a co-venture between Zimmerman and James and Julie Petrakis, owners of the groundbreaking Ravenous Pig and Cask & Larder restaurants, but when the chance to open both a C&L at Orlando International Airport and a casual branching called The Polite Pig at Disney Springs occurred, James Petrakis decided to simply consult rather than operate DoveCote. Enter Miller, introduced to Zimmerman by local celeb chef Brandon McGlamery (who is himself opening a much-anticipated new restaurant in Maitland). 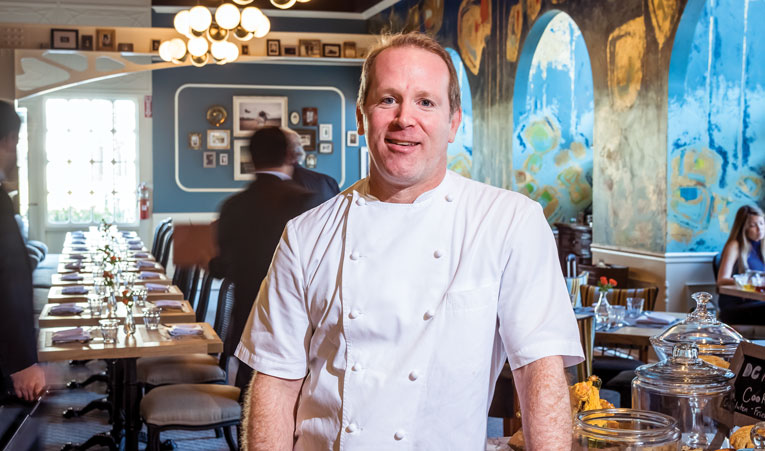 “I always just wanted to be a chef,” he says. “I don’t have that standard ‘I watched my mom cooking every day and that’s where I learned’ story.” Pittsburgh native Miller went to culinary school just outside of Philadelphia and hit the stovetop running. “I’ve never done anything else.” He left Orlando in 2008 for stints in Virginia, New York, Baltimore and Miami until family ties made him consider returning to Orlando.

When asked what item on the menu most reflects his style, Miller thinks and says “All of it. Some of these recipes I’ve been wanting to serve for 10 years. This is mine—it’s my ketchup, it’s my cocktail sauce.” He laughs and looks up to the white steel girders bracing the dining room, ornamented with family photographs. “It’s cocktail sauce for god’s sake!…but I execute it better than most.”

A very well executed chicken liver pate ($6) arrives in a white ceramic pot, covered in a layer of sea-salted fat and sinfully rich. A smattering of vinegary pepper relish adds a bright spot. Perfectly grilled octopus ($15) comes simply served with a tart dense foam Hollandaise and a tomato mirepoix cooked down to a caramel richness.

Both Miller and Zimmerman look at a broad definition of “French,” picking up Gallic influences from Madagascar to New Orleans. The rich chicken and sausage cassoulet ($18.50) melds dense cranberry beans with tender chicken confit, house-made pork sausage and crumbly boudin blanc into a salty, savory delight.

Sophisticated seasoning and depth of flavor is worth more than hot, spicy punch in Miller’s kitchen. The duck a l’Orange ($28) is one of the best dishes I’ve ever had, a meaty moulard duck breast with an almost rib eye texture, bathed in its jus scented with coriander and served with toothsome chunks of slow cooked eggplant and an eye-opening pureed polenta that I can only describe as a foam pudding.

So many things are going on with the Bouillabaise ($29)—Florida black grouper, clams, mussels, shrimp, crab salad, Pernod-saffron-shellfish broth—that it is easier to just say order it.

“I’m not trying to shock anyone with my food,” Miller says. “I just want a delicious restaurant, a mix of new and old … approachable French comfort food.”

The space was once home to the legendary Harvey’s Bistro, which closed in 2009 after 16 years as a high-powered meeting and dining spot. Subsequent eateries—several versions were called Terrace 390—failed to recapture the power lunch and after-trial libation crowd of lawyers from offices upstairs and the courthouse across the street. Now, the crowd at DoveCote ranges from suits and ties taking advantage of the outrageously long happy hour (2:30 to 6 p.m.) to groups of T-shirted tech workers relaxing over cocktails and oysters after a long day of coding.

“Crème brulee is my inspiration,” says Chef Miller. “You can probably walk across the street and get one at the pizza place, but to do it simply, perfectly, with just four ingredients—that’s the hard part. I take that approach to all the food here. Just do it the way it should be done.”

There may not be any roosting pigeons at this DoveCote, but the wealth can easily be found on the plate.

An unexpected surprise at DoveCote is the very French breakfast bar, situated in reach of the bank lobby, where glistening glass cold-brew coffee towers supply caffeine on tap while the DC pastry ovens turn out croissant, fruity gibassier and breakfast-on-their-own bacon cheddar muffins. A very fine cup of espresso, macchiato or cappuccino (before noon only, please) can be had while remembering things past—perhaps Harvey’s—over a plate of madeleines.