A Twist on Flavor

WHEN Julie and Kevin Casey wanted to open their own restaurant in their still-underdeveloped neighborhood, they sat down with a simple question: What does College Park need?

Their answer turned out to be a small hangout, eatery and bar called Outpost Neighborhood Kitchen. And with a very satisfying seasonal menu of self-described “twisted American” dishes, it might just be our answer as well.

Julie had been on the corporate side of food for 25 years, working for Outback and Darden. Later, her organizational mind turned to consultation as a kid-friendly expert called The Restaurant Mom. 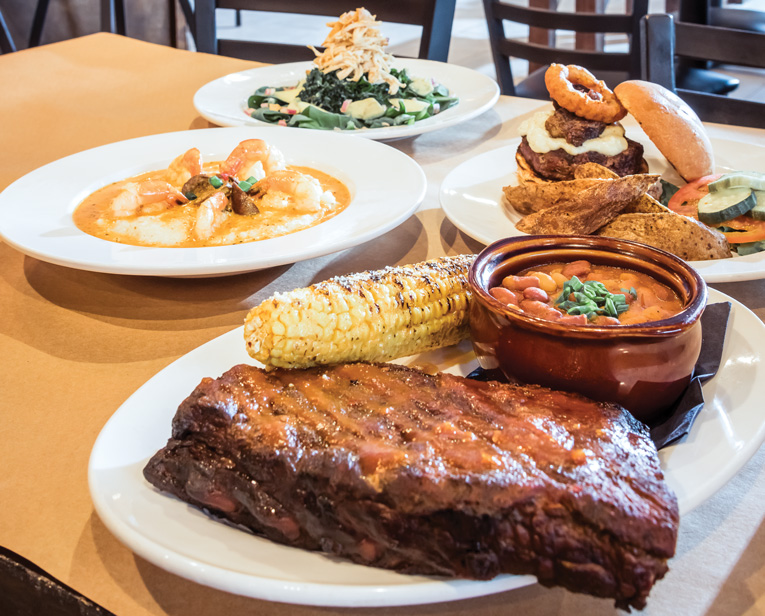 “Julie is the brains,” Kevin says, as well as chef and recipe developer, while he takes care of training servers and daily operations. “She doesn’t have a culinary degree; the things we do here come from our travels. Whatever catches our eye in New York or Europe is potentially a dish.” Family connections also emerge; Outpost pastrami is from Julie’s grandfather’s recipe, and Polish traditions from Chicago influence other dishes.

A couple of items on the summer menu are two sides of a similar, delicious coin. Shrimp and grits ($14) combines white cheddar and Parmesan with grits to nestle toothy shrimp and a spicy Cajun brown butter sauce and chorizo. The shrimp and seared scallop “Cajunara” ($22) offers shellfish in a bacon-based variant of carbonara served on an impressive  risotto. Both sauces have an aggressive but not overwhelming heat and complex flavors.

Outpost’s location has a long food history. In the 1970s it was a branch of Lee’s Famous Recipe Chicken, Lee being Colonel Sanders’ nephew. Many changes of hand later, the space was inhabited by a Dunkin’ Donuts, a serendipitous placement for the Caseys when DD moved four blocks north in late 2014 and left behind a massive oven.

The behind-the-scenes oven is the only trace of donutdom left. The 1930s wilderness lodge/bar/speakeasy concept at the 16-table Outpost is aided by rough wood and corrugated steel lining the walls and bar, light fixtures made of orange crate slats, and servers in plaid shirts. Lucky for them, they are the trappings of modern hipness as well.

As you might imagine, meats play an important role in the urban wilderness.  Ericsson ribs ($18-$24), smoked pork ribs cut St. Louis style, are covered in a house-made smoky-sweet sauce. The full rack is enough for several meals. The burger ($11)—pardon me, the Outpost Classic Burger—is a thick, juicy patty towering with house-made bread and butter pickles, pimento cheese and fried green tomatoes, creating a genius flavor profile. Turkey and black bean patties are also available for the beef-intolerant.

Service issues still exist when the place gets busy, but the break-in period of a small restaurant is harder than a large one—there’s nowhere to hide—and when it is working, which is most of the time, the place runs very smoothly indeed. The clientele is a perfect multi-aged cross-section of life in College Park, which was exactly the idea.

Kevin Casey often stops at tables and asks patrons about their meal. If they say it was good, he has a quick response. “How can we make it great?” he’ll ask. “We’re working at making it great.”

The heart of a community resides in locally owned neighborhood restaurants like Outpost. And I think they’re on the way to being great.

One thing missing from quiet College Park has been a place to sneak out for good late-night music. Outpost provides one with monthly “secret” speakeasy nights, when the lights are dimmed, the music is loud (artists like Thomas Wynn and the legendary Eugene Snowden play until 2 a.m.) and the password is “Louis Armstrong.” Oops.