Masaharu Morimoto reflects on family, culinary philosophy, and the restaurant realm that has him on a last-name basis with fans in Orlando and around the world.

Morimoto Asia, a towering presence at the phoenix that is Disney Springs, is an ultra-hip vision of pan-Asian delights created from the mind of Iron Chef Masaharu Morimoto. His first restaurant to travel beyond sushi into a pan-Asian expedition, its quirky takes on Chinese, Japanese and Korean dishes enhance a substantial sushi menu that can sometimes be acquired directly from the hands of the Iron Chef himself.

A conversation at the upstairs bar with Morimoto provides an insight into a thoughtful, focused practitioner of the sushi arts, with a finely tuned sense of humor about himself. 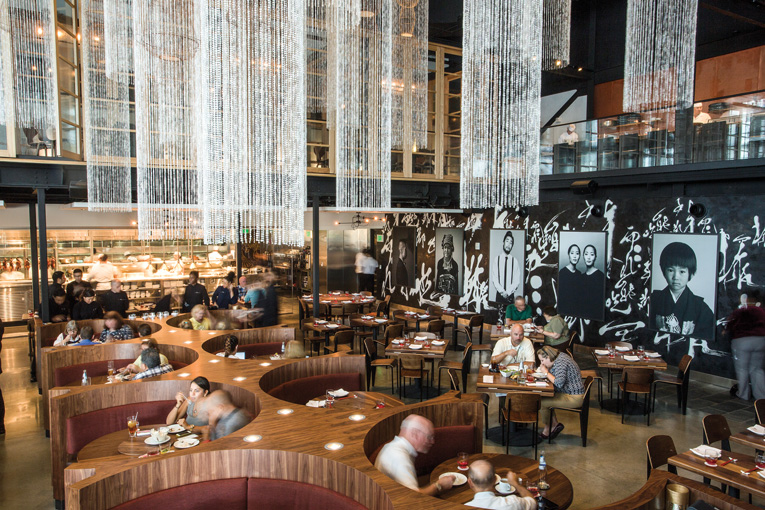 “I think I should move to Florida,” he says. Dapper in a Uniqlo jacket and designer glasses, he’s leaner and more distinguished than in his days in the kitchen arenas of the Iron Chef and Iron Chef America shows, which more or less pioneered the cooking competition genre. He counts on his fingers, “Tax issues. Getting old! I like golf!”

More than 2,000 people sample the pan-Asian offerings at Morimoto Asia every day, his creations spotlighted in the massive restaurant that is Morimoto’s first location not focused exclusively on Japanese cuisine. Fishing baskets and steel beads form impressive 20-foot long chandeliers, and a continuous stone ribbon runs from the Forbidden Lounge upstairs, outlining the glass bottle lighting (a holdover from the building’s fictional beginnings as a bottling company). There are anime cartoons and graphic photographs throughout, framing the compartmentalized open kitchen.

Morimoto creates every item on every menu in every one of his 11 restaurants. His Peking Duck ($27 for two) presents 24-hour marinated duck that is roasted, then fried, for a crispy skin, offered with steamed dan bing wrappers and house-made sauces. The superb sweet-and-sour branzino ($34) is served as a whole, unboned fish with a dash of shredded vegetables and sweet and sour sauce. Noodles, always a go-to for me, are admirably represented by the suddenly popular ramen (pork or duck; $16-$17), pairing toothy egg noodles with well-crafted and aromatic broth. And the Singapore laksa ($17), one of my favorite dishes, adds rice noodles and chicken meatballs to spicy curry and coconut soup.

Sushi is what made Morimoto, and, while he lives in New York City and jets around the world to his other locations, you can find him holding court at the upstairs sushi bar whenever he’s in Orlando (which is surprisingly often). “I eat sushi every day,” he says. “But not at home. I just released my second cookbook, Morimoto Home Cooking, but I don’t cook anything at home. Zero. I don’t watch cooking channels. Relax!”

Born in 1955 in Hiroshima, Japan, Morimoto had two dreams as a child. “I wanted to be a sushi chef, and professional baseball player.”

It’s not often one can pinpoint the moment a life changes, but I watch Morimoto’s face as he tells his childhood story and can clearly see the birth of the Iron Chef.

“My family was poor,” he says. “My father was a technician in a printing company (what’s called a “salaryman” in Japan). Every month at payday, he brought very little money to our house.”

“Two times a year, we would get on a train to a major station. First, to a coffee shop, my parents get coffee, and me and my younger sister get chocolate sundaes. Then we walk five minutes to a sushi restaurant.” He laughs. “Sundaes first, then sushi. Everything in the sushi restaurant was very cool: white hat, white jacket, every movement was so cool,” he says, tapping a cupped palm with two fingers, a gesture of making sushi he repeats regularly, almost subconsciously. “And sushi was very delicious to me.”

He thinks back to the 9-year-old boy. “The most amazing thing; my parents—my mother and father were …” he strikes a fist into his hand, meaningfully. “But in the restaurant, my mother pours sake for my father, thank you very much, my father says what about you. Very close, very happy.

A shoulder injury ended his promising baseball career in high school. It was then that he “jumped into the sushi world. I didn’t go to culinary school, just started working in restaurants. I watched, I tasted. Steal and copy, first. Then later I could add my DNA, my originality.”

The peripatetic Morimoto expresses his DNA at his restaurants in New York, Philadelphia, California, Hawaii and Boca Raton, as well as with his own lines of beer and sake.

“I have two restaurants in India; Mexico City; Tokyo”—he chuckles—“Dubai, Bangkok … using those influences. I learn how to use inspiration from different people, different cultures.”

The young Morimoto’s first business was a coffee shop—yes, it had ice cream—and then an acclaimed sushi restaurant. He moved to New York City in 1985. “I bought a round trip ticket to America—and never used the return ticket.” Stints at the Sony Club and the groundbreaking Nobu led to his celebrated roles on Iron Chef and Iron Chef America.

“I didn’t feel famous. People call me a celebrity? I’m just a chef.”

But, I say, everybody knows you.

“Yeah … amazing, huh?” he says, then erupts in laughter.

I tell the Iron Chef that, at this time in his life, he should open a Morimoto coffee shop. He looks at me, then his gaze moves up in contemplation.

Many Doors to Explore
The upstairs outdoor terrace at Morimoto Asia has what might be the best view of the Disney Springs lagoon, rising above the sometimes noisy crowd. Outside, the addition of a Street Food window brings quick-service ribs, octopus fritters and savory bao to the walking populace. Look for the “unmarked” door on the side of the building to enter the Forbidden Lounge (not really a secret, but Disney Springs isn’t really a spring, either) with its late night menu until 2 a.m.