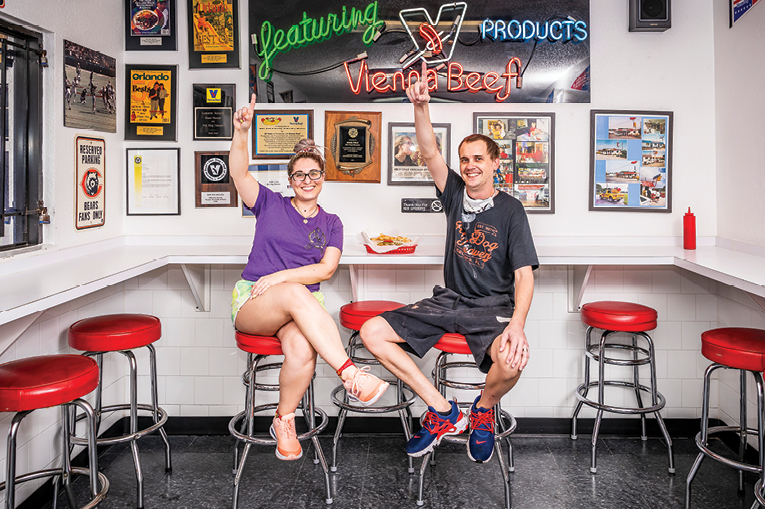 If you’re driving down Colonial, just west of 436, you can’t miss it. The sign reads “Vienna Hot Dogs,” but it’s the giant wiener speared by an equally giant fork that arrests your eye. Hot Dog Heaven looks like a roadside stand from the 1960s, with its simple picnic-bench seating out front and counter space inside. It’s not fancy, but it is charming and fun, and the dogs are pretty darn delicious. Chicago natives Mike and Beth Feld began dishing up their Authentic Chicago Hot Dogs in 1987, but the couple retired last year. Their daughter Holly and her husband, Jarette Cowden (pictured above), carry on the tradition, serving 100 percent beef Vienna franks. Choose from a variety of combos including a BBQ Dog (BBQ sauce, onion, pickle), a Reuben Dog (1000 Island dressing, swiss cheese, kraut) and a Jalapeno & Cheddar Dog (deep-fried, served Chicago-style). All are served on a steamed poppy seed bun and are reasonably priced at $4 or less. You can upgrade to a “Basket” that includes fries and one side for a couple of extra dollars. This is clearly one of the best deals in town. -H.D.

Michigan transplant Jennifer Whitmer worked near downtown in 1984 when a colleague insisted they grab lunch at a little spot around the corner. Beefy King was the spot, and the $2.22 special included the Roast Beef sandwich, Beefy Spuds and a drink. “The steamed buns, the spuds—it was just a great little combo!” she says.
Thirty-seven years later, Whitmer and her husband, Harry, are still Beefy King regulars. Her children are devotees, too—so much so that when she visits her adult son, Zach, in Nashville, Whitmer asks Chef Woody to prepare and deep-freeze two “Number 6” menu items— two-meat combo sandwich is a beef and pastrami with cheese—to deliver to Zach.
The classic favorite Beefy King meal deal is now $7.75 for a regular beef sandwich with spuds and drink. Fans are inspired to visit by following @Beefykingorlando on Instagram, where they’ll find savory bites like the BBQ Beef with cheese, slaw and tomato, and sweet handspun milk shakes (the orange shake, which tastes like a Creamsicle, is a favorite). Non-beef eaters can choose smoked turkey, chicken or a veggie sandwich. Regulars can’t get enough.
Says Whitmer: “We go at least once a week. We just drove through yesterday!” -J.H.

Mexican hot dogs meet wrestling? Believe it. Franco Furtero is a World Champion Wrestler and the founder of Cholo Dogs. Furtero began his career managing a hot dog cart at wrestling matches. While behind the hot dog cart he learned not only the craft of making delicious weens, but he also learned how to wrestle. He seized the opportunity one day when one of the wrestlers did not show up; Furtero grabbed his mask—and a star was born. 108 World Championship belts, 76 countries and one broken heart later, Franco ended up in Orlando where he established his lifelong dream, Cholo Dogs. We can’t say no to the El Borracho ($6.50) a Nathan’s all-beef hot dog, topped with Mexican street corn, cotija cheese, tajin and cilantro. Another favorite, the La Pelirroja ($6), comes topped with avocado sauce, crema, red onions and tajin. Follow them on Instagram for their latest schedule. -C.W. 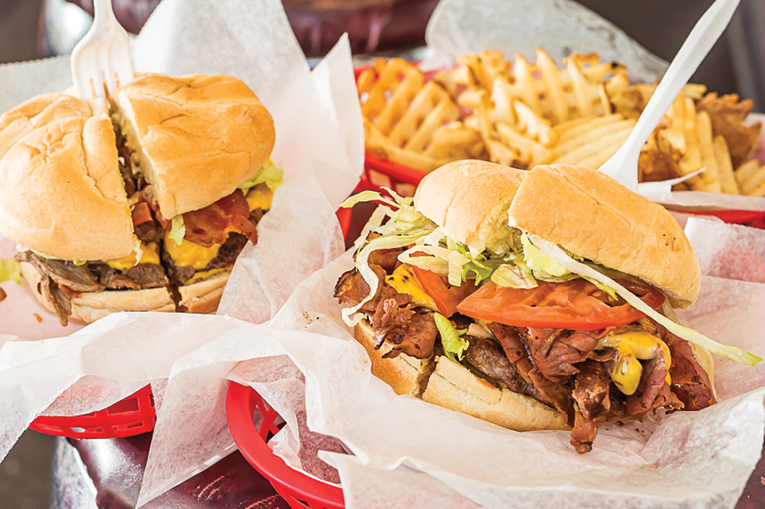 Kappy’s has been a Maitland institution since 1967. If you’ve never been, chances are you’ve at least seen the sign of this true American classic diner as you passed by on 17-92. For half a century, folks have come from near and far to enjoy Kappy’s. The spot offers several picnic tables perfect for outside seating, but the inside is snug, with a classic 1950s diner vibe offering just a few seats for patrons. Order at the front window and proceed to the side window for pick-ups. You won’t go wrong with Kappy’s Cheesesteak ($7.95) made with ground chuck, grilled onions and American cheese, some French fries ($2.05) or coleslaw ($1.50) and a banana milkshake ($4.95). -C.W.