The pandemic has changed much on our dining scene—but not the level of excellence each of our five honorees brings to the table. 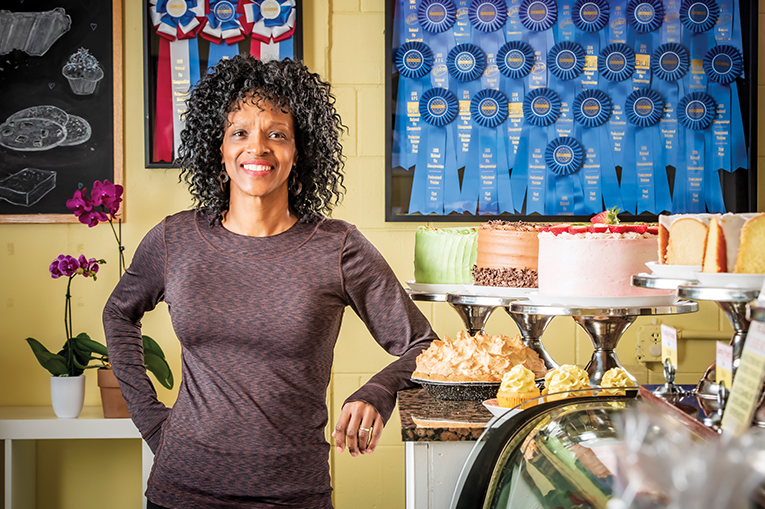 Evette Rahman opened Sister Honey’s in 2012 and soon began winning ribbons and accolades for her baking.

“Our philosophy,” she says from her SODO-area shop, “is to make a quality product, provide people with something to enjoy. I think to myself: ‘I’ve got to make this right.’ ”

Over a slice of extraordinary apple pie, she talks about her skills and where they came from. “It’s been a baking journey. Sometimes I think if I had gone to formal culinary school, I would have learned things that would make this easier. But because I didn’t, I can think out of the box and create things that are a bit unique.”

Rahman is known for her moist, custard-filled coconut cake—and a four-layer pistachio variant that is killer; a sweet and billowy lemon meringue; and hand-squeezed Key lime pies.

“My parents were both from Jamaica and into natural foods,” she says. “I was used to quality ingredients at home. My mother was always baking and I wanted to be around that. If I’d make something that wasn’t quite right, she would be like, ‘What was that?’ Sometimes, I still hear her saying things while I cook.”

Her efforts have been applauded by retail customers (she’s about to offer online shipping of her products), her main taste tester (husband Andy) and honored frequently in the rarefied world of baking competitions. She won the 2019 World Dessert Championship for her Razzleberry swirl Key lime pie stuffed cookie against more than 1,400 other competitors. She’s also won two World Dessert Championships (the first baker to win twice) as well as an American Pie Council Championship, three years’ Best of Show at the APC National Pie Championships and numerous blue ribbons.

“I love competitions,” she says, “not for the end result, but the process. Testing recipes for that final product, and seeing what others are doing, is the best part.” She will compete in August for the Final Table grand prize, worth $100,000, in Indianapolis.

“I’m thankful to everyone who ever cooked and baked,” Rahman says, “and put their recipes out there for me to try.” 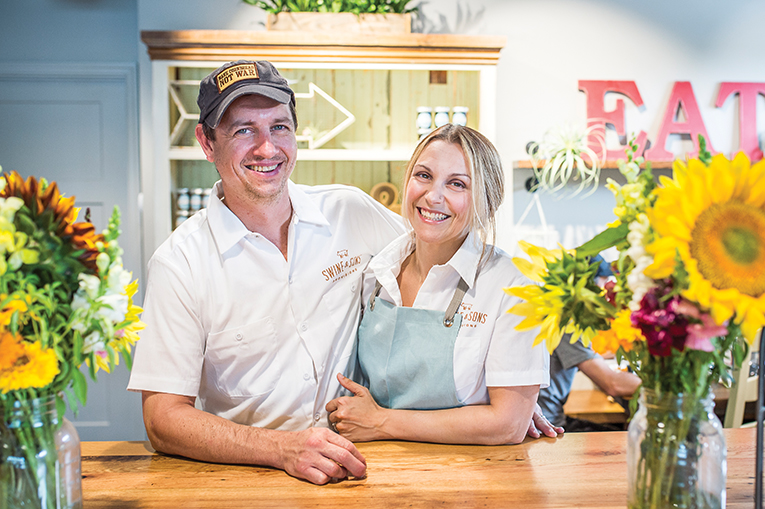 Rhys and Alexia Gawlak were one of the several couples inhabiting the kitchen at the groundbreaking Ravenous Pig gastropub when it opened in 2007. When they split off to form Swine & Sons five years ago, they established their space as a haven for lovers of handcrafted foods, great sandwiches and memorable breakfasts (including several Dining Awards nods from yours truly).

Rhys and Alexia are both Culinary Institute of America-trained, fine dining experienced chefs, remaining passionately enthusiastic about farm-to-table, hyper-local and faultlessly prepared food. Even seemingly simple items such as deviled eggs or macaroni and cheese have thoughtful touches that make them worth including in your lunch sack.

And then there’s the crispy hot chicken sandwich.

“Hot chicken, hot chicken, more hot chicken,” Alexia says. The signature treat helped win the couple a $16,000 first prize on the Food Network show Guy’s Grocery Games (they also made a halibut dish that turned compulsory carrot and pumpkin baby food into something the judges raved about). Their triumphant sandwich is a Swine & Sons staple, a dark meat, smoked and buttermilk-battered thigh, coated in proprietary spices and served on a toasted potato bun. “We’ve seen an increase in traffic since the show was on, and a lot of first-time diners,” Alexia says.

Rhys plays a long game. His first love is charcuterie, smoking handmade sausage and skillfully butchered cuts of meat that may take weeks or months to mature. Alexia cooks fast and hard. At a food fest in Amelia Island last year, she devised and cooked an extraordinary fish dish for several hundred people in less than an hour—after catching the fish herself.

The Gawlaks transitioned into a pickup business at their Winter Park eatery during the age of isolation, preparing lunch and dinner options and cocktails to go. Of course, that has curtailed their formerly thriving catering business, which they are eager to resume. “Catering is super interesting,” Rhys says. “You’re redesigning your kitchen with every job.” It’s that very flexible attitude that has kept them looking toward the future. swineandsons.com 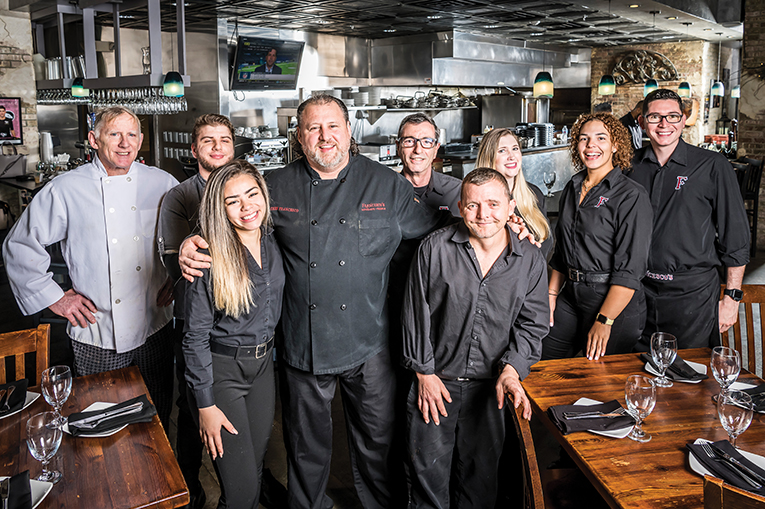 Francesco Aiello and some of his restaurant family (ROBERTO GONZALEZ)

From the outside, Francesco’s, flanked by a Jimmy John’s sandwich place and a Walgreens drugstore, looks like any Maitland strip mall restaurant. Inside, it is (pizza joke aside) a slice of Palermo, the ocean-facing capital of Sicily, where chef/owner Francesco Aiello was raised to love seafood and hospitality.

“It’s a passion I got when I was a little boy,” he says of cooking. “In my house there was always a beautiful smell. It stayed with me.”

Aiello opened his eponymous restaurant in 2011, after cooking at The Sicilian in Casselberry and Terramia in Lake Mary. He is a cordial force wherever he is in the restaurant—not always cooking, but always guiding the kitchen, while also asking diners “How is everything tonight?”

“If you don’t love this business, you can’t go anywhere,” he says. “You work many, many hours. It’s not a 40-hour job.” It’s impressive to watch the calmly efficient crew. Nino Carrera, a veteran of six years, bringing plates to appreciative diners; Giorgio Solano, the expert pizzaiolo getting perfectly charred pizza from the 700-degree wood-fired brick oven; Michelé Pennington, the adept sous chef; servers and hosts like Eno, Ciara, Kennedi and Kyra around the restaurant; each of them and more have practiced the dance performed every night through this space. “I spend more time with them than my own family,” Aiello says. And the past few months have been full of Chef Francesco cooking dinners and family meals for pickup or delivery to what, to him, seems like every household in the area.

The restaurant is famous for its spaghetti alla carbonara, fresh pasta made simply with pancetta, egg and black pepper. Marinara, Bolognese and Alfredo sauces are done in-house, and Aiello’s pastry chef father, Paolo, has created desserts like cassata al forno, a fresh ricotta cake specialty from Palermo. And Francesco has his favorites.

“Everything is good on the menu, but I’m born in Sicily; I love seafood,” he says. “Order the seafood.” francescos-rist.com 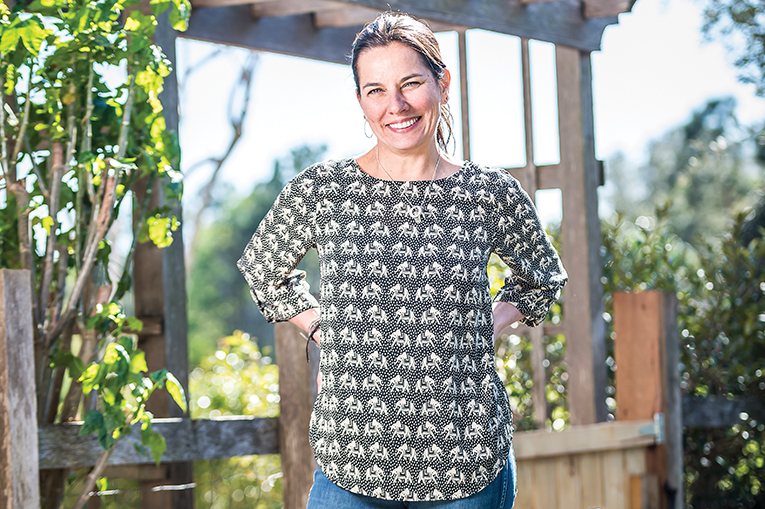 When she opened Primo in 2003, Melissa Kelly—inspired by family tradition, enlightened from her time at California’s legendary Chez Panisse, and practiced from several years at her farm-surrounded Primo in Maine (the prime Primo)—brought the words “organic,” “farm to table,” and “locally sourced” to the upscale local scene.

The multiple James Beard Award winner’s restaurant, located at the JW Marriott Orlando, Grande Lakes, is named after grandfather, Primo Mangani, whose picture has a place of pride in the lobby. It has spawned some of the leading lights in local dining,  including fellow 2020 Hall of Fame inductee Alexia Gawlak, and HOF members Julie Petrakis and Kathleen Blake, both James Beard semifinalists. “I think about the community of chefs that have come through this kitchen,” Kelly says. At this point she gets a little teary. “I have a lot to be grateful for.”

Kelly runs her culinary compound in New England of free-range chickens, ducks and pigs, wholly organic produce, beehives, and the award-winning restaurant, as well as keeping a close eye on Grande Lakes with its own organic garden, and the Primo in Tucson. When Primo Maine is closed for the winter, Kelly can be found in Orlando.

Grandfather Primo was a butcher in the small Italian town of Cesena, near Bologna, and Kelly learned through him and her grandmother how to cook. Her career took her from the Culinary Institute of America to restaurants in West Virginia, Miami, New York (including the “haunted” Beekman Arms), Denver and San Francisco.

The Grande Lakes compound closed during the pandemic, and Kelly has concentrated on a hectic takeout business in Maine to keep that property somewhat stable. But she says a multimillion-dollar renovation of Grande Lakes is still on the horizon despite the national uncertainties, and she is excited about it. “When I was offered this space 17 years ago, the restaurant was already laid out,” she says. “This is our chance to make it what it should have always been.” She plans to focus an already splendid menu toward Southern Italian food, including the pizza of her childhood: part Sicily, part Long Island, where she grew up. The garden will remain (perhaps larger and closer to the restaurant), and her very seasonal menu will include more seafood and even more intricate pastas.

“At Chez Panisse, I learned that home food and restaurant food didn’t have to be different. They would look at my plate and say, don’t touch the food so much, just put it on the plate and make sure its cooked right. It was like my grandmother’s food … and that’s it. Full circle.”

As long as the circle includes Orlando, we are the ones who should be grateful. primograndelakes.com 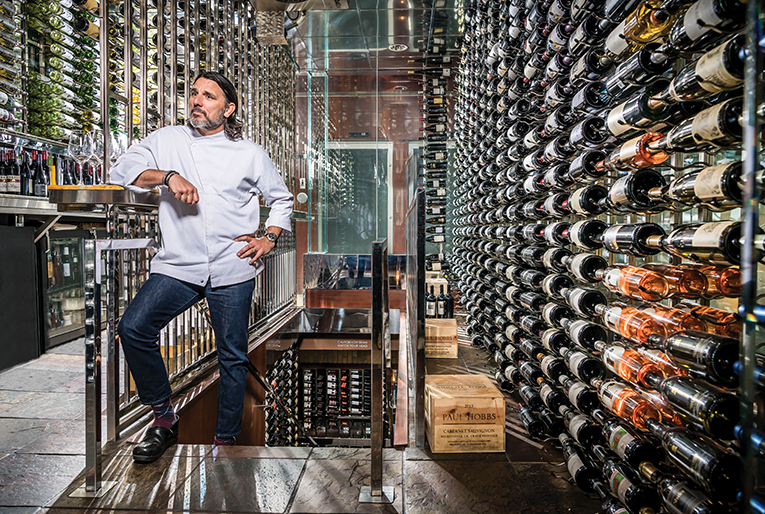 Brandon McGlamery’s first culinary job was with the celebrated chef Jeremiah Tower, and he has worked at the pinnacle of his craft in places like The French Laundry and Chez Panisse. He’s been honored by Wine Spectator, and twice named a semifinalist for James Beard Awards. McGlamery joined Luma, with its New American menu, in 2006 (it had opened the year before); opened Prato, serving reinvented Italian, in 2011; and Luke’s in 2017.

So how can someone chef and also oversee an empire?

“I’d like to think that I’m a partner with everyone,” he says. “I’m definitely not in the kitchen as much as I used to be, which was my love. I am but not full time like before.” It’s a testament to McGlamery’s ability that he has adapted to that inevitable evolution without losing the quality of the kitchens.

“The people that I’ve picked, and have picked me, they need to make this journey with me. I’ve got three awesome guys right now.” Michael Cooper is chef de cuisine at Luma; Brian Thorpe, chef di cucina at Prato; and Jason Campbell, executive chef at Luke’s.

“On a day-to-day basis I might spend two hours in the kitchen. There’s no need for me to be first in and last out anymore.” At one time, McGlamery had a reputation of being a fiery chef. “I try to take a more Buddhist approach to how I do things these days,” he says. “I ask a lot of questions. I want to have that collaboration with the other chefs. That energizes me. It’s a gift.”

Becoming the public face of the restaurants was not in his initial game plan, but it is something he says has become part of his persona. “I get to be a little more conversational with people out in the restaurant, and I never thought that was going to be my role. Having the time to see what each restaurant is doing, to think about how we can go back to great ingredients and simpler, better food, how I can take it higher. That keeps me into it.”

The zen-like McGlamery looks back on his history and says, “The bottom line of why I got into this was to make people happy.”

I called Chef Brandon a virtuoso back in 2011. The prodigy has become the multi-focused maestro and keeps getting better. lumaonpark.com; prato-wp.com; eatatlukes.com