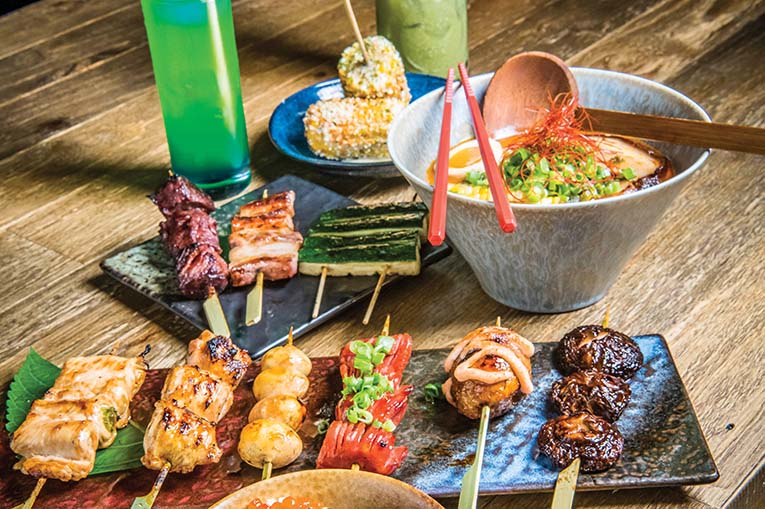 The restaurant Susuru (meaning “to sip” or “slurp”—you’ll do both) is like a basement rec room in some Osaka suburban home, wood paneled and plastered with mid-century tin advertising signs, pop culture toys and sideshow trinkets. With a full, open kitchen, and a giant mural outside by Orlando artist Boy Kong. Don’t bother trying to imagine it, just take the hike to Palm Parkway and experience this delightful izakaya in person. To explain, an izakaya is a pub where people gather, have a drink and share small snacks. Co-owner Lewis Lin (of College Park fave Jade Sushi and New Asian) gets this model perfectly. Charcoal-grilled skewers of chicken bits from meatballs and wings to skin and knee cartilage; super crisp tori senbei (chicken thigh meat “chips”); grilled yellowtail collar and beautifully crafted rice bowls; and rich ramen with 12-hour tonkotsu bone broth or creamy chicken tori paitan. There’s a sake menu that goes from reasonable to very expensive, Japanese beers and whiskies, and superb cocktails crafted by local mixologist Nadine Rodriguez (I love the Astro Boy Mule that comes with a toy). The staff and cooks yell “Irasshaimase!” (“Welcome!”) as you enter; it’s an acknowledgment of your presence that needs no response. Just head for your seat and enjoy. 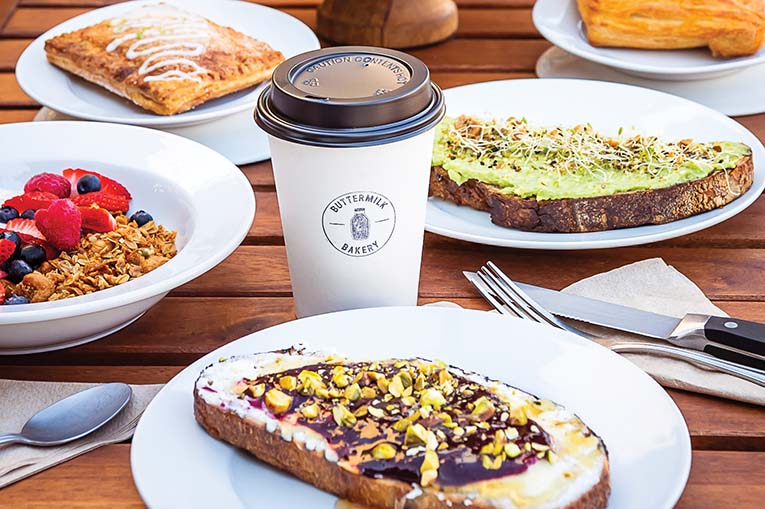 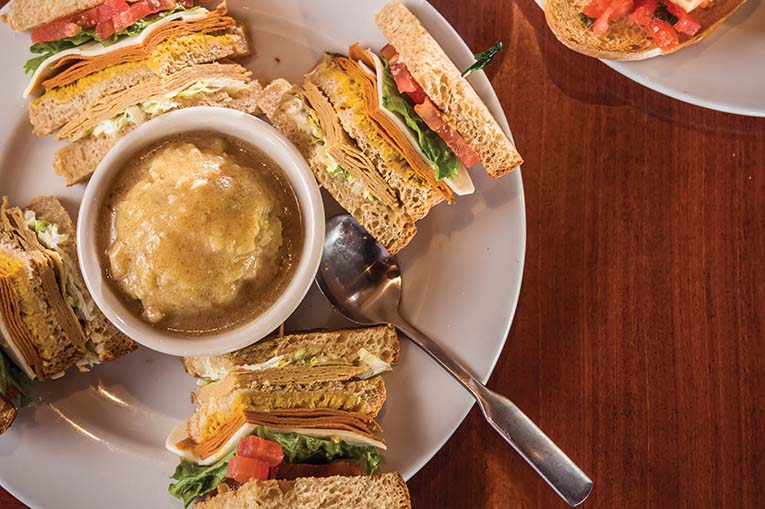 Kelly and Laina Shockley have been running the fully vegan Ethos since 2007, keeping to their socially conscious menu of no animal products, dairy, honey or eggs. The comfort food fare makes even carnivores comfortable in the face of vegetables, and Chef Kelly (who was the force behind the famed Vegan Hot Dog Cart for many years) crafts an appealing lineup without sacrificing taste. His talents show in a beautiful baked calzone crust surrounding tofu ricotta, and wheat and shiitake mushroom powder “chicken” and caramelized onion that fills a flaky empanada. There’s sausage made from wheat gluten; a Philly cheese steak-like seitan sandwich; tofu in place of chicken in a coconut curry wrap; and chickpea crab cakes. Each item considers flavor and the “ethos” of veganism in equal measure. 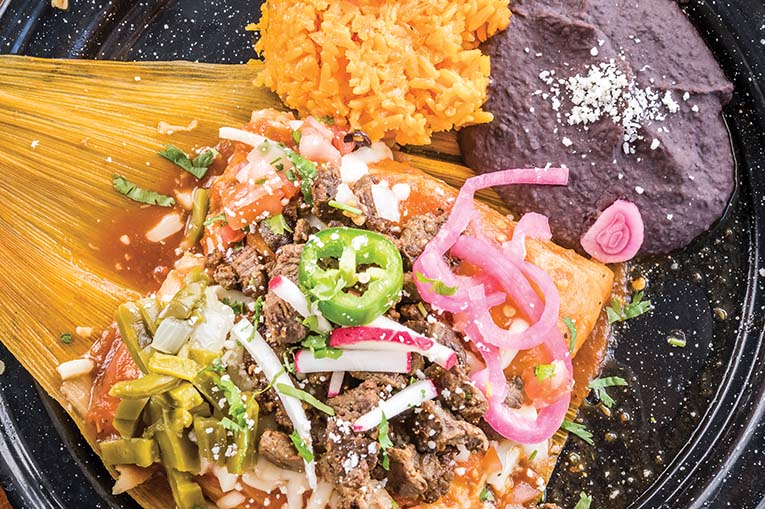 In 2011, Fernando and Jennifer Tamayo were brainstorming at 2 a.m. when Jennifer said, “We should start a food truck.” By the next morning, Fernando, a chef for most of his life, was already planning. We’ll do traditional tamales with a twist that nobody has ever done, he announced, and the results have become celebrated. Fernando’s family owns the four local Tacos El Rancho restaurants, with most of the menus devised by him and his mother, Maria. “We’re high school sweethearts,” Jennifer says. “He went to Winter Park High School; I went to Colonial.” The stationary version of Tamale Co., in the hip and getting hipper Hourglass District, opened a little over a year ago. The grand opening attracted 12 hours of lines and 675 customers, when they had expected 200 at most. “I grew up in this neighborhood, just down the street,” Jennifer says. “I really like that I know Mr. and Mrs. Smith are going to come here Wednesday nights, have a beer and some tamales and then walk home.” More than a dozen Mexican beers and micheladas beer cocktails complement creamy corn flour tamals, masa sope and tacos for breakfast, lunch and dinner. “It’s actually gourmet, handcrafted food,” Jennifer says. “Tamales are my thing.” The neighborhood agrees. 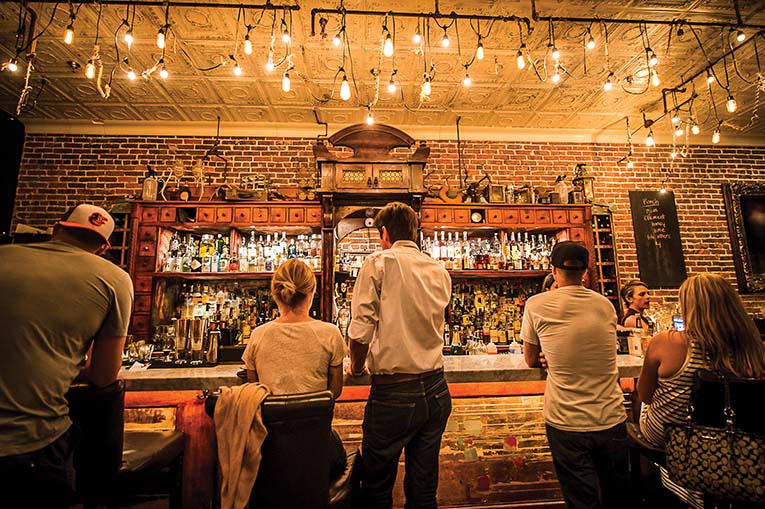 In the early 2000s, musician Gene Zimmerman could be found playing with his band, Roadside Giant, at the old Sapphire Supper Club on Orange Avenue. These days, Zimmerman’s stage is 260 feet away, in a tiny sliver of the 1925-built Autrey Arcade, in a place aptly called The Courtesy, easily passed by without noticing on the way to somewhere else. These are difficult times for bars, which have had to close, open and close again under official restrictions, but Zimmerman still offers take-away cocktails, and even without the speakeasy-esque, atmospherically lit environs, they’re still delicious.  And the occasional live-streamed hangout with cocktail-friendly music adds downtown atmosphere. Zimmerman pioneered craft cocktails, hand-fashioned bitters, obscure spirits and expert mixologists in a town filled with dollar beers. Cocktails are not my main drink, but a gin, Amaro and jam-based Breath of the Wild cocktail I once enjoyed via barkeeper Justin Levaughn has stuck with me. “As it says in our tagline,” Zimmerman says, “the pleasure is ours; the Courtesy is yours.” 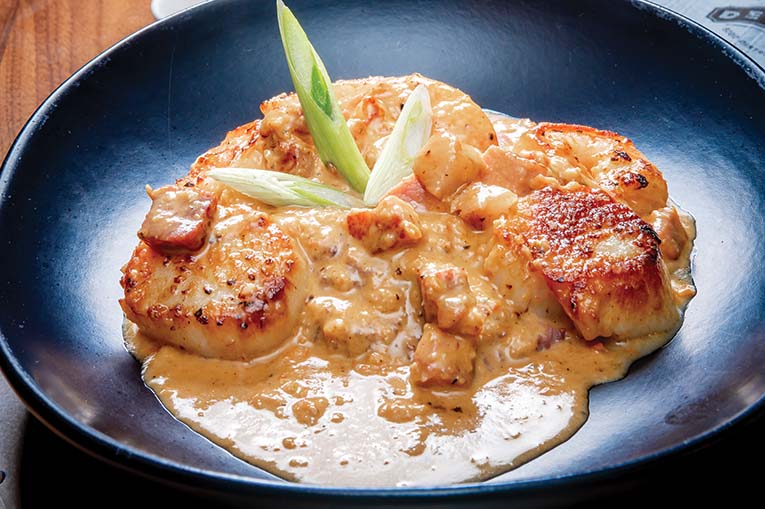 The folks running Delaney’s Tavern might disagree with my choice of Best Hotel Restaurant. Not that it isn’t a terrific restaurant—the best on the periphery of downtown proper, and good enough to potentially spur the birth of a new, hot section of Orlando. But as The Delaney Hotel president Greg Allowe suggests, “The goal is to be a neighborhood tavern, not a hotel restaurant.” And yet one can’t ignore the suave and slick hotel, digital-age friendly and Orlando Health-adjacent, that enfolds its 54 rooms around and above the Tavern, giving it an air of big-city vitality reflected in the menu. Chef Anthony Albino brings years of experience at tapas-centric Santiago’s Bodega into play, crafting beautiful bites like house-cured corned beef, blue crab beignets, honey chili pepper-roasted Brussels sprouts or a picture-perfect fiochetti beggar’s purse pasta. 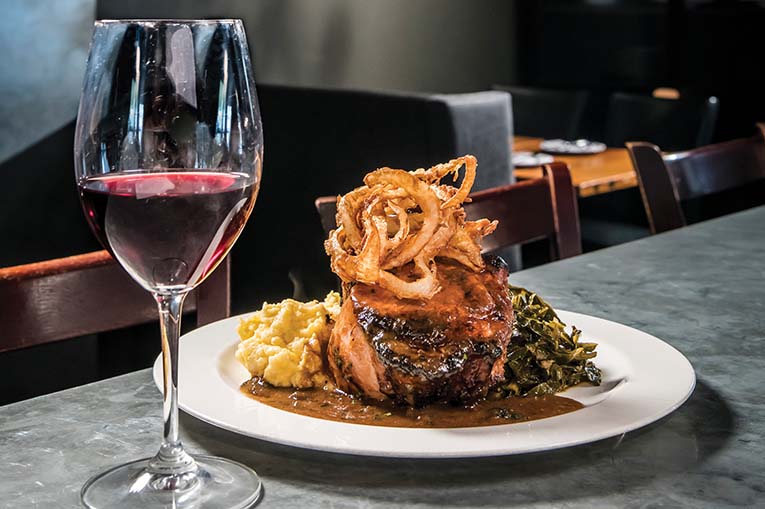 Since arriving from Providence, RI, Chef Loren Falsone has made a career of clandestine eateries, from the almost mythical restaurant called The Table, to the 7-year-old (can it really be that long?) Pharmacy, which started as an undercover cocktail bar disguised as an unmarked elevator. Pharmacy expanded into The Table space after it closed a few years ago, and may be the only speakeasy that now takes reservations and has a marketing campaign, secret no longer—and yet, possibly is still a mystery to you. The magic behind the entrance, still framed by elevator doors, owes to Falsone’s incredible talent and creativity. Partnering with Dominick Tardugno, the mixologist behind Pharmacy’s cocktail program, she creates menus that thrive on sparks of spontaneity while keeping staple favorites like spaghetti Bolognese (with “sexy scallions”), a cheese fondue with sourdough croutons made from a 100-year-old starter, and hand-cut fries that are worth every penny of $18. Pork and beef are from Florida Fresh Meats in Ocala, rock shrimp are via Cape Canaveral. The space itself has recently expanded to include a European-style outdoor brick alleyway patio (very Brooklyn), a new lounge, live jazz and the return of the marble, 22-seat “table,” taken out of storage and given pride of place for communal dining or special occasions. Pharmacy is the perfect prescription, secret or not. 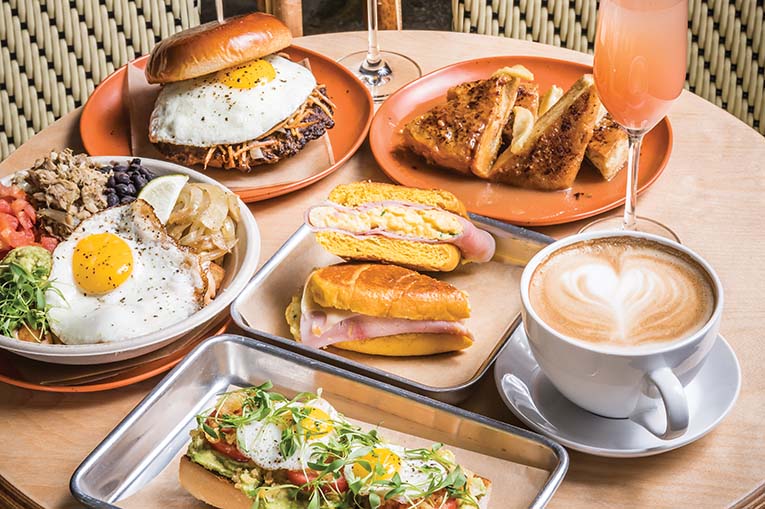 This past year, Orlando magazine Dining Hall of Famer Andres Corton closed the iconic (and very small) Orlando Avenue location in Winter Park and morphed the former Winnie’s Oriental Garden nearby into a new, sleek Black Bean. “We’ve gotten our fair share of customers,” Corton says, “who think the new place is ‘too nice’ or ‘too hip’ and they miss the old hole-in-the-wall. This is funny because for me it is important to evolve.” In the transition from hole-in-the-wall takeout counter to two casually stylish sit-downs (the other is on Colonial Drive), Corton has created up-to-date, “three a day” restaurants that combine almost Scandinavian hip with salsa vibration. The breakfast, lunch and dinner offerings, like shredded Havana pork, redolent of garlic and mojo, and the signature Cuban sandwich make us long for the return of casual conversation and perhaps just one more cafecito for the road. 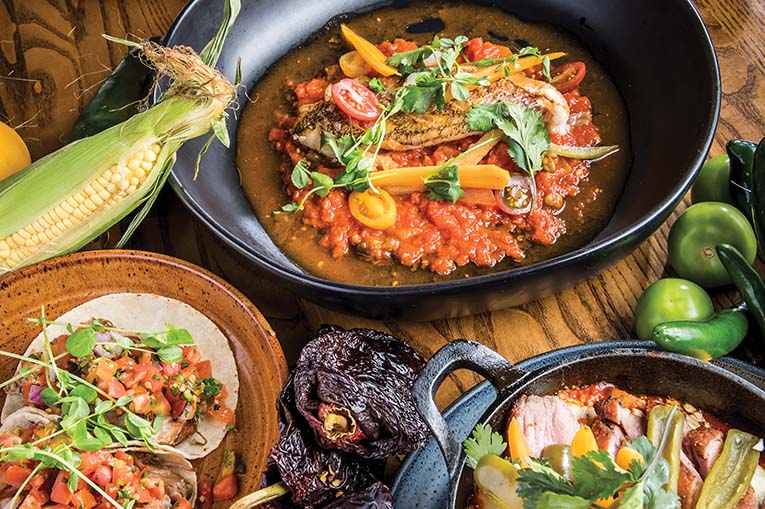 When Reyes first opened in the North Quarter three short years ago, the menu of what owner Jason Chin called “regionally inspired Mexican cuisine” hit dazzling heights and, frankly, some pedestrian valleys. Now under the superb tutelage of Wendy Lopez, one of the most discerning and craft-focused chefs in Central Florida, Reyes is alive with the aromas, tastes and sensibilities behind centuries of Mexican cooking, matching the restaurant’s expressive interior design and charming ambiance. The regions of Lopez’s birthplace are respectfully represented by her desire to craft authentic recipes, filtered through her inventive mind, that results in extraordinary duck enchiladas, crispy whole fish Veracruz and heavenly chicken mole with too many ingredients to list. Like the skill it takes to produce the 140 agave-based spirits that are offered at the bar, Reyes takes a cuisine that some might know only as fast food and creates art. 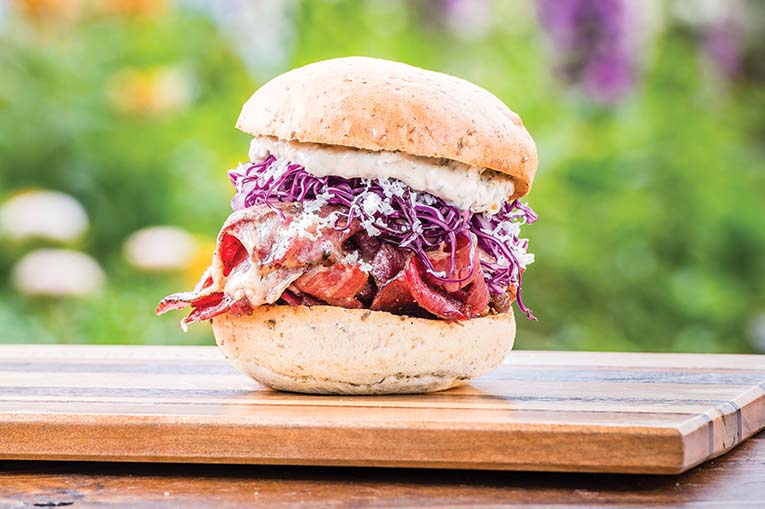 Everything about the pastrami sandwich at Hinckley’s East End Market location is something you are familiar with but probably know nothing about. Everybody knows pastrami, but to create an Old World salted, cured, dried, spiced and smoked beef this good takes a special talent. Horseradish, a wasabi-family root that goes back to Greek mythology, is oh-so-good when grated fresh (as is this) that it can (literally) bring tears to the eyes. And Havarti, the creamy, buttery (and gluten-free) Danish standard, makes the perfect cheesy companion. And did you know that Russian dressing has nothing to do with Russia, but is an invention of 1900s New Hampshire? The combination, under the practiced, classically trained hands of Matt Hinckley and served on Olde Hearth Bread’s dense rye, is superb. An extremely close second, depending on the mood, is the pressed pato Cubano of duck ham, roast duck, pickled mushrooms, mustard and Gruyère on Cuban bread. 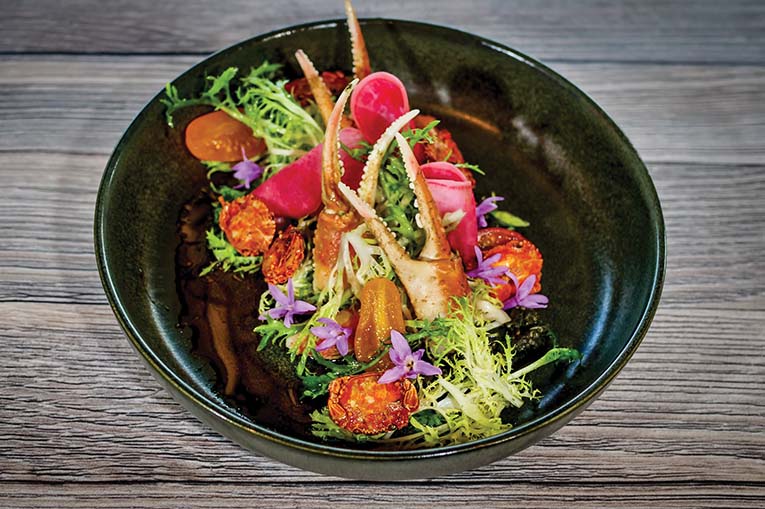 There are some good Disney-centric restaurants, and a handful (in a petite hand) of truly great ones. Victoria & Albert’s, of course; Jiko, California Grill and Flying Fish, without question. But exceptional dining within theme park confines is rarer, and of a roster that includes Tiffins, Monsieur Paul and Tutto Italia, the new Takumi-Tei, located at Epcot, rises to the apex. Everything from napkins folded like tiny kimonos to the highly ritualistic tea ceremony at meal’s end signals refinement and style, as Chef  Tyler Schmitt honors the spirit of tradition while embracing his own modern interpretation of classic Japanese cuisine. Sushi, seafood, imported Wagyu beef and imaginative takes on vegetables make Takumi-Tei the definition of “house of the artisan.”

This article appears in the September 2020 issue of Orlando Magazine.
Categories: Dining Awards, News and Features
Tags: Dining Awards
Want to read the whole issue? Download and read this issue and others on Magzter.