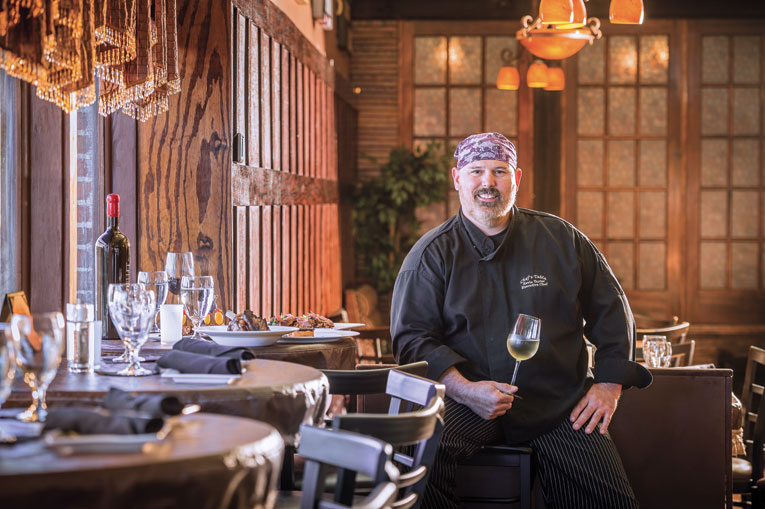 Chef Tarter calls people he likes “Brother” and would rather hug than shake hands. His Cajun generosity extends from how he greets people to the plates that come out of his miniscule kitchen to provide for the 165 seats populating Chef's Table at the Edgewater and The Tasting Room, the two restaurants that make up the Tarter “empire.’’

The Tarters, Kevin and wife Laurie, have defined the idea of small, independent restaurants, and their Chef's Table has been the perpetual winner of the “Chef's Table” Dining Awards category. And while Chef Kevin has been approached to move on to bigger things, he’s content with his tiny domain.

“I don’t have those kinds of aspirations,” says Tarter, 50. “I'm just trying to keep to what I learned in my mother's kitchen in Louisiana.”

In the Cajun household of Tarter's youth, there were five epic meals a week—and then there was Sunday. “My mom would do things with a roux that would make you cry.” He began his food career as a kid in his father's hometown restaurant, but it was a job at a Chinese restaurant in Hammond, Louisiana, that revealed the magic of a chef's life. “It was all about discipline and pride,” he says. Further discipline was learned in the kitchens of the legendary New Orleans restaurant Arnaud's, and at Disney's Victoria & Albert's and California Grill. “Our first year at Chef's Table in 2008,” he says, “I was working at Disney at the same time.”

Seasonality and local ingredients play a big role in Tarter's menu, as does respect for the ingredients and his employees. “Respect translates to what is on the plate,” he says, and that attitude is evident in any conversation, which will invariably include praise for his kitchen-mates, and his co-owner and wife.

“Laurie is the business mind behind the operation,” he says with pride. “I'm the chef; Laurie Tarter is the guts.”

The audacious experiment of a pocket-sized fine dining restaurant in small-town Winter Garden seems to be paying off, and the addition of The Tasting Room in 2011 allows Tarter to flex his culinary muscles with fun small plates and to bring in a more casual crowd. While the “fancy” dining room may feature filet mignon or roast duck, the plates at the The Tasting Room are filled with fried chicken livers and knockout fish tacos.

To Tarter, food is about three things: “Joy, companionship and celebration. Do it and mean it.” 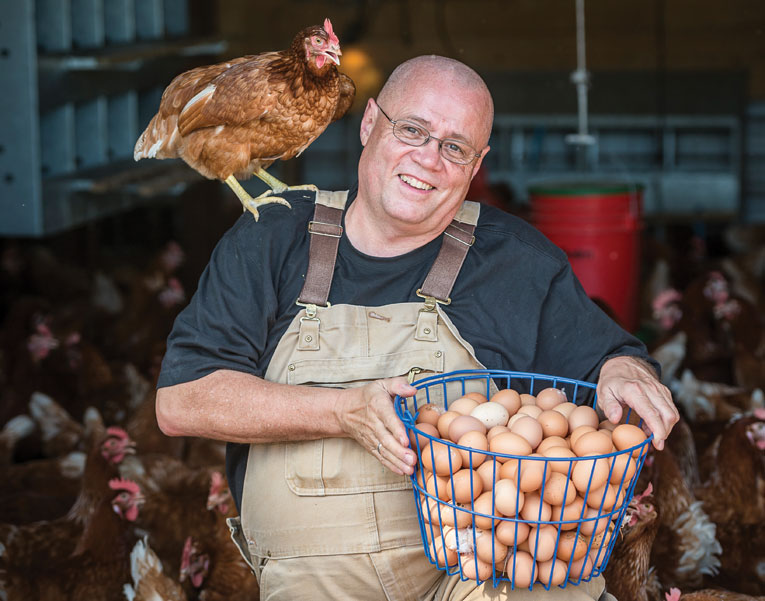 No one chef, or restaurant, or producer has had as much effect on Central Florida's evolving farm-to-table culinary scene as Dale Volkert. Since 2004, Volkert's eggs, chickens, beef and ducks have graced the tables of our most adventurous restaurants, used by chefs who seek freshness and the genuine value of the farm-to-table philosophy.

Volkert's childhood on a farm in Wisconsin exposed him to a life where fresh food was literally outside his door. While most of the 12,000 birds at his Lake Meadow Naturals farm are of the White Plymouth Rock variety, Volkert takes pride in his separate facility for heritage breeds. “These are the chickens my parents raised and cooked, and gave to me to raise,” he says. “They have a flavor and texture you can't even imagine from a commercial farm chicken.”

So-called “battery” chickens, raised in multi-level commercial facilities where a small “farm” starts at 2 million birds, have become our poor standard for poultry. Volkert wanted an alternative for his personal use, and in 2004 purchased a flock he could call his own. Kathleen Blake, owner/chef of The Rusty Spoon, had other ideas. Chef de cuisine at Primo at the time, she had heard about Volkert's fledgling egg business. “He brought me two dozen of his own beautiful, multi-colored eggs,” she says. “I told him I needed 60 dozen, like yesterday. He still tells me I ruined his retirement plan.”

Not that Volkert, in his early 60s, is anywhere near retirement. There's too much to do. His farm on the shore of Lake Meadow, just 20 minutes west of downtown Orlando, is home to chickens, ducks, geese, gobbling turkeys and bleating goats, raised without hormones, chemicals or GMOs, in open-air houses and ranging freely. Birds that are raised on soy-free and gluten-free diets are available.

“It takes a lot of land, and a lot of time, to do it right,” Volkert says. He says the corporate alternative is some 70 million battery chickens in Florida, “all in dark buildings, all invisible to the public.”

To feature the name “Lake Meadow Naturals” chicken or eggs on the menu has become a mark of pride at local restaurants, from small independents to large theme park eateries. Lake Meadow's very visible operation allows school kids and shoppers to see exactly where their food comes from—and the possibility of healthy alternatives. And that may not have been possible, on this grand a scale, without Dale Volkert. 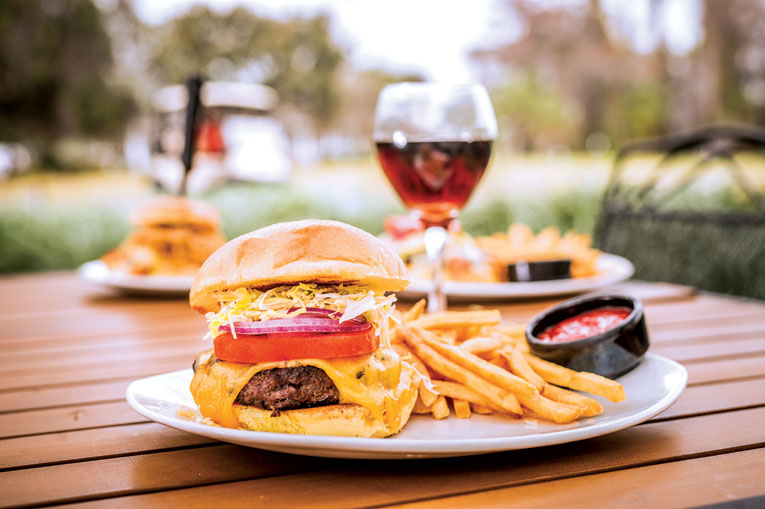 The 19th hole at Dubsdread Golf Course is a place of high ceilings and wood-paneled walls, along with boisterous, often alcohol-fueled discussions about politics and scorekeeping. It’s also home to an acclaimed king of the local burger scene: the Tap Room Classic Cheeseburger.

There aren't any records complete enough to know whether the café at Dubsdread had a burger when real estate tycoon Hanford Dann opened his 9-hole course in 1924, in the heart of the College Park neighborhood. There is evidence that a bacon-cheeseburger went for $4.25 in 1986, but no indication of whether diners in the time of Ronald Reagan held it in as high a regard as they do now.

The Classic Cheeseburger is $11.90 these days, and its excellence is not open to dispute. Steve Gunter, owner of The Tap Room at Dubsdread since 2001, gives credit to the burger's simplicity and taste.

“Salt, pepper, open flame,” he says. “That's it.” The hand- and mouth-filling burger hasn't varied much over the years: a half-pound of Angus beef, hand formed and grilled with fire. “I think it's the fat content,” Gunter says, “and that number is a closely held secret.” Tillamook cheddar from a 100-year-old Oregon farm, tomato and onion on a toasted bun, the patty craggy and charred; a real presence of beef with a good, authentic resistance to the chew—this isn't one of those mushy burgers that just surrenders. Ketchup might be considered heretical.

Neighbors from nearby Niblick Avenue and Mashie Lane often ramble in just for their favorite item. And maybe a beer or two to wash it down.

“This is a casual place,” Gunter says. “Old Orlando families, younger clientele, golfers. We're serving—to be conservative—100 to 150 burgers a day, out of a kitchen so small if you could see it you'd laugh. So that's…’’ (he takes a moment to find the calculator on his phone) about a half-million since we opened.” 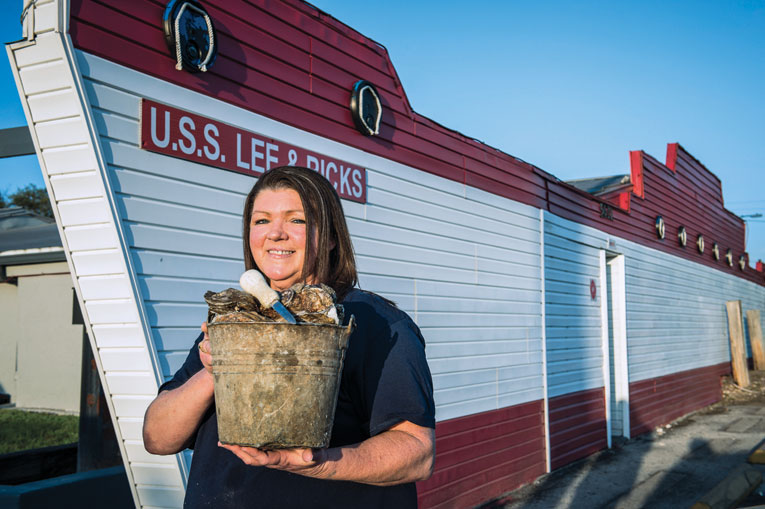 For 65 years, Lee & Rick's Oyster Bar has been the home of perhaps the oldest culinary delight in Florida. Throughout the state, prehistoric shell mounds, some 40 feet high, give evidence that ancient Floridians liked sucking down an oyster just as much as the Saturday night crowd at Lee & Rick’s, standing two deep at the bar, waiting for another bucket to be opened by the practiced forearms of a local shucker.

Marsha Williams has known this scene and these people since 1980, in her position as shucker and, for the last four years, as one of the managers.

“It hasn't changed at all here,” she says. “The customers don't want it to change.’’ (Owner Gene Richter has said that a change of paint color is enough to foment rebellion.)

Williams is on her third generation at Lee & Rick's. “Gene and Trisha (Gene’s sister) used to come in with their folks as kids.” Rick Richter, Gene's grandfather, opened the restaurant on the front porch of the wooden house on Old Winter Garden Road in 1950. “I remember Rick sitting right over there in his wheelchair, watching everything.”

Lee and Rick’s is big with tourists as well as locals. Many of the former come here straight from their flights—and it’s the last place they go before they leave.

She's spent many years since 1980 behind the concrete bar, shucking more than her share of oysters, and still pitches in when the place gets extra busy. “I'm old school,” she says. “I don't like those steel mesh gloves; your hands get all wet inside.” Instead, she uses a palm-sized piece of rubber cut from an inner tube, bracing the shellfish against the back edge of the bar. A clean, efficient twist and the shell opens—it's much harder than she makes it look.

“I can't imagine not being able to come here; we're like family.” Williams gives a wistful smile, takes some gentle ribbing from her co-workers about getting her picture taken, and then it's back behind the bar for the next round of interesting customers. 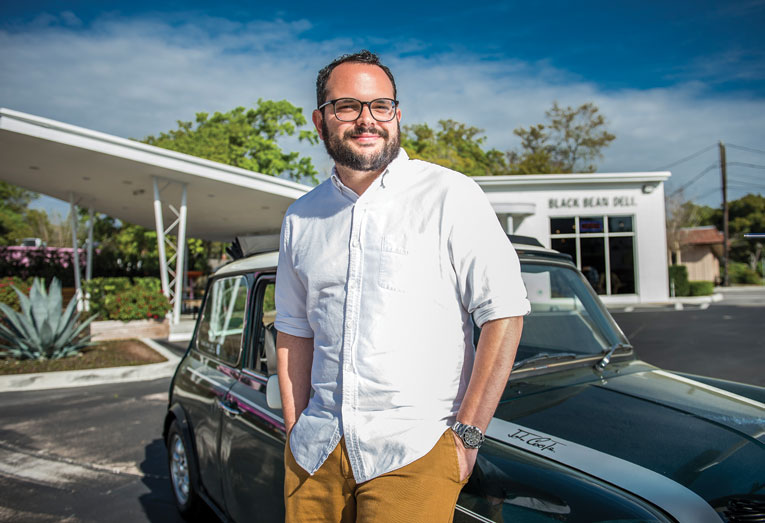 I feel responsible,” says Andres Corton, “for preserving the food of Cuba, the way of life, even this building.”

Called Andy by most, Corton is sitting in the blond wood and Spanish tile-refurbished dining room of Black Bean Deli on East Colonial Drive, the second location for his traditional urban Cuban food. The restaurant has a midcentury esthetic (a similar refurbishment of the Winter Park location was recently completed) and a deep respect for the kind of food that doesn't seem to exist any more, even in Cuba.

“I had a cousin here from Havana,” he says. “She said my empanadas were better than in Cuba—there was actually meat in them.”

Though not as pervasive an influence as in Miami, the essence of Cuban cuisine is alive in Orlando, showing up in food trucks and melded with Asian and Southwestern ingredients. But Black Bean remains at the front of a very small wave of urban Cuban restaurants.

“There doesn't seem to be a place for tradition,” the 37-year-old Corton says. “I want to keep my grandmother's kitchen.” That tradition is exemplified by the flaky and robust empanadas, abundant Spanish baked chicken platters and the finest media noche sandwich (a Cuban “middle of the night” treat of sweet ham, roast pork and Swiss cheese) to be found.

The story of Corton's parents’ journey from Cuba to America is a true immigrants' tale:  mother Maribel was a florist; father Andres drove a candy delivery truck from New Jersey to bodegas and candy stores in the rougher New York boroughs. In Orlando, they owned a diner, sold real estate and cars, and drove two food trucks, serving Grandma's recipes for 20 years—whatever it took to put Andy and his brother through college. Now, Dad is Corton's accountant, and Mom comes in every day to make flan for the restaurant.

Corton bought his first location, a tiny sandwich shop in Winter Park, 13 years ago, where the original menu said “Cuban food here, and black bean deli” in tiny letters. When he took over the former Vega's on Colonial Drive, a legendary outpost for classic Cuban sandwiches since 1976, Cordon could have razed the building and started over, but just like his vision of food, preservation was the only choice.

“Fusion is not an option,” he says. “I can't imagine watering it down.”

This article appears in the May 2015 issue of Orlando Magazine.
Categories: Culinary Spotlight, Dining Awards