Eleven great places for dining and lounging with stunning views of Central Florida.

Editor’s Note: Walt Disney World celebrates the return of Happily Ever After at Magic Kingdom and EPCOT Forever at EPCOT beginning July 1, 2021. – B.F.

Thanks to warm temperatures year-round and plenty of sunshine, Orlando offers a myriad of al fresco dining and lounge options. But there’s nothing more thrilling than taking the party to the rooftop. 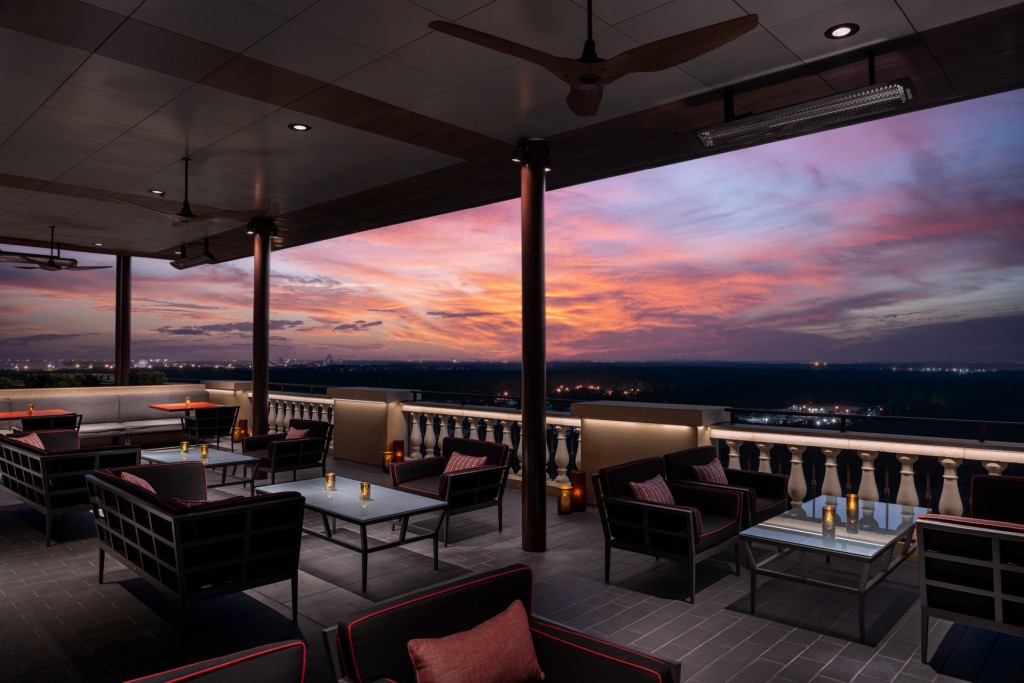 We’ve taken a tour of the city’s top spots—literally—for toasting and noshing, and we share some of our favorites. From rooftop character breakfasts and sushi to Coca-Cola floats and burritos, there’s a little something for everyone. 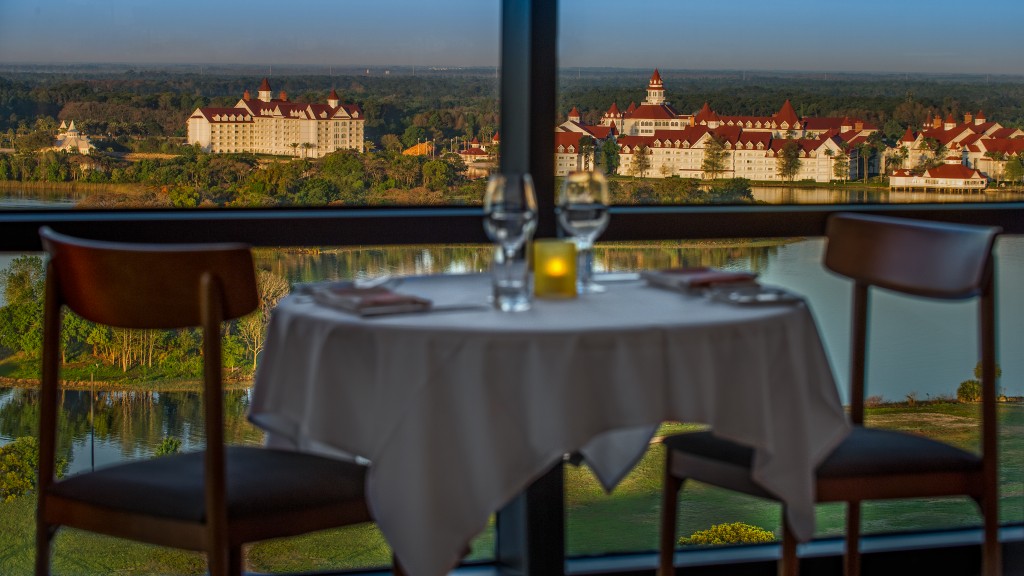 However, the menu shares the spotlight with the restaurant and lounge’s location on the resort’s 15th floor. Guests are treated to dazzling sunsets over pristine Florida wilds—as well as commanding views of Seven Seas Lagoon and Magic Kingdom. But California Grill has long been a bucket-list favorite for both visitors and locals alike for another reason: it’s the absolute best place to view Magic Kingdom fireworks outside of the park. In fact, guests who dine earlier in the evening can return with their receipts to take in the show, either from the skywalk or from the floor-to-ceiling windows within the restaurant. And through the magic of Disney, when the lights are dimmed, you’ll hear the music as the score is piped in.

Some of our perennial favorites include the Sonoma Goat Cheese Ravioli and the Oak-fired Filet of Beef, but don’t miss their ever-changing sushi options as well.

And here’s a tip: Seating in the lounge is first-come, first-served; if you happen to be at Disney and would like to stop in, you should definitely try your luck. Disney’s Contemporary Resort, 4600 World Drive, Orlando. disneyworld.com

Want to feel like you’re on vacation, if only for the evening? Then head to Capa at Four Seasons Resort Orlando. Situated on the 17th floor, the steakhouse with a Spanish flair offers moody, sexy interiors that are perfect for a special occasion—even if that’s just surviving your latest round of Zoom meetings. While the interior is a lovely place to dine, we like to head outside to one of the two outdoor terraces for tapas and a glass of wine, or perhaps a Capa GinTonic, replete with botanical and fruit flavors. 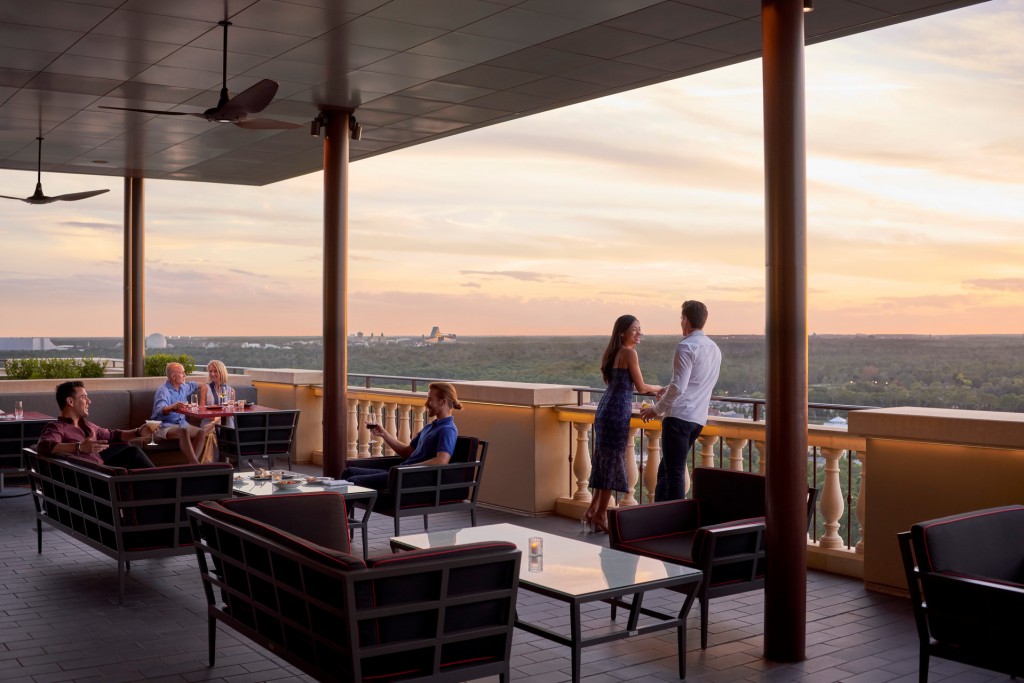 Be seated on comfortable couches with low tables, or opt for a regular table as you take in plates of raw oysters and ceviche, or an assortment of traditional tapas. (Do yourself a favor and order the Pan Con Tomate.) Stunning views of the property below and, when timed right, Magic Kingdom fireworks, provide the perfect ending to your day.

Looking for the coolest kid on the block? Head to one of Orlando’s newest resorts, the JW Marriott Bonnet Creek, to experience illume, the resort’s rooftop lounge. One of two JW Marriott properties in Orlando (the other is located at Grande Lakes), the Bonnet Creek resort is situated adjacent to Disney, making it the perfect spot for guests looking to be near the magic, but not directly in the middle of it. 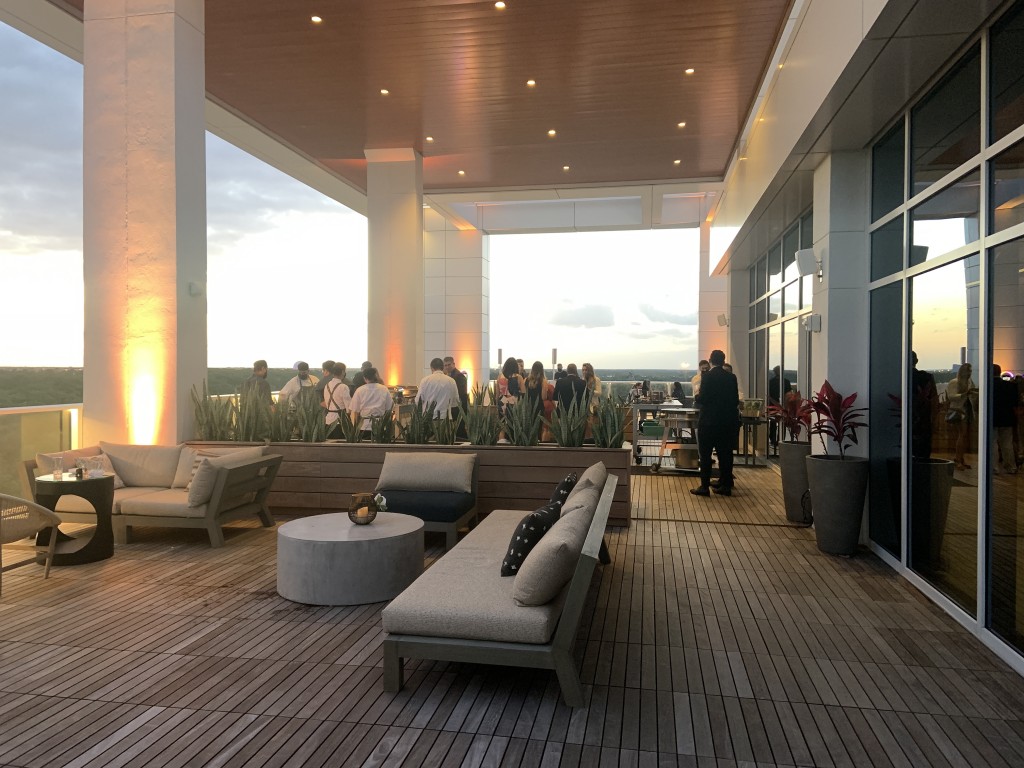 The hotel offers visitors ample opportunity to embrace the outdoors in opulence, from terrace seating at the hotel’s fine dining restaurant, Sear + Sea, to luxe patio seating within Unreserved’s Beer Garden. The sixth floor even boasts Garden Golf, a nine-hole putt-putt course. But look to the skies to experience the property’s crown jewel.

Located on the ninth floor, illume features breathtaking views of the surrounding areas with seating both inside and outside. The lounge offers craft cocktails alongside a Japanese-inspired menu, with dishes ranging from Asian-style tapas to seafood and sushi. JW Marriott Orlando Bonnet Creek Resort & Spa, 14900 Chelonia Pkwy, Orlando. marriott.com

If you haven’t had a chance to check out the recently renovated Coronado Springs Resort at Disney, now is the time. While parts of the property remain closed (including Toledo, the hotel’s rooftop dining destination), there is still plenty to explore here, including Dahlia Lounge. 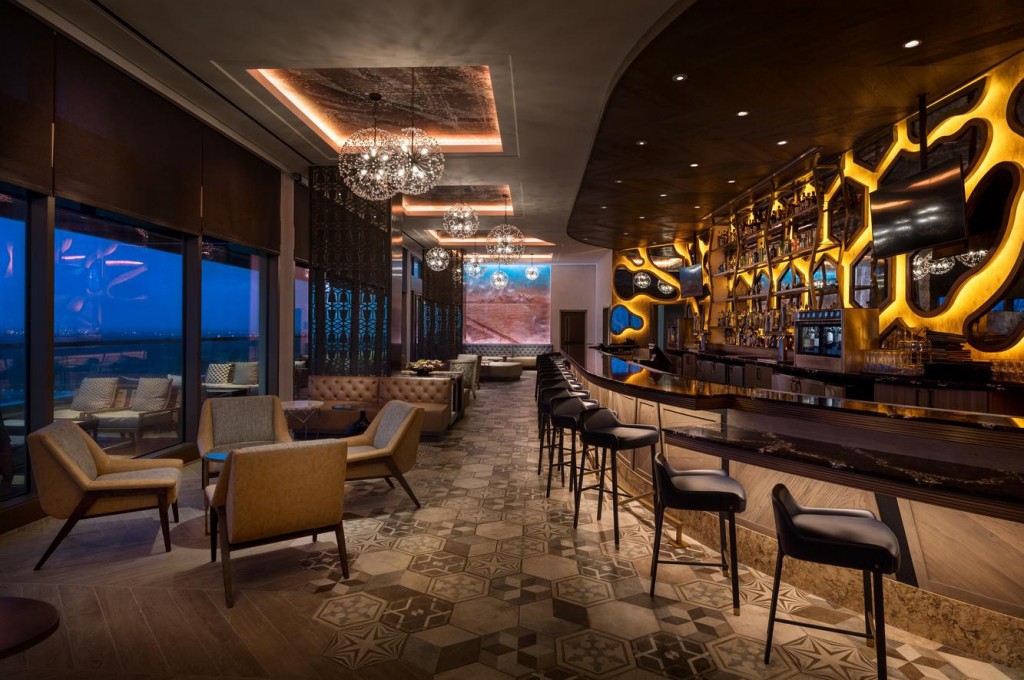 With decor inspired by Spanish surrealism, the chic space, located on Destino Tower’s 16th floor, offers a wall of photographs featuring artist Salvador Dalí and Walt Disney, who collaborated on Disney’s Destino, an animated short film featuring a heroine named—you guessed it—Dahlia. Ethereal dandelion chandeliers float above the Spanish-modern space and lead to a back wall dominated by a painting inspired by the film.

If you time it right, a visit to Dahlia will bag you views of not one, but two fireworks displays at EPCOT and Disney’s Hollywood Studios (once the nighttime spectacular show returns to Disney’s Hollywood Studios). But don’t wait until then to visit. A stellar Spanish wine list, offered in one-, three- or five-ounce pours, beckons you to try a variety of flavors. Or opt for one of our favorites, the Gran Gin Tonic featuring a house-made saffron-orange tonic and a sprig of rosemary. Traditional tapas include all of your favorites, from Croquettes to Crispy Artichokes.

Inspired by the fabled cliffside dining spots of the Italian and French Riviera, Disney recently added yet another rooftop dining experience at its latest Disney Vacation Club property, Riviera Resort. Perched on the Riviera’s 10th floor, the signature dining spot offers views of the surrounding area and provides a good option for fireworks viewing when shows resume. The outdoor terrace, available for dinner guests, features festive string lights, comfortable seating and its own bar. 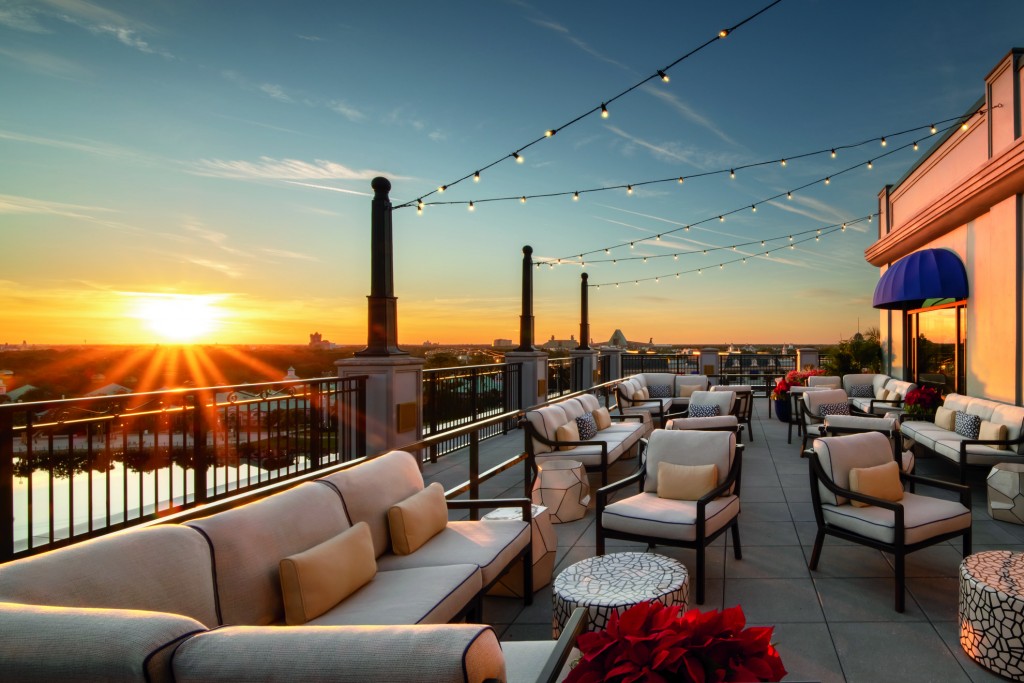 While the menu here celebrates both Italian and French flavors, Topolino’s Terrace is also notable for its character breakfast featuring pals Mickey, Minnie, Donald and Daisy. Guest interaction is currently curbed, but kids of all ages can still see characters in their Riviera Resort finest as they parade through the restaurant at regular intervals.

As for the eats, you can’t go wrong with the Quiche Gruyere or Wood-fired Butcher’s Steak at breakfast. For dinner, opt for hand-crafted pasta dishes or the classic Sole Meuniere. Disney’s Riviera Resort, 1080 Esplanade Avenue, Orlando. disneyworld.com

In pre-pandemic days, the rooftop of Paddlefish at Disney Springs, everyone’s favorite paddle boat-shaped restaurant, was a locals’ favorite for small plates paired with creative cocktails and good wine. 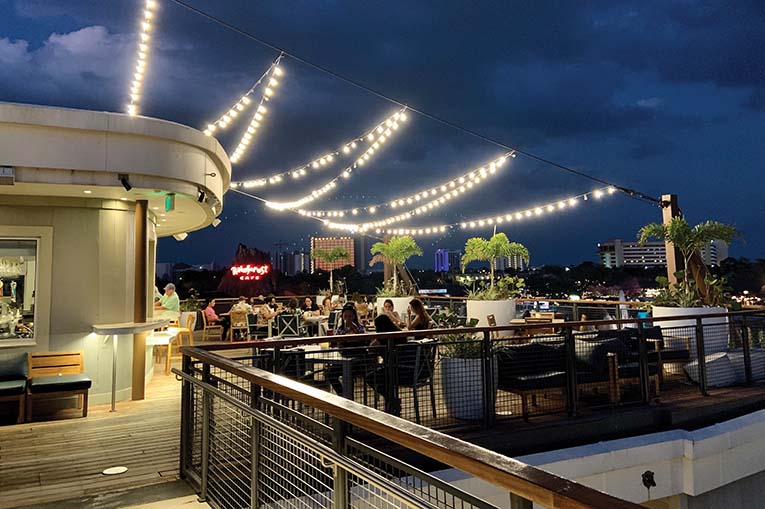 These days, and for the foreseeable future, the open-air, third-floor deck has been converted to seating for dining instead of functioning as a lounge. If you visit, request patio seating to experience blissful breezes and 360-degree views of Disney Springs and Lake Buena Vista. Indulge in Crab Cakes, Fried Green Tomatoes and Lobster Corn Dogs from the appetizer offerings, or go big with the Tableside Lobster Guacamole for Four. Explore a full array of chilled and freshly prepared seafood from the main menu. There are chicken, beef and vegetarian options as well. Disney Springs, 1670 Buena Vista Drive, Orlando. paddlefishrestaurant.com

Another Disney Springs favorite, Morimoto Asia offers diners a wide array of Pan-Asian dishes, such as sushi, ramen, dim sum and more, in a stunning space that’s won awards for its design. But while the inside of the restaurant is worth a look, we love dining on the outside terrace. 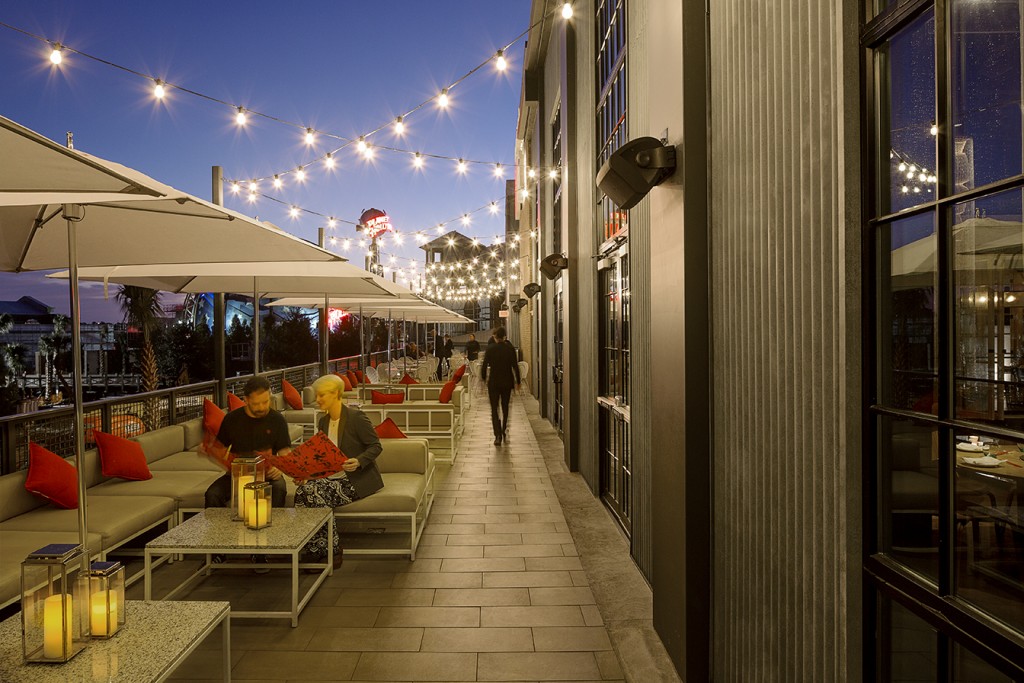 Gorgeous views of the “springs” below filtered through the treetops give guests the sense of being in the middle of it all. With its central location, this terrace is a great vantage point for people watching. Currently, terrace seating is available for dining and is offered on a first-come, first-served basis, so be sure to make your request when you check in. Disney Springs, 1600 East Buena Vista Drive, Orlando. patinagroup.com/morimoto-asia

Looking for a hip spot to meet friends for drinks? At Disney Springs, head to the top of the Coca-Cola Store to soak in the energetic, continental vibe of the Rooftop Beverage Bar. You won’t find anything to eat here (unless you count the ice cream in the floats), but the interesting offerings make up for that. 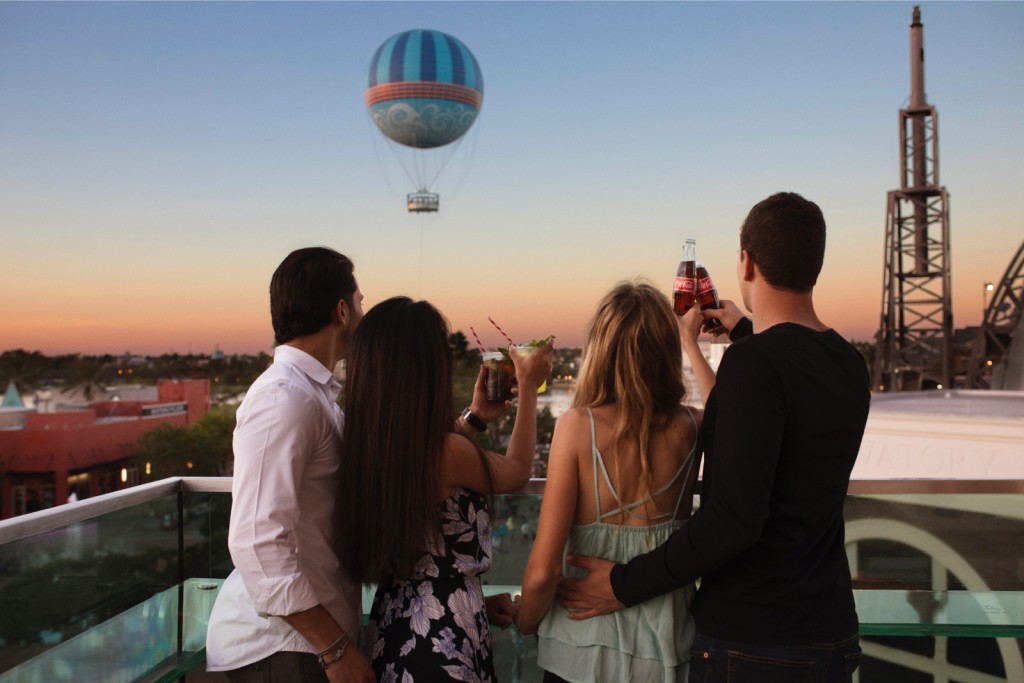 Look for trays that offer guests a chance to taste drinks from around the world. Adults can indulge in an array of cocktails that feature various sodas like Coca Cola, Fanta and more. The wraparound, glassed-in space offers panoramic views of the action at the Springs and beyond. Disney Springs, 1512 East Buena Vista Drive, Orlando. disneysprings.com

Orlando’s newest rooftop hotspot is SkyBar, located Downtown at the AC Hotel Orlando. The property occupies the top seven stories of this new high-rise situated on Garland Avenue directly across from the Amway Center (I-4 runs between the two below). An interesting space, SkyBar isn’t actually on the roof; it occupies the first floor of the hotel—which happens to be the 18th floor of the building. 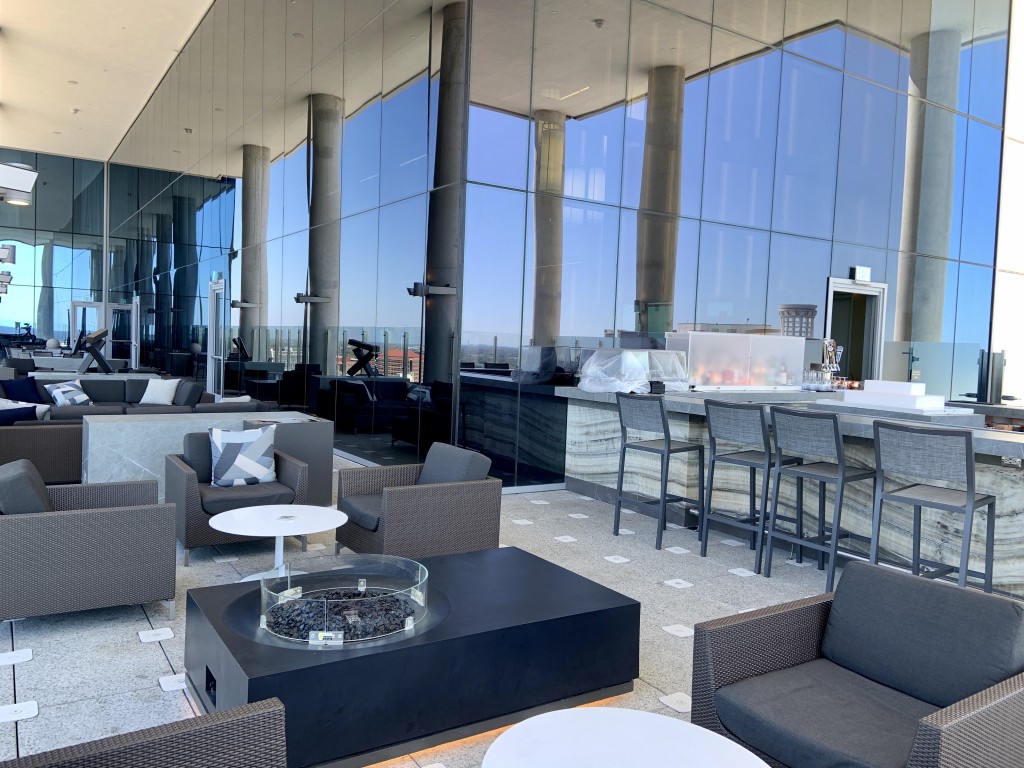 SkyBar offers views of the city and beyond (we spied the Orlando ICON Wheel during a recent visit) and is filled with comfortable chic seating dispersed among multiple fire tables. Currently, the lounge features small bites every evening and lunch five days a week. In addition, they have recently launched SkyBar Sunday Elevated Brunch, with a menu that plays off of the brand’s Spanish roots. Dishes include an Open Face Brunch Toast with Manchego cheese and La Quercia Prosciutto, as well as Creme Brulee French Toast made with the hotel’s incredible croissants. However, the can’t-miss dish is the Egg and Prosciutto Cazuela, featuring crispy, sizzling cheese, garlic aioli and a cage-free egg. Wash your feast down with bottomless Cava mimosas. AC Hotel Orlando, 333 S. Garland Ave., Orlando. marriott.com

Rooftops may be popular spots for restaurants, bars, lounges and the like, but they’re also often utilized as activity and entertainment venues. Take the rooftop pool at the Grand Bohemian, for example. The ultra-hip and stylish locale is a boon for hotel guests, with its elegant decor and lofty location. However, starting this month, the downtown hotspot will launch monthly pool parties that are open to locals the first Friday of each month. 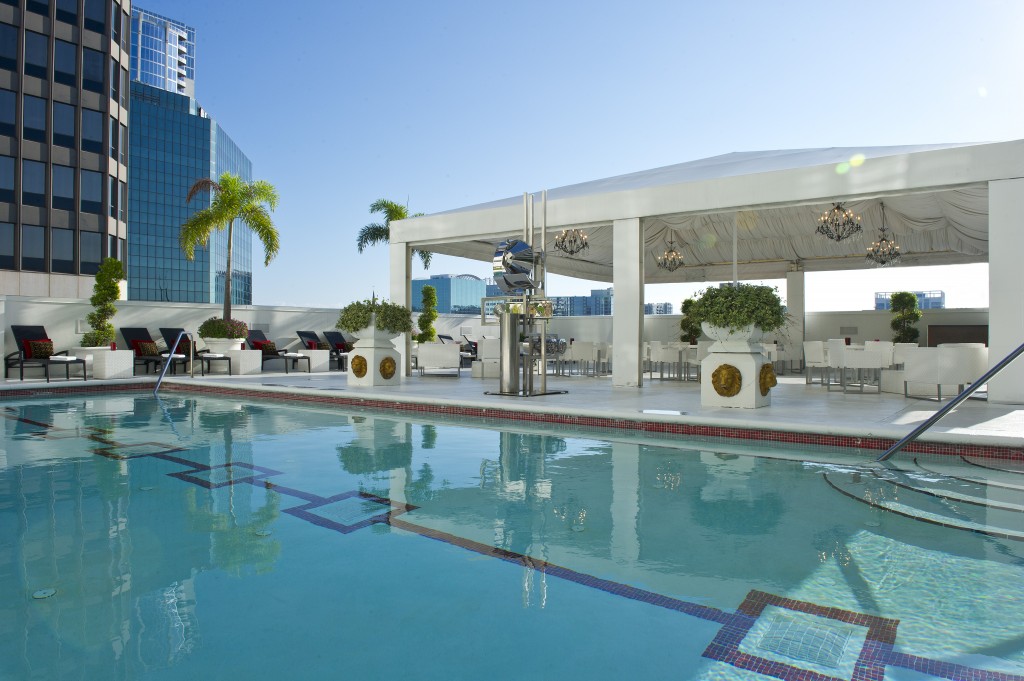 The events feature light bites and unlimited wine as well as Brazilian jazz by Gilberto Santos and his band. With stars overhead and the pool’s palm trees blowing in the evening breeze, it’s the perfect escape without ever leaving town. Look for more details on the hotel’s website. Grand Bohemian Hotel, 325 S. Orange Ave., Orlando. kesslercollection.com/bohemian-orlando

Winter Garden residents know of a hidden gem perched above Plant Street in the town’s historic district. For traditional Tex-Mex flavor and tasty margaritas, head to the Whole Enchilada. Place your order with the staff at the register, collect your number, and then search for a table. 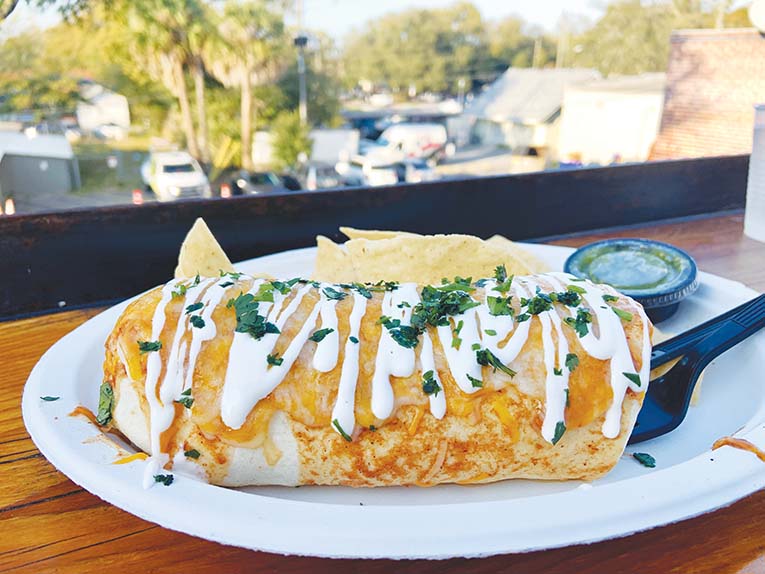 Burritos and views at the Whole Enchilada. (BROOKE FEHR)

While there’s ample open-air seating on the building’s first floor, traverse the wide stairway and head to the rooftop garden for pretty views and a funky, beach bar vibe. The family friendly space offers plenty of seating, from low couches and benches to counters overlooking the back of the property, as well as a second full-service bar. It’s the perfect place to wind down mid-week. 129 West Plant St., Winter Garden. twefreshmex.com