Head out to the water or into the air for your sun salutations. Kristen Manieri

Kristen Manieri,
Yogis looking for something new will find an abundance of options in Orlando, where several yoga studios now offer creative takes on this ancient practice. “People are less interested these days in locking themselves into one style,” says Reider Howe, an instructor at Orlando Power Yoga. “I still enjoy a ‘normal’ yoga class, but these different styles bring out different challenges. You experience new possibilities for your body, and it’s good to be taken out of your comfort zone.” 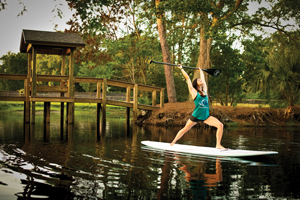 Jessica Cichra will tell you that doing your downward dogs while floating on a paddleboard has several appealing perks. “My students take this class for the added balance challenge but also to practice on water surrounded by nature,” says Cichra, owner of Wave of Wellness and the creator of SUP Bala Tula-Yoga Fusion, the 75-minute combination of yoga, paddleboarding, Pilates, Budokon, and body weight exercises she teaches on Lake Mary Jane in southeast Orlando. “The class encourages people to be brave because if they fall, they’ll just get a refreshing plunge.” $30 per class with board rental, waveofwellness.net 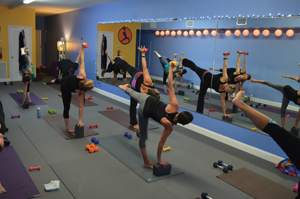 Consider Kim King Zamoff’s Boot Camp Yoga class: This exercise trifecta is part cardio, part resistance training and part yoga. The 60- and 75-minute classes are held inside the Warrior One Power Yoga Studio in Audubon Park and designed to give participants the benefits of a mind-body workout with the extra oomph of dumbbells. “You sweat a lot and feel like you’ve had an intense experience,” Zamoff says. “But you also get the focus on the breath.” Just as in a traditional yoga class, Zamoff’s class is done barefoot, which increases strength in toes and feet. “A yoga floor is better for your joints. This class can work for people who can’t normally do a high-intensity workout.” Throughout the class, Zamoff combines yoga poses with spurts of cardio, plus high repetition exercises with light weights. “People are busy. They like the idea of getting several things done at once,” she says. $12 per class, warriorpy.com

Part yoga, taekwondo, jujitsu and karate-do, Budokon Yoga is a practice with the rolling flow of martial arts. “There are points when it is a little faster than an average yoga class,” says Kelly Senn, owner of Orlando Power Yoga. “But we also incorporate long deep stretches.” Described by certified instructor Reider Howe as a more rounded workout than the average yoga experience, the one-hour class “integrates traditional yoga poses using the muscles in a much more detailed fashion,” Howe says.  “Once you get the flow down, the practice becomes easier. Until then, Budokon is like yoga; when you need to rest, you should rest.” $10-$15 per class, orlandopoweryoga.com 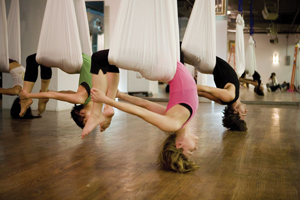 Even a novice can achieve graceful practice during Aerial Yoga, traditional yoga done while hanging from soft fabric used by circus aerialists. Twelve cloth slings are suspended from the ceiling inside the Yoga Girls Orlando studio, where several women-only and coed classes are taught each week. Also known as Hammock Yoga, the class allows for longer inverted poses while the sling evenly distributes body weight and safely suspends students in the air. “It’s a really playful practice,” says instructor Amanda Bouque, who finds that the sling allows participants to access traditional yoga postures in new ways. “You hear a lot of laughter during the class.” In fact, participants are practically giddy at the class’s finale when they cocoon themselves for a suspended—and completely relaxing—Shavasana. First class $9, yogagirlsorlando.com

This article appears in the December 2013 issue of Orlando Magazine.
Categories: Health & Beauty