What You Should Know About Multiple Sclerosis

Learn how AdventHealth is treating multiple sclerosis with top-level care.

Multiple sclerosis (MS) is a chronic disease of the central nervous system that disrupts the flow of information within the brain, and between the brain and body. AdventHealth neurologist Ryan Mizell, MD, explains what you should know about this serious disease and its treatment.

With MS, an immune-mediated process happens where an abnormal response of the body’s immune system is directed against the central nervous system. However, the specific cause is not known. Scientists believe MS is triggered by a combination of factors, including a person’s environment, genetics, immunology and infections. There are three basic disease courses of MS, depending on the frequency of episodes. These include relapsing-remitting MS (RRMS), primary progressive MS (PPMS) and secondary progressive MS (SPMS).

Who gets multiple sclerosis?

Nearly one million people in the U.S. are currently living with MS. Up to three times as many women develop the disease compared to men. And, while MS is not contagious or directly inherited, about 15 percent of MS sufferers have one or more family members with MS.

What are some symptoms and treatment options?

Symptoms of MS occur due to damage to the central nervous system, including the brain, spinal cord and optic nerves. These symptoms may vary from person to person but most commonly they include fatigue, pain with eye movement and changes in vision in one eye, or double vision, weakness of an arm or leg, loss of sensation, poor coordination, imbalance, pain, depression and memory and concentration problems.

MS cannot be cured, but it can be treated. There are now FDA-approved medications that have been shown to modify the course of MS by limiting new areas of damage in the central nervous system, reducing the number of relapses and delaying progression of disability. Treatments include: 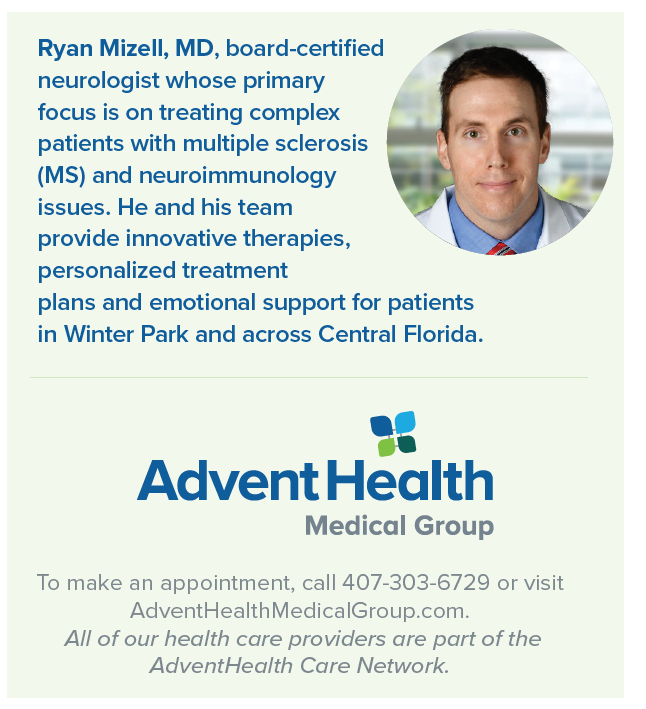 AdventHealth Health Hub: Get Your Immunizations