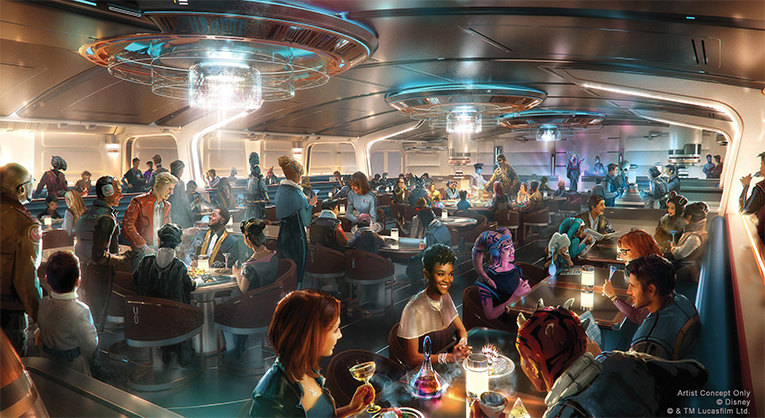 At Walt Disney World, Star Wars enthusiasts are over the moons of Endor with the maiden voyage of the Galactic Starcruiser, an immersive two-night experience that lets guests create their very own Star Wars story.

During your adventure, you’ll not only hobnob with Star Wars characters, but they’ll lead you to different exciting interactions. After lightsaber training and a chance to review the ship’s systems, you may wish to board a transport for a trip to the Black Spire Outpost on Batuu, go on a smuggler’s run or hide a stowaway to help the Resistance. Each choice you make leads to more plot twists and adventures.

Every voyage includes a two-night stay in a cabin or suite; prices vary according the number of guests. Watch as the Star Wars cosmos flies by outside your window: You’ll spy ships, planets and stars floating past. Meals are served in the grand Crown of Corellia dining room; the first night, it turns into a supper club with a special musical appearance by a galactic superstar. The second night, the Taste Around the Galaxy features courses inspired by the geography and environments of the galaxy’s iconic destinations.

And when you feel the need to let loose, head for the Sublight Lounge and kick back with the galaxy’s best cocktails.