Going part-time veg is far more popular than you might think.

Meat is so five years ago. Since 2007, meat consumption in the U.S. has declined by 12 percent, says the Department of Agriculture, with an estimated 30 million Americans joining the “less meat’’ revolution. That has spawned a third option for those who find vegetarianism and veganism too restrictive.

It’s called semi-vegetarianism, a movement that has several interpretations. There are flexitarians, who primarily eat a plant-based diet but occasionally indulge in meat for the sake of protein and iron; then there are pescetarians, who don’t eat poultry or red meat, but consume seafood for the benefit of fish oils, which are high in Omega-3 fatty acids. Both lifestyles are also stepping-stones toward more veggie-exclusive diets.

Regardless of the label, the semi-vegetarianism trend signals a growing consciousness of health and environmental issues. People nationwide are looking for a compromise to the all-or-nothing approach that strict vegetarianism offers.

Katya Galbis, a licensed dietician in Longwood, likes what she’s seeing. “We are eating too many animal products and they really are causing a lot of illness. But it’s hard for some people to think of a diet without meat,” she says. “The flexitarian diet can help people discover that vegetarianism isn’t really that hard. In fact, it’s a great way to slowly start learning how to replace meat protein with vegetable protein and reduce your reliance on meals centered around meat.”

Meatless Monday (meatlessmonday.com), a national initiative helping consumers reduce their meat consumption by 15 percent, has been a strong advocate of this partway approach. According to the organization, if every American lowered meat consumption by that amount, greenhouse gases would decrease as much as if we all started driving hybrid cars. Holy cow—pun intended.
Galbis suggests making small changes in meals you already make, such as swapping out the meat for beans on burrito night or loading up lasagna with veggies instead of beef. “Add quinoa where you can, legumes, nuts and seeds, and try tofu instead of chicken with your stir-fry.”

Even if you can’t embace flexitarianism whole-heartedly just yet, an increase in your veggie intake and a decrease in meaty meals will have benefits. The trend is quickly becoming less of a fad and more of a way of life, so much so that even the staunchest of carnivores need to face facts—bean is the new beef.

Need inspiration for meatless meals? Snag a great meal and some ideas from these area eateries where veggies rule the menu.

Ethos Vegan Kitchen
Off Fairbanks Avenue in Winter Park, this hipster hub whips up favorites like club sandwiches and Sunday morning pancakes without any meat, dairy or eggs.
www.ethosvegankitchen.com

Café 118°
Not only does Winter Park’s Café 118° craft its entire menu without meat or dairy, the fare is also entirely raw and organic, hence the name. Nothing is heated beyond 118 degrees.
www.cafe118.com

The Loving Hut
This East Colonial Drive eatery features a 100 percent vegan menu of mostly Asian fare. Rumor has it the staff meditates two hours each day to make sure each dish is infused with pure love. www.lovinghut.us/florida

This article appears in the January 2013 issue of Orlando Magazine.
Categories: Health & Beauty
Want to read the whole issue? Download and read this issue and others on Magzter.

Real Workouts in the Virtual World 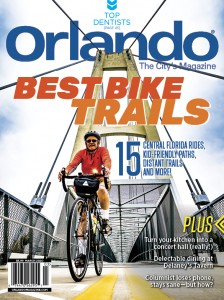 Orlando Grocery Stores: What You Need To Know