Visitors might be surprised to find some of the best restaurants in the country are actually in and around Orlando's theme parks.

Even though the incidence of giant smoked turkey legs has decreased, people don’t generally associate dining at theme parks with tablecloths and table service. For those who crave such a thing—fish tacos at Margaritaville, chicken nuggets galore at every Disney park—the (pardon the expression) bulk of restaurants at Disney and Universal remains fast and extremely casual. But in and around the theme parks, there are actually some truly stunning dining options from around the world, including a few of the best restaurants you'll find anywhere. 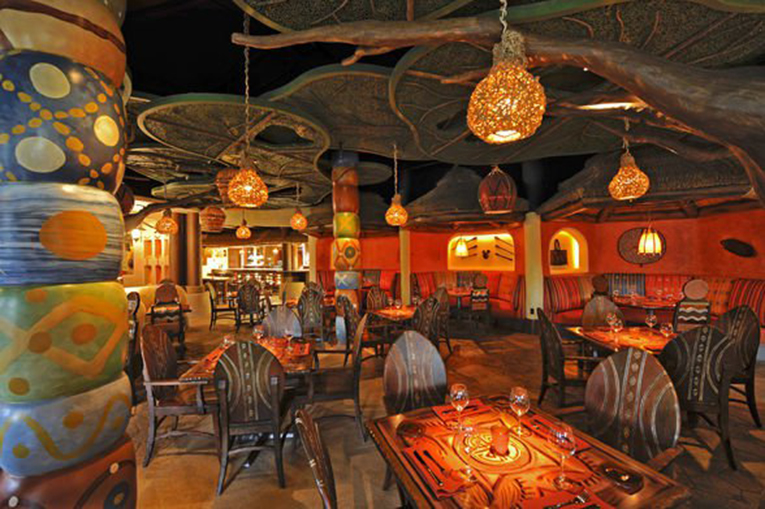 Indian and African flavors come alive at Sanaa, as zebras and giraffes roam just outside the windows. (©Walt Disney World)

Not surprisingly, the variety of tastes and influences that make up African cooking can be found at the restaurants of the Animal Kingdom resort. Jiko–The Cooking Place, in the Jambo Lodge, specializes in African and sub-continent spices; start with the Taste of Africa dips and warm bread, and wrap up with Ghanaian chocolate and Kenyan coffee pot de crème. Across the hall is Boma – Flavors of Africa, a bountiful buffet that pleases just about everyone. Sanaa, in the Kidani Village, is a cozy space, with 9-foot-tall windows that look out on the resort’s animal-filled savanna and features African specialties with Indian inspirations. 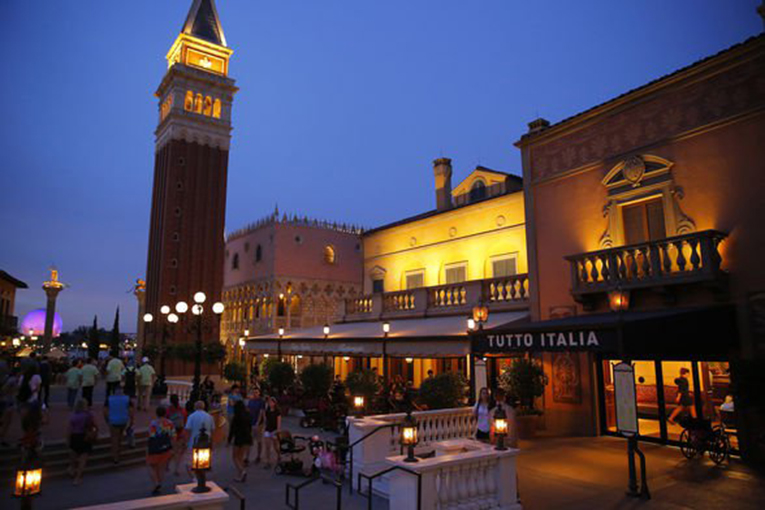 Tutto Italia Ristorante feels like a big restaurant in Rome or Milan, just transplanted to Epcot's Italy Pavilion, and one of Epcot's best. If you can't get a seat, the wine cellar next door offers many of the same menu selections in an intimate atmosphere. 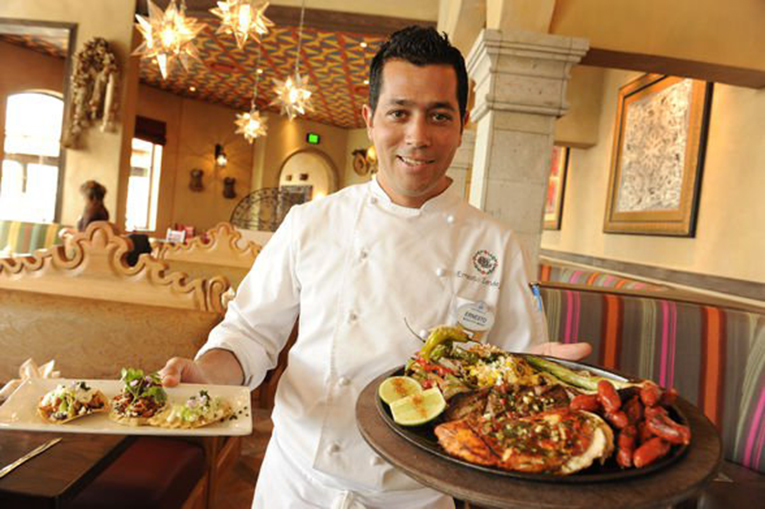 Epcot excels in Mexican cuisine. The San Angel Inn, set inside an Aztec pyramid, overlooks a starry sky and the Gran Fiesta Tour boat ride. The menu goes beyond the typical tacos and such, offering special and regional dishes that are difficult to find in the United States. Outside on the lagoon, La Hacienda de San Angel is a primo spot for watching fireworks through the tall windows while enjoying pork confit carnitas; the taco sampler with pork, beef, battered fish and chicken; short ribs with chimichurri, fried-shrimp tacos and acres of margaritas. 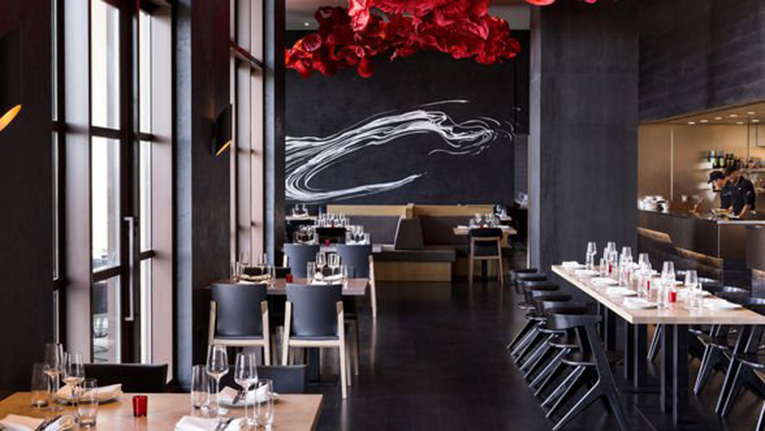 Head to the 17th floor of the Four Seasons Resort for an award-winning combination of atmosphere and food at Capa, a Spanish-styled steakhouse that des everything right, from tapas to cocktails. 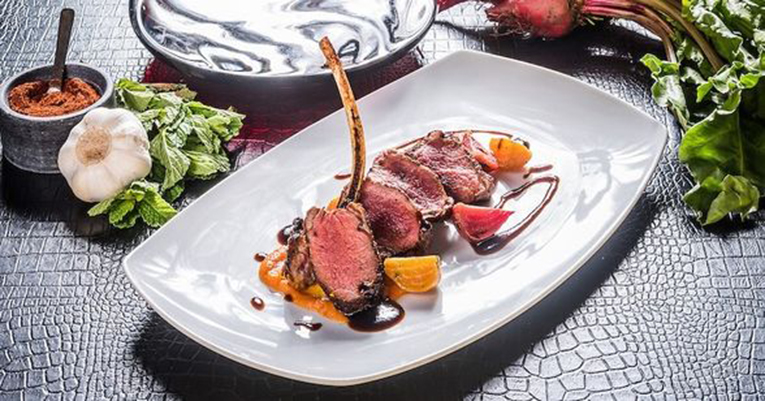 Disney's resort hotels are home to some of the finest dining in the country, let alone Orlando. One of Walt Disney World’s top dining experiences, California Grill on the 15th floor of the Contemporary Resort offers spectacular nighttime fireworks views and even more splendid Californian hand-crafted cuisine.

Victoria & Albert's, in the Grand Floridian Resort, has been awarded AAA’s Five Diamond Award for 16 straight years, and it is an E-ticket culinary ride of the highest caliber. Very expensive tables are booked six months in advance, and for epicures, it's a bargain. Down the Grand Floridian's Victorian walkway to the edge of Seven Seas Lagoon, Narcoossee’s is a more casual option if you couldn't book that V&A seat, but still an impressive way to experience fine dining. Artist Point, a beautiful room in the stunning Wilderness Lodge resort, takes inspiration from Yellowstone National Park and serves splendid fish from the Pacific Northwest.

But you don't have to leave the parks. The Hollywood Brown Derby is an oasis of civility in the middle of Disney’s Hollywood Studios, recreating the grand style and tastes of Old Hollywood. At Epcot's Canada Pavilion, Le Cellier Steakhouse evokes the look and feel of a wine cellar, one serving fine steaks and authentic poutine.

At Universal Studios, San Francisco seafood treats abound at the casually elegant Lombard’s Seafood Grille, while Mythos at Islands of Adventure, with a mostly Mediterranean menu, is one of the most magical dining rooms anywhere, carved out of the very rock of a cavernous grotto. At the nearby Hard Rock Hotel, fine cuts of prime beef and a New York steakhouse atmosphere is served at The Palm.

And the new epicenter of dining, Disney Springs, features STK, a "modern steakhouse and chic lounge", bringing Vegas/Miami sexy to the Orlando dining scene with an outdoor patio and reimagined American steakhouse cuisine. 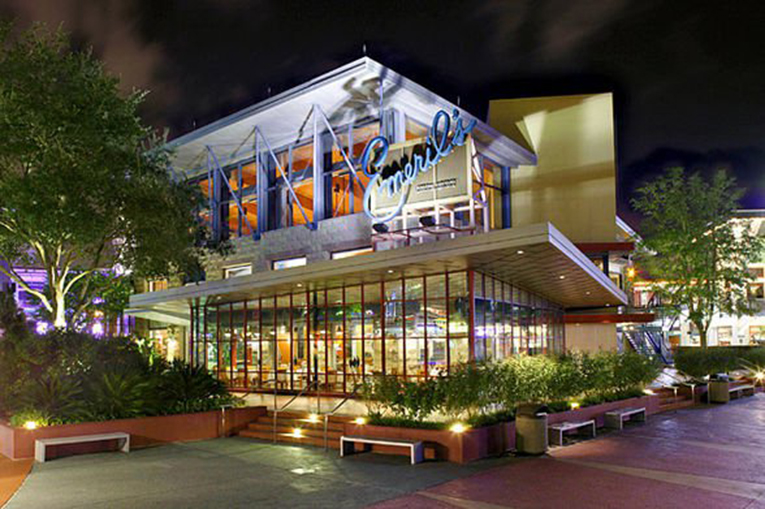 Emeril Lagasse brings a taste of New Orleans to CityWalk at this elegant restaurant. (©Emeril's Orlando)

Seven of the Orlando area's top chefs have been nominated as James Beard Award semi-finalists, but you might not recognize their names—yet. However, Orlando is alive with celebrity chefs you will know.

California's own Wolfgang Puck has a four-in-one location at Disney Springs West Side in the form of his Grand Café, which offers an open kitchen spotlighting his famous wood-fired pizzas, a much more formal Dining Room upstairs, the very casual Express for "grab and go" delights, and a sushi bar.

A short walk from Wolfgang's is the Celtic delights of Kevin Dundon's Raglan Road Irish Pub, transplanted direct from Dublin with great fish and chips as well as Dundon's inventive interpretations of classic Irish dishes. Directly across the path, seekers of ultra-hip pan-Asian cuisine such as Indonesian goring, Korean buri-bop and Singapore laksa, and some of the best sushi in town, can find it at Morimoto Asia, helmed (when he's in town) by the Iron Chef himself.

Fine dining is represented by one of the founders of celebrity chef-dom, Emeril Lagasse, who epitomizes the new face of New Orleans at the best restaurant in CityWalk at his namesake Emeril's with Louisiana-style food with a creative flair. And unique takes on Asian cookery can be found at his Tchoup Chop at the nearby Royal Pacific Resort.

The rebuild of Downtown Disney into Disney Springs is offering an almost countless stream of new premium restaurants. The perennial Fulton's Crab House will now be called Paddlefish after a massive renovation; The Edison, a lavish “Industrial Gothic”-style restaurant, bar and nighttime destination is on the way, as is a newly observatory-themed Planet Hollywood.