Here’s some advice on navigating the finer-dining scene with children—along with who’s putting out the welcome mat.

Anyone with small kids, or anyone seated near them, knows that dining out with children is fraught with potential calamities. Of course, Orlando has scores of kid-friendly options where rainforests and dinosaurs, princesses and pirates create a “let kids be kids” setting that often pardons poor behavior and the inevitable spill, shriek or cataclysmic meltdown. But must families be exiled to such places?

Take heart, Mom and Dad: After much research, it seems Victoria & Albert’s is the only Orlando-area restaurant that has an 11-and-up policy when it comes to budding diners. But while dining out with the kids may be fair game everywhere else, there’s still a lot to consider.

“If you’re going to a restaurant, the first critical piece with a three-, four- or five-year-old is to not expect to have an appetizer, then a salad, an entrée and dessert,” says Judith Levine, a faculty member and undergraduate program coordinator for the Early Childhood Development and Education Program at the University of Central Florida. “That is simply an expectation that doesn’t match them developmentally.”

Adults and children have two entirely different motives when it comes to eating, Levine says. “Meals are social for adults. We do it to relax and connect. For kids, it’s about eating and then getting on with life.”

For that reason, Kari Bell steers clear of Orlando’s “nicer” restaurants when dining with her two boys, ages 2½ and 5. “If I’m going to a nice restaurant to spend the money to enjoy food created by a chef and a bottle of wine, we go on our own,” the Winter Garden mom says. “The biggest reason is that these are not places kids are going to enjoy going to. I’d rather take them to Chili’s where they have the balloon guy.” 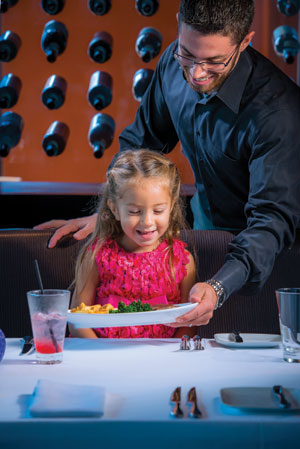 Conversely, Michelle Phillips and her husband will take their 4-year-old daughter, Alexa, just about anywhere. “We started when she was an infant at places like Fleming’s and Ruth’s Chris,” says Phillips, who lives in southwest Orlando. “But the key is that you have to engage with your kids. You can’t expect just to sit and have a quiet meal with your husband. Now we always have stickers, coloring books and table games. You have to cater to them,” she says.

Levine agrees and suggests having a bag filled with things kids only get to have when they eat out. “When you are with your children, you don’t get that relaxing dinner out anymore. If you deserve a lovely meal out, don’t take your child with you. It’s no more appropriate than taking them to an R-rated movie.”

She also suggests being ready to pack it in if things go awry. “If a parent makes the choice to take their child to a restaurant, then they are responsible for that child but also everyone else in that restaurant,” Levine says. “You need to know that there might be a point in the meal when you may need them to wrap it up quickly.”

Dannie Fowler, who teaches dining etiquette classes to kids and adults via her company, The Etiquette School of Florida, echoes this point: “It’s not okay to ruin someone’s else night,” she says. “You box up your food and you go home. It’s a selfish thing to stay and you’re not enjoying your meal anyway.”

Fowler suggests setting yourself up for success by eating early, feeding a hungry child a few snacks on the way and keeping the meal to 60 minutes or less. “Start with fast food and then move on to Outback. If they can control themselves there, then you’re ready for the next step.”

It turns out that children aren’t nearly as excited about food as we adults are. “It’s just a means to an end for them,” Levine says.

But even with their lack of epicurean enthusiasm, Levine doesn’t suggest constantly offering kids chicken nuggets and macaroni and cheese. “We dumb down food for children and we should not,” she says. “Their palates need to be exposed to different tastes.”

Kathleen Blake, chef and owner of The Rusty Spoon and mother of four, concurs. “It’s so easy to appeal to the masses, but we need to think beyond the $2 kids menus. Kids will never learn to eat something if we don’t give them the opportunity to try it,” says Blake, who suggests ordering family-style so everyone has a chance to sample several things.

While Blake doesn’t offer a kids menu at her downtown restaurant, it doesn’t mean that the kitchen is not accommodating. “We can do pasta and meatballs, steak and frites. We’ll chop a Caesar salad for them. And we do a crudités plate with a yogurt dipping sauce,” Blake says.

Brandon McGlamery, chef and owner of Luma on Park and Prato, is equally accommodating at both of his Winter Park restaurants. “I think the parents here want to encourage their kids to go outside the box a little,” he says. “But if they ask us to do a grilled cheese, we can do it. We can easily adapt to the situation.”

While opinions differ wildly from gratitude to total disgust, the alarming prevalence of smartphones and tablets in restaurants as mechanisms for child distraction is not debatable. They are everywhere. “I am not an anti-technology person,” says Levine. “But we’re teaching children that watching a movie or playing a video game is appropriate restaurant behavior, and it’s not. Meals are social. We need to be teaching that and modeling that.”

“Ninety percent have some sort of handheld device or tablet,” says Blake of her young diners. “I don’t judge. Maybe they’ve had a really long day. But parents wonder why they can’t take their kids anywhere. If they don’t put them in the situation to learn, they will always expect to be entertained.”

The overarching consensus from chefs and researchers alike is know thy child, as in be an honest judge as to how he or she is potentially going to behave, and choose the restaurant accordingly. “We all know our own kids and what they are capable of,” says Fowler. “There are 3-year-olds with great manners and 10-year-olds with atrocious manners. But on average, most kids are ready for a fine dining experience around second grade.” 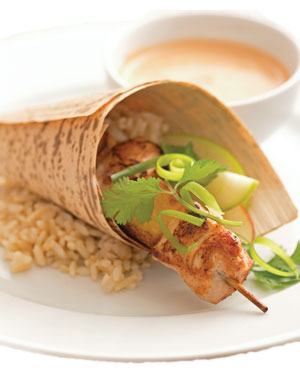 Three cheers to these restaurants for fearlessly veering from the well-worn path of chicken fingers and mac and cheese with their exceptional kids menu offerings:

This article appears in the August 2015 issue of Orlando Magazine.
Categories: Culinary Spotlight