Toyland on the Trail

Neighbors include a closed thrift store, a porta-potty storage lot and, across the street, the Parliament House, Orlando’s central gay nightspot and resort. But TMJ Toys, located in what used to be an old air conditioning repair shop, with huge windows on three sides up front, seems to fit in this industrial edge of North Orange Blossom Trail.

It was those windows that sold Colin Bentham on the little building, when he decided to move his business from Melbourne to Orlando. “The glass was amazing,” he says. “I knew it would show off the toys.”

TMJ Toys—named, he says, for the initials of his three childrens’ names (Tiffany, Michael and Jamal), and not the dental diagnosis of temporomandibular joint disorder—is packed, absolutely packed, with new and used toys. Lamborghini models are stacked next to Barbie dolls. A flexible plastic A-Team van sits atop a ship in a bottle. There’s no central theme, no Dewey Decimal System to sort it out. Only Bentham knows where every toy is at, stacked amid hundreds of toys of all kinds, from cars to airplanes to dolls to Star Wars and GI Joe items.

It’s all part of a lifelong hobby, turned obsession, turned career for the 56-year-old native of Barbados who speaks with a deep voice and an island accent that sounds as though he’s about to do an “Un-Cola” commercial for 7-Up. He loved toys as a child, but it was during his stint in the U.S. Navy that he really became a collector: “Everywhere we’d go, I’d take a taxi and look for collectible toys,” he says. It didn’t hurt that his base commander was a model-building fan, like Bentham “and he gave me a lot of liberty. And that blossomed into 36 years of building and collecting.”

Bentham began selling toys when he was living in New York, and the collection took over his basement. When he moved to Florida, it became too expensive to keep it in storage. So he began selling toys and collectibles 11 years ago, and he’s been at this location, 435 N. Orange Blossom Trail, for a little over a year.

It is not the sort of area where you would expect to find retail stores, much less go there to shop. “Three times in the first two months, the police came in and asked me for paperwork showing I was the owner. I was starting to get annoyed. I know this is a high-crime area, but I hope that by staying here it will help begin to change the neighborhood, even if it is just one business at a time,” he says. “People warned me that it was a vicious neighborhood, that I’d get broken into at night, but praise the Lord, it hasn’t happened.”

Bentham’s prime retail outlet is online, including eBay, where he specializes in automotive toys. His current listings have toys starting at under $10, topping out with a handmade, one-of-50-built Plymouth Barracuda model for $172. At his retail store, he also repairs bicycles and restores those electric “Power Wheels” toy cars, “which I do for people who can’t afford to go to Walmart and pay $300 for a new one.”

Nothing in the store has a price tag: If you want to know what it costs, just ask. He buys toys at toy shows, estate sales, auctions, and sometimes, people just bring stuff in to sell.

You would think that, at home, Bentham has a selection of his own collectibles that he isn’t willing to sell. You’d be wrong. “Some things I held on to thinking my kids might want them, but if it isn’t PlayStation 3 or Game Boy-related, they’d rather not be bothered. I’d prefer to pass it all along to people who want it and will appreciate it.”

Colin Bentham says the following are some of the great finds in his TMJ Toys store: 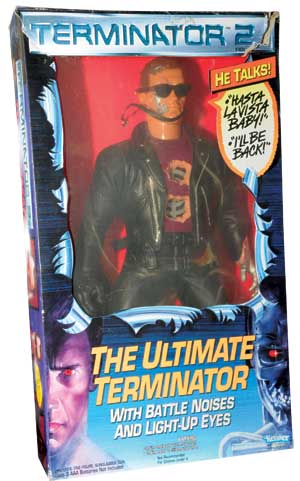 Terminator 2  doll, with “battle noises” and “light-up eyes” and says, of course, “Hasta la vista, baby!”: “That’s more of a collectible than a toy—after 10 years, toys generally become collectible. The box isn’t in the best condition. $15.” 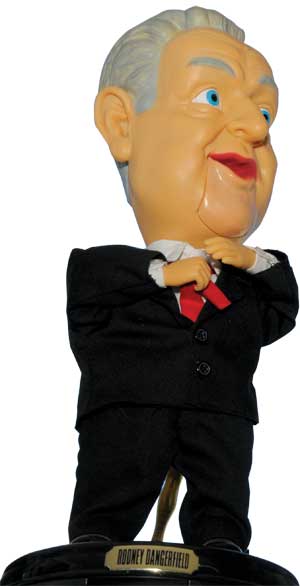 18-inch Rodney Dangerfield action figure, says “I don’t get no respect!”: “That’s about seven years old. The company made similar models of celebrities, including Bill Clinton and Louis Armstrong, and they all operate about the same way. $25.”

This article appears in the March 2012 issue of Orlando Magazine.
Categories: Community