A treasured house built in 1928 becomes a comfortable, classic-modern jewel. 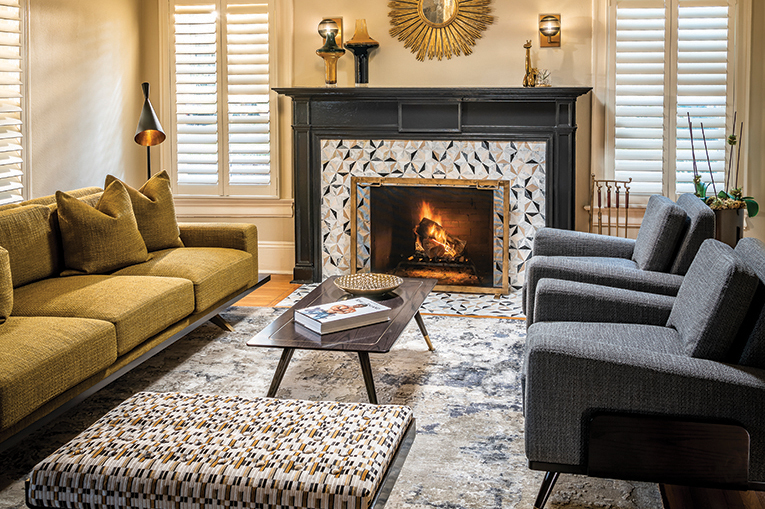 Delaney Park is a cozy neighborhood, where brick-lined streets meander around parks and lakes and duck-crossing signs warn motorists of two-legged, feathered residents. It’s the kind of Orlando haven that one could easily fall in love with—that’s what happened to Greg Atchley and Charlie Comiskey. And that’s why they bought a two-story Craftsman house built in 1928 and set out to transform it while keeping its good bones.

​“We lived in Delaney Park two years ago. We decided to come back and got lucky that our previous neighbor, who lived here for over 20 years, was getting ready to sell her house. We found out about it before it went on the market and bought it,” says Atchley.

​The couple appreciated the traditional elements of the house that had been preserved, such as the staircase and wood floors in the living and dining rooms. However, their style leaned more toward a sleek and sophisticated modern design. The question was: How would that style fit in a more traditional home? 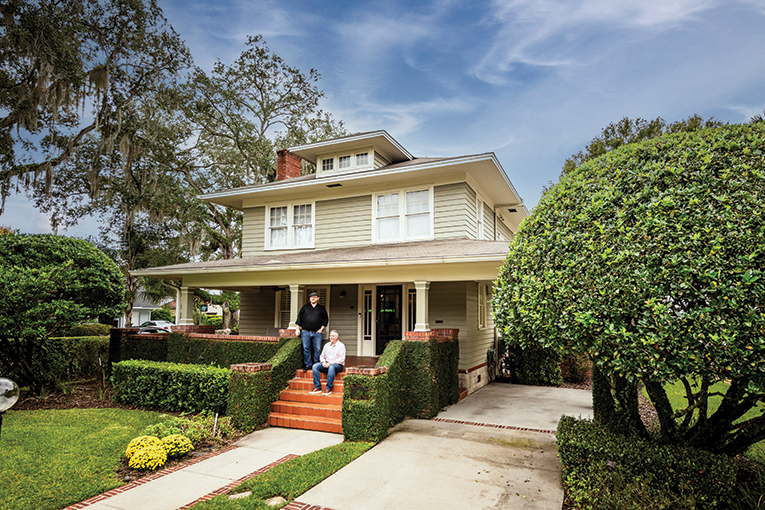 ​When it came to choosing an interior designer, Atchley says, they knew who they wanted. “We’ve always been fans of Ted Maines. His style, his art collection, the way he puts things together just made sense to us,” he says. Although they had seen Maines’ ultra-sleek design in condos, they weren’t convinced he could blend the traditional elements of their classic home with modern style. Once Maines showed them examples of his work doing exactly that, they were on board.

​When the interior designer began working with Atchley and Comiskey, Maines realized that the two men had a great sense of style, and that they had a passion for design. “I felt that they were a little more sophisticated, a little more savvy than a lot of people who are looking to do a renovation, and I wanted to do something that would capture those parts of their personalities. They travel a lot and are very into entertaining, fine dining, cocktails, wine, having friends over,” says Maines, president and principal of Ted Maines Interiors in Winter Park.

​Maines and his team wanted to embrace the unique architecture and original details of the home while creating an environment that would accommodate Atchley and Comiskey’s lifestyle and still be a comfortable home.

​“We’re known for doing modern. Classic-modern is our niche,” says Maines. “My goal with this house was to capture more of an international style. There are elements of their home that could be very European.”​ 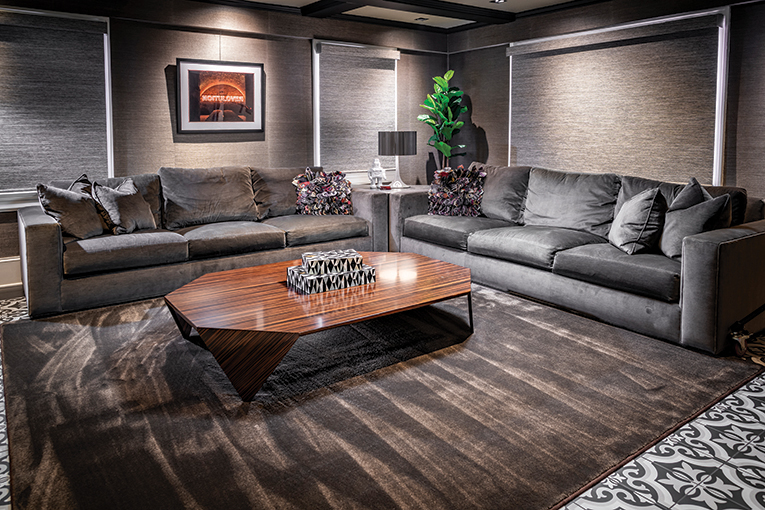 From the front porch, the first room a visitor enters is the living room. It serves as a welcoming, transitional space. The eye is drawn to the original fireplace, which was updated with tiles placed in a striking mosaic pattern. Maines chose gold and black tiles that paired well with the geometric-patterned fabric of the room’s ottoman. He brought in a gold mustard-colored sofa and two gray chairs in a bouclé that he compares to the fabric of a classic Chanel suit. “These pieces definitely have that European vibe,” he says. “To me, it has a Parisian feel.”

To give the room a clean look, Maines opted for plantation shutters rather than draperies. “We thought the plantation shutters would be effective as you have privacy and can open them for light, without adding a lot of clutter and fabric to the walls,” he explains.

Maines also wanted to create a flexible ambience in the living room through lighting and so installed sconces trimmed in gold tones. Dimming them sets the perfect mood for entertaining, but the sconces could also be used as strategic lighting for artwork as the homeowners build their collection. The room’s finishing touches are a structured chandelier and a mirrored sunburst over the mantel.

From the living room, guests walk into the dining area and its adjacent open kitchen, both of which are sandwiched between the living room and the TV room. Maines intentionally created an open area, or what he calls “negative space,” for people to gather and move around, rather than filling the room with furniture. “People will stand up, mingle, get cocktails, have hors d’oeuvres and dinner. The whole socializing thing is not always done with people sitting. We wanted to have great places where they could sit, but we also wanted to leave room for them to stand,” he says. 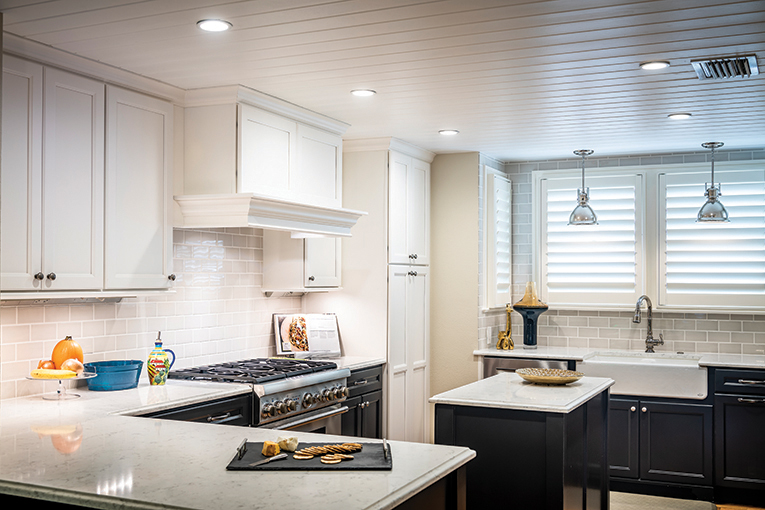 For entertaining, the area had to be user- friendly. A banquette is tucked against a set of bay windows. Here, a round, custom-made table fits neatly with three chairs upholstered in a soft teal and chartreuse velvet.

On the wall, artwork by Brazilian-born artist Rubem Robierb is on display. Atchley and Comiskey found the provocative piece in a New York gallery. “It’s Greener Because It’s Fake” is written out in green neon against a wood panel of synthetic grass. Atchley explains that when they moved away from Delaney Park, they missed the neighborhood. For them, the artwork serves as a reminder that it’s not always greener on the other side.

When it came to the home’s period kitchen, little work was needed because it had been renovated a couple of years prior. Maines decided to keep it neutral, painting the bottom cabinets black to accentuate the white marble countertops and beadboard ceiling, giving it a crisp refresh.

In contrast, the TV room underwent a dramatic change. Everything was transformed from white and beige to warm, dark tones. “We told Ted we’d like a comfortable space, and I particularly said I wanted it to be kind of dark. I’m a big movie guy,” says Comiskey. Maines brought in two giant sofas in a deep, plush Ultrasuede fabric where the guys could easily lounge and relax. 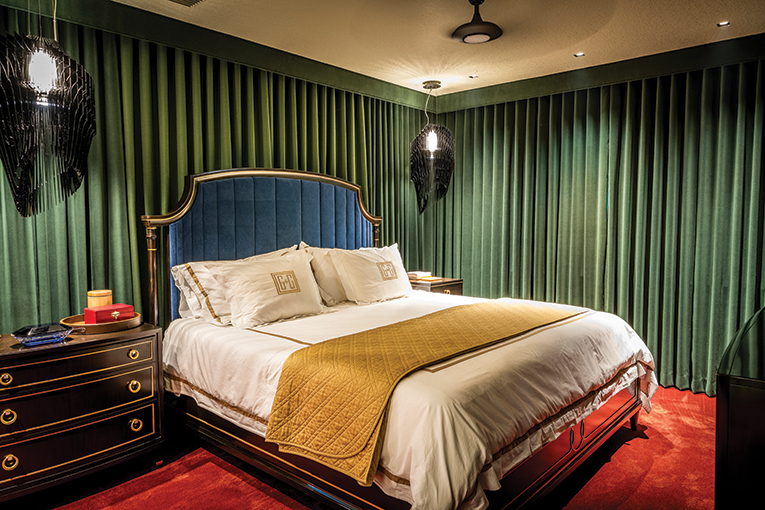 “We try to use strong-performing fabrics in a TV room because someone is always eating or drinking and could spill something on the fabric,” Maines says. The sofa’s color, a dark gray with brown undertones, worked beautifully with the room’s grass-cloth wallpaper. The lustrous textile wallcovering was chosen not only for its aesthetic appeal but for its acoustic properties as well; its heavy texture makes it ideal for a TV room. It also enhances Atchley’s framed photographs from a trip to the South Pole that grace the walls, and it complements the room’s textured Roman shades.

When one walks into the TV room, the eye is drawn to the floor, where porcelain tiles in a decorative pattern reminiscent of Old-World designs serve as a fine accent to the décor. Rather than run the detailed tiles to the edges of the room, Maines created a solid tile border and placed an area rug on the decorative portion to balance the floor’s overall design—and prevent the bold pattern from overpowering the room. Above, solid wood beams crisscross, pulling together all of the rich tones from floor to ceiling.

Off the TV room is a powder room, where Maines had some fun with a sepia-toned wallpaper entitled “Crowd (Where’s Warhol)” from Flavor Paper in Brooklyn. The wallpaper takes its design from a page in a Where’s Waldo? book and was perfect for the whimsical vibe Maines wanted in this space. The funky wallpaper company used a 1955 newswire photograph of the crowd in St. Peter’s Square in Rome on Easter Sunday to create the design. “Guests come out of the powder room and say ‘there are people watching me,’ ” says Atchley, referencing the millions of faces covering the bathroom’s walls. 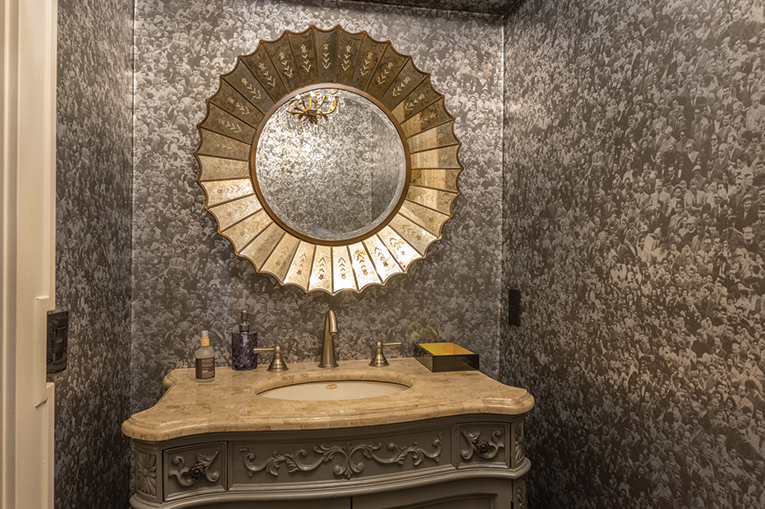 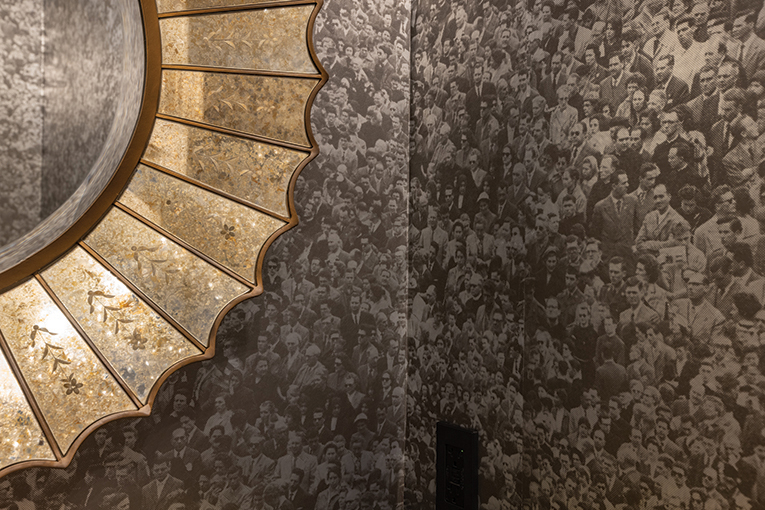 An adventurous innovator, Maines approached the master bedroom with daring creativity. Atchley recalls, “He said, ‘We have an idea that fits the time frame of the house, but it’s a little bolder than the rest of what we are doing.’ He had to sell us on this.” But in the end, the guys were wowed.

Maines compares the master bedroom’s design to that of a very high-end boutique hotel room. “You could be in any city, any time, the 1940s or 2022. The room has luxe materials, plush carpet, plush fabric for draperies, custom linens. I love that room; it is so classy, sophisticated and unusual. Something you don’t see everywhere,” says Maines.

The bedroom’s bright royal jewel tones are timeless and give the master a luxurious feel. Thick, ceiling-to-floor draperies in emerald green velvet surround the room, creating a cocoon and hiding any trace of walls and windows when closed. For Comiskey, who works as a pilot and often needs darkness to sleep during the day, the blackout draperies are not only aesthetically pleasing but functional as well, as they block out light and muffle outside sounds.

Ruby red carpeting reinforces the room’s jewel palette. Although it appears to have been part of the old house for years, it is modern at the same time. “The carpeting was a hard sell, too, but when we saw it, we agreed it was perfect,” Comiskey says.

When selecting the bed and dressers, Maines looked for pieces with design elements of French Empire furniture, seeking grandeur with period characteristics. He selected furnishings in a dark shade that enhanced the room’s saturated colors. Adding richness to this quiet space are a headboard accented in blue as well as crisp, gold-trimmed linens, monogrammed pillow shams and a gold quilt. 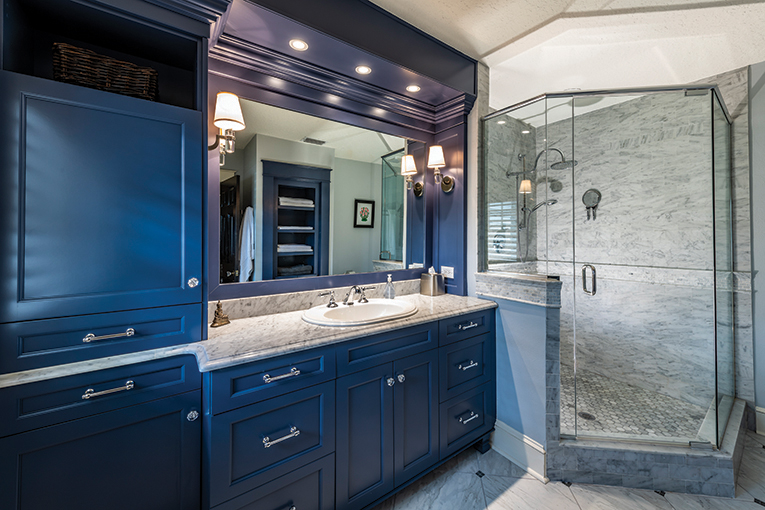 For a touch of intrigue, Maines chose two black, chandelier-style light fixtures and suspended them on either side of the bed. They add a glamorous vibe of old Hollywood to the room. These Aria pendant light fixtures by Zaha Hadid for Slamp are crafted from slender panels of Cristalflex, a material as shiny and transparent as crystal, that form an irregular sculptural silhouette. Light filters through the layers to create a dimensional aesthetic.

For anyone who is a fan of the Iraqi architect Zaha Hadid, the light fixture has sentimental value. “It was one of the last things she did before she passed away unexpectedly. I was so fascinated by her work, which I saw in the Middle East, Madrid and New York,” says Maines of the architect who was considered one of the top five in the world.

The master bath underwent a refresh to change its dynamic and better complement the restyled bedroom. Cabinets were painted a dark blue to carry the hue from the bedroom into the bathroom, working well with the white and gray marble.

When describing the master bedroom and bath, Maines doesn’t hold back on his enthusiasm: “I thought it was really different, but also timeless and cool. I just love the luxe feel of it. It screams classy and cool, very luxe,” he emphasizes.

But the designer doesn’t stop there: “I could bring my toothbrush and come live in that house. I really do love it. I love the way it’s done, the whole vibe.”

Atchley and Comiskey, no doubt, echo his sentiment.