The idea of living large with less has captured the imaginations of these adventurous, forward-thinking homeowners.

As the average new house grows in size, some homeowners are taking a fresh look at living large by living smaller. The tiny home movement—characterized by sustainability, affordability, practicality and community—has arrived in Orlando.

So what is a tiny home? Chief Marketing Officer Allen Stanfield of Cornerstone Tiny Homes in Longwood says: “A tiny home is considered any home with walls and a roof, built like a house, that is under 400 square feet.” Compare that with 309 square feet, the size of a typical master bedroom in a new home, according to the National Association of Home Builders. Tiny homes can be permanent structures on foundations or portable structures on wheels.

“There’s a phrase that typifies the movement: tiny home, big life. We’re going to be out doing things in the world. We’re not going to be stuck in the world,” says Stanfield, who is convinced as home prices continue to climb, “it’s going to drive people into tiny homes.” 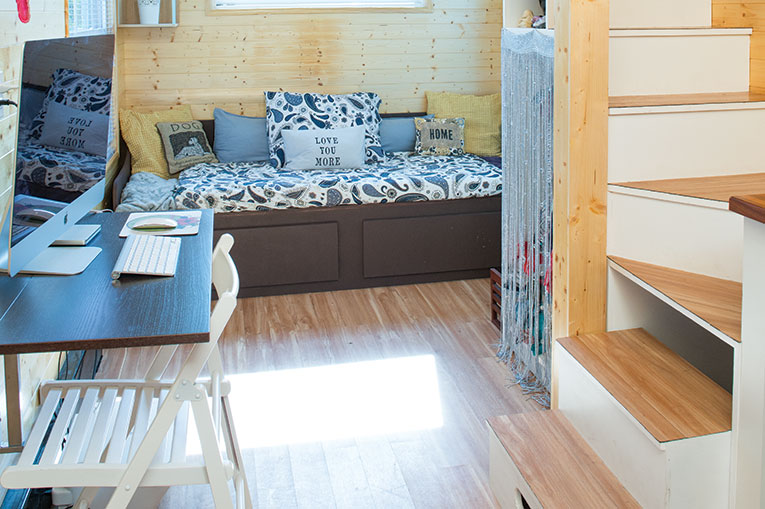 “I believe in the tiny house movement,” says builder Andrew Bennett of Trekker Trailers in Leesburg. Bennett builds his tiny homes to withstand 180-mph hurricane winds and endure up to 300 years. “I believe it’s the answer to a lot of issues in this country as far as people being able to get into a home.” Retirees, college students and recent graduates, the economically disadvantaged, the homeless and natural disaster victims all can benefit, Bennett says. “This can change the world.”

Tiny homes also provide a greater sense of connectedness, he says, as people rely more on community. “As much as people think social media have connected us, they’ve really alienated us more.”

State residential building rules haven’t caught up with tiny houses, which tend to be lumped in with RVs. As a result, tiny houses are equipped with the same utility hookups as a standard mobile home. Today only one metropolitan Orlando RV community—Orlando Lakefront at College Park—welcomes tiny homes. Most of them are on wheels, but a couple are built on foundations. Residents pay lot rent and utilities.

Haley Kalb downsized from a comfortable two-bedroom apartment and moved into a 220-square-foot tiny home in the Orlando Lakefront community in May. In anticipation, she got rid of some of her belongings—clothing, dishes, cookware—and then realized she still had more than she needed. Bench storage and under-stairway cabinetry give her a place to stow necessities. “My philosophy is stuff doesn’t make you happy. Experience and life make you happy. I want to go out and live in the world, not in my house.” 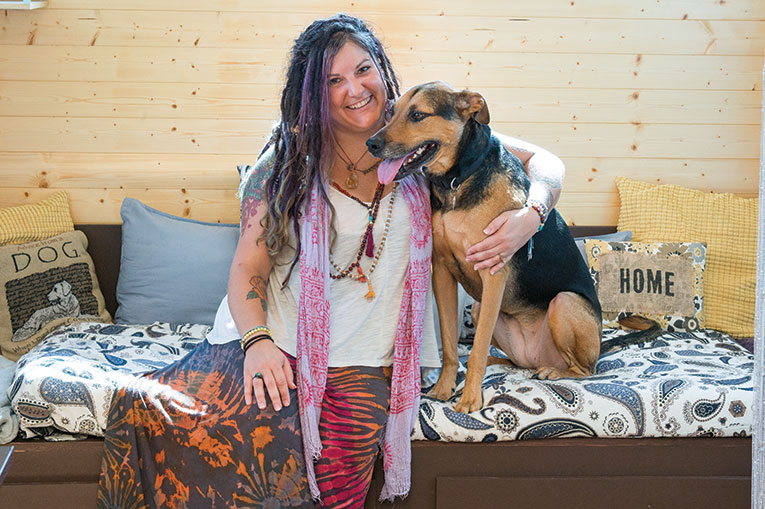 Haley Kalb and her dog, Nesta.

James Taylor landed in College Park after searching across the country for a tiny home community. “There aren’t that many,” he concedes. He calls Orlando Lakefront “a grassroots community—a grand, big experiment.” Hit hard by the recession, Taylor decided to go tiny but not austere. “I’m a tiny houser who needs all the conveniences. I have a 52-inch TV. You don’t have to live like a monk. You can have a real toilet.”

Taylor’s home—called The Company Store on Wheels as an ironic nod to a Tennessee Ernie Ford song about miners caught in a cycle of debt—is about function and style. Rustic on the outside and modern inside, the home’s design maximizes its 208 square feet to include a loft bedroom and home office space plus an additional 22 square feet of porch space. Though technically the same size as his former studio apartment in New York City, “the design of the space makes all the difference,” Taylor says.

Wendy Cartier and Marissa Salas are new to the community as the buyers of a 200-square-foot home once owned by a couple featured on HGTV’s Tiny House Hunters. “What moved me is it’s so cheap,” Salas says. “It’s like a car. Why do you spend so much money on a car when it spends so much time in a parking lot? That’s why we car-share. Then, if a community comes all together, we can all pool resources,” she says.

Orlando Lakefront may be metropolitan Orlando’s only tiny home-friendly community, but Emily Lindahl is hoping to change that. She and five friends are working together to develop a business plan for a tiny home community—a place where she can put her 225-square-foot custom home and live with 10 to 20 like-minded tiny housers.

Like Cartier and Salas, Lindahl strives for simplification and connectedness. “I believe in community. The more interconnected we are, the more joyful, the more vibrant we are. I need a place to eat, shower and come home to—a headquarters—and then I can go into the world and not be weighed down by all this stuff.”

Before moving into her tiny home, Lindahl prepared by limiting herself to using only the items that would fit into three cabinets. “It’s the economy of scale,” she continues, “a group of people maintained by a sense of community who can maintain a garden, maintain land and be efficient together. It’s more fun that way.”

Leaving behind their 2,200-square-foot house, Lindahl’s friends David and Athena Lily plan to put the 280-square-foot tiny house they are building themselves in the new community. Athena, a restaurant manager, needed room for personal and work wardrobes and a respectable kitchen. “You design these houses according to your needs,” she says. “If you need more closet space, you get more closet space. If you need more kitchen space, you build more kitchen space.”

Aimee Helm, a 27-year-old digital media professional who went into the working world saddled with college debt, is all about simplicity. Her solution: a self-built tiny home on wheels with just 50 square feet of living space that will cost her a total of $1,500 to build.

“It will be extremely minimal, but it will have everything I need on a daily basis,” she says. Her tiny home will include a loft bed, a seating area, a sink, a one-burner stove and coffee maker, and a bathroom with a camping shower and composting toilet.

“The number one thing for me is freedom and a sense of empowerment. Growing up in our economy and graduating from college in this rough financial climate, it’s been a constant struggle for me to be independent,” Helm says. “I would prefer to have only what’s really useful in life.”

The Skinny on Tiny

Tiny houses come equipped with special perks as well as challenges. Here are a few things to know before you consider going tiny.