The Queen of Converse

Penny Gold’s collection is one for the record book. 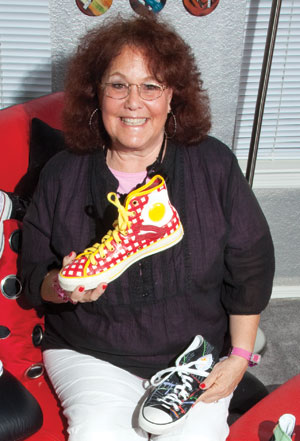 It was never Penny Gold’s intention to achieve acclaim for owning a sizable collection of Converse Chuck Taylor All Star sneakers. She got hooked on them as a kid and just kept buying them.

At 63, the retired Lake Mary schoolteacher now owns more than 730 pairs of Converse shoes, all of which she keeps in a walk-in closet at home. She loves every pair, though some more than others, and has worn about a third of them. Her collection is poised to be included in the 2013 edition of Guinness World Records, the book of all things done to the max. Joshua Mueller of Lakewood, Wash., the current record holder (yes, there is someone else out there who shares Gold’s obsession for Converse sneakers), owned 403 pairs as of 2006. A Guinness World Records spokeswoman says Mueller has not submitted an application stating he owns more Converse All Stars than Gold, who had 733 pairs at the time her son notified Guinness. So, she’s a virtual shoo-in to be included in Guinness’ next edition.

Gold says she has accumulated more than half her collection in the last 15 years, spending about $15,000 in the process. She frequents Orlando shoe outlets every week, with some stores calling her when they receive pairs of custom-made Converse Chucks that buyers returned. “The store will call me, and I’ll buy them!” says Gold. “My husband will glue buttons over the names [of the buyers] if they’re
obvious. I swear I have ‘Kesha’ 20 times already.”

She prefers the more colorful styles of Converse, and her favorites include pairs decorated by her grandchildren, “The Doors” rock-group selection and a wacky 1950s diner-inspired pair with plastic fried eggs attached.

Now that she is on the cusp of being recognized as a world record holder, Gold plans to continue adding to her collection so she will remain the queen of Converse for years to come. Her goal is 1,000 pairs.  “Just yesterday,” she says, “I bought five more pairs, and I got a pair as a gift. As my husband always says, there are worse addictions to have.”

This article appears in the March 2012 issue of Orlando Magazine.
Categories: Community