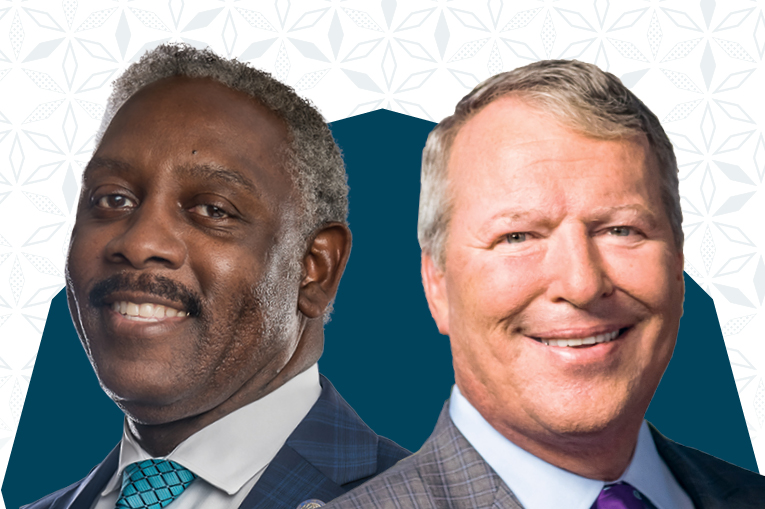 Orange County Mayor Jerry Demings has been married for 34 years to the woman at the top of this year’s Orlando magazine Most Powerful list: U.S. Representative Val Demings. For most of that time, he’s been closely connected to another Most-Powerful shoo-in, Orlando Mayor Buddy Dyer: first as the city’s Chief of Police, then as Orange County’s Director of Public Safety, and for the past four years as a fellow mayor.

Since then, it’s been no exaggeration to call the two men Central Florida’s most powerful twosome.

Dyer is the dean of the country’s big-city mayors, having overseen a turn-of-the-century Renaissance of a frayed-at-the-edges Central Florida town whose most apparent distinction was its collection of pretty lakes and its proximity to Walt Disney World.

Since being elected 19 years ago, Dyer, who likes to describe Orlando as the kind of city “where you don’t have to be third generation to be somebody important,” has done wonders to touch up that civic self-image.

He orchestrated campaigns to highlight the charm of neighborhoods around the city core, curried sports franchises, stumped for a new arena, oversaw the final phases of the long-awaited Dr. Phillips Center for the Performing Arts, and championed the development of Lake Nona and Creative Village as high-tech digital media and educational enclaves.

It was enough to inspire Orlando attorney John Morgan to break down the history of Orlando into two vaguely biblical-sounding eras: Before Buddy and After Buddy.

Michael Griffin, former deputy editor of the Orlando Sentinel’s editorial page and AdventHealth’s senior vice president of advocacy and public policy: “Buddy had a vision, and he stuck to it. He said we can be something great and don’t have to be the next Austin to do it.”

That ongoing transformation happened despite Central Florida being essentially a house divided governmentally for many years. As Florida Politics commentator Scott Powers says, “operating like a divided Congress. Democrats running the city government and Republicans running the larger, and in many ways more powerful, Orange County government.”

More recently, the eight-year relationship between Dyer and former Orange County Mayor Teresa Jacobs was characterized by political insiders as a high-performance vehicle, with Dyer keeping his foot on the gas. In contrast, Jacobs held hers poised over the brake. 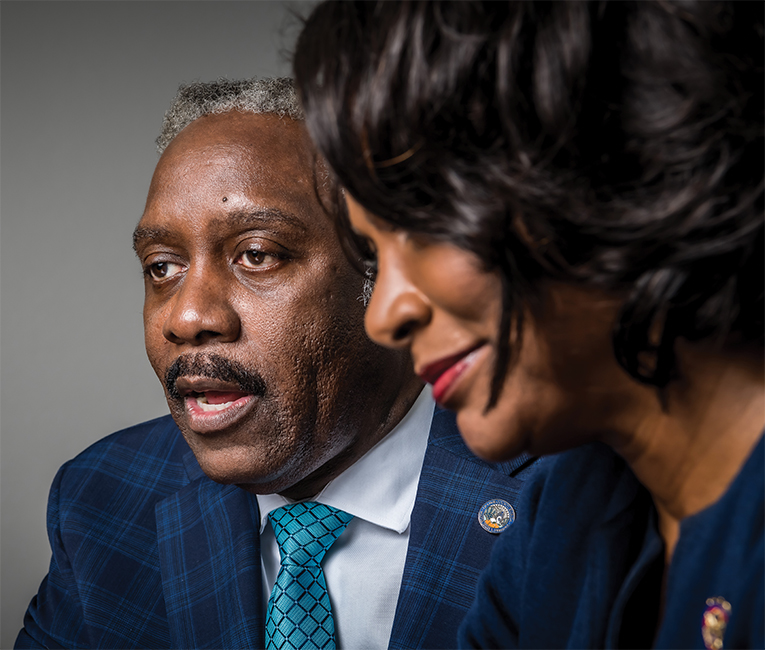 Since Deming’s election, the two mayors have operated more like a NASCAR pit crew, contending with the accelerating problems brought on by success, given the transportation, housing, public safety, and overall community well-being issues that growth has imposed on an ever-more-populous region.

A case in point is a recent effort the two mayors jointly made to smooth the way for the Sunshine Corridor Program—a plan to extend SunRail commuter train service to Orlando International Airport and the Orange County Convention Center. The project could also include higher-speed rail to Disney World from the airport, all of it potentially underwritten, in part, by grants made possible by a $1.2 trillion Infrastructure and Jobs Act approved by Congress.

Dyer arranged meetings to temper chronic clashes between SunRail and Brightline. Demings followed up with a brisk and no-nonsense letter-writing campaign along the same lines.
That’s the kind of cut-to-the-chase teamwork a non-partisan assemblage of county and city leaders had in mind nine years ago when they asked Demings to run for county mayor. He was planning to retire, give up his strait-laced ways, spend more time with Val driving their matching Harley-Davidson motorcycles around, and maybe (no kidding) do a little skydiving.
The list of corporate backers included some significant ones: Disney World, for example.

“The drumbeat got pretty loud,” he says. In the end, he agreed and set aside his retirement plans.

“Now I can just pick up the phone,” says a delighted Dyer of the smoothed-out partnership between city and county that has held sway since Demings came on board.

Like most power couples, marital or otherwise, the two men parallel each other in some ways while differing substantially in others.

Dyer is country and white. He grew up in Kissimmee. His family’s ancestry goes back to 18th-century settlers who lived in Fort Seybert, in Pendleton County, West Virginia. Dyer’s father hauled livestock, was a championship bull rider, and went by Butch—which accounts for why his son, born James Earl Dyer, got the next one on the B-list as Buddy. His mother had a country-western clothing shop, which may account for why Buddy, who went to Brown University for college, stood out among his fellow students by wearing a weather-beaten cowboy hat to class. To this day, the mayor is fond of describing himself as “an Ivy-League redneck.”

Demings is city and black, growing up in a segregated subdivision on the west side. His father drove a cab. His mother took a bus to the other side of town to clean the homes of white people. When that wasn’t enough, the family operated a small neighborhood produce market. Their son made an early decision to do everything he could to better himself. “I knew as a youth that I did not want to stay a poor kid from Washington Shores for the rest of my life.”

He studied at Florida State University and Everest College, becoming an accountant upon graduation because he wanted a reliable profession, but soon gave in to his longtime interest in law enforcement and earned a job as a detective in the Orlando Police Department. That was how he met Val, a social worker at the time.

The two of them were members of a politically progressive congregation on the west side, Saint Mark AME Church, where they met and befriended Dyer, who was a frequent visitor to the church during his years in the Florida state senate in the 1990s.

Perhaps because of his experience as a detective, Demings has a keen eye for character. “I could see right away that Buddy had this calm demeanor that pulled people in,” he says. “I almost saw him as an introvert.”

The two men, both in their mid-60s, born almost a year apart, have been involved in the central Florida government for roughly the same time. Yet Dyer is the better-known presence for the public—persistent but unassuming, driven but approachable, and an inclusive, non-judgmental soul. That was obvious to anyone in the downtown Orlando scene long before it evolved into an emotional bond the world bore witness to via his heartfelt leadership during the pitch-dark trauma of the Pulse tragedy. The city is his love and his life’s work. It’s hard to imagine him not running for at least one more term as mayor.

But for the time being, at least, the future of Central Florida hinges on a proposal developed by a man who sees humility as a virtue, frequently describes himself as a public servant, and says he doesn’t even like the term “most powerful” because it connotes someone self-centered.

Next month, voters will weigh in on an ambitious initiative proposed by Demings that would rival, even dwarf, Dyer’s developmental handiwork. It’s a proposal for an Orange County sales-tax hike that would generate roughly $600 million annually for two decades to fund massive mass transit and roadway overhaul.

“All the emerging cities of tomorrow have mass transit, multi-modal systems,” says Demings, who calculates that the return on investment in terms of the economic impact brought on by the improvements would amount to an astonishing $48 billion. 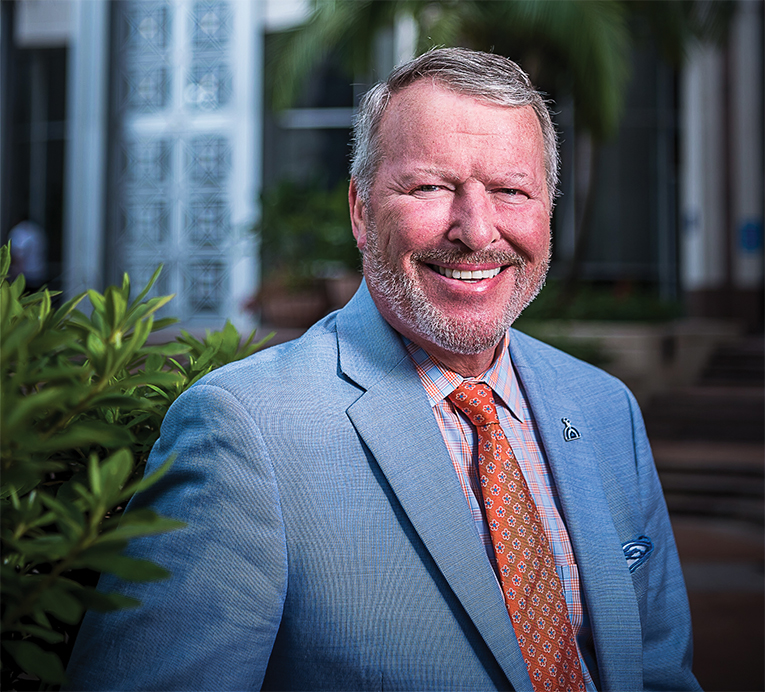 As a guideline to what it would mean to the consumer, the tax on a five-dollar purchase in Orange County is now 33 cents. It will become 38 cents if they approved the hike. It’s estimated that roughly half of that $600 million in sales tax yearly would be funded via tourist purchases. Roughly half the money raised would go to transit projects, the rest to maintain roadways and safety. The tax would not apply to purchases of essential food items, prescription drugs, and utilities.

Critics have argued that other income streams should make the improvements. Demings counters that, given the ongoing flood of new residents to the state, an additional source of funding will be necessary because existing budgets will be taxed by the increasing needs in other areas, such as low-income housing. He is proud of an initiative that keeps people suffering from mental illness from going to prison.

Roughly 845 people are moving to Florida every day. That is a mind-boggling number, an astonishing, ongoing, unprecedented migration, and Central Florida will be smack in the middle of it.
Demings is a pragmatist, a nuts-and-bolts guy with a single-minded way about him, the kind of burrower who’s so intent on running a problem to the ground he can forget that not everybody else operates that way. He once appeared as a guest on a virtual question-and-answer session sponsored by the Orlando Sentinel. He was chastised in print by the paper a few days later for ignoring the time limit and charging ahead until he’d checked all the boxes when asked a question.

You can see how he and Buddy Dyer would make a good team. Dyer is the consensus-builder, the guy with a circle of people around him at a party. But it’s never a bad idea when someone with an accounting background walks into the room to peel away from the group and see what they have to say.

This article appears in the October 2022 issue of Orlando Magazine.
Categories: People
Tags: 50 Most Powerful, Buddy Dyer, Florida Central, Jerry Demings, Mayors, Orlando, people, politics
Want to read the whole issue? Download and read this issue and others on Magzter.