Burger 21
“Beyond the Better Burger”
The owners of The Melting Pot fondue restaurants started Tampa native Burger 21 in 2010. Known for the “B-isms” (“B-saucy”, “B-comfortable”) painted on the walls and unusual seafood burgers. Unlike most large burger joints, they offer medium-well burgers with pink centers. burger21.com 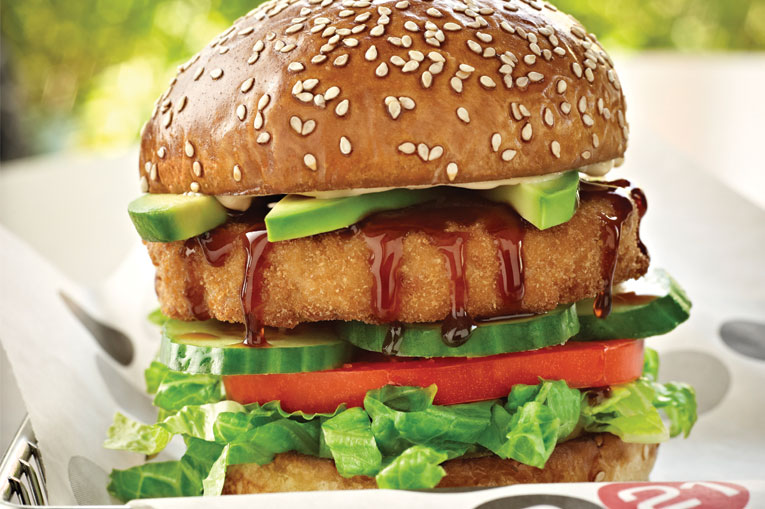 BurgerFi
“Better Because We Try”
Delray Beach is headquarters of BurgerFi, an international chain that prides itself on all-natural ingredients and the absence of microwaves, freezers, or heat lamps. Along with the new standard of Angus beef, 28-day dry-aged grass-fed ground brisket burgers and “WagyuKobe” hotdogs are offered. burgerfi.com

Five Guys
“Famous Burgers and Fries”
Founder Jerry Murell’s five sons (the “five guys”) run operations of the massive burger chain, which boasts more than 1,000 locations (they own 200 stores; the rest are franchises). Five Guys buys 8 percent of the entire Idaho potato crop for its fries. The original location featured a sign that said “If you’re in a hurry, there are a lot of really good hamburger places within a short distance from here.” fiveguys.com

Freddy’s Frozen Custard & Steakburgers
“The Taste That Brings You Back”
With plans to open more than 20 Orlando-area locations, Freddy’s old-fashioned Midwestern traditions and food hit the mark with fans, making it the country’s fifth fastest-growing chain restaurant. The menu is highlighted by simple steakburgers, patty melts and Coney Island-style frozen custard. freddysusa.com

Hamburger Mary’s
“Eat, Drink and Be… Mary!”
One of the most improbable success stories in Food-dom, the Mary’s chain combines outrageous burgers (a red wine and garlic-doused Buffy the Burger Slayer, anyone?) with even more outrageous female impersonators and a drag Broadway brunch. hamburgermarys.com

Jimmy Hula’s
“Here Becomes There But Never Ceases to Be”
Telling the tale of the probably fictional Jimmy Hula and his culinary travels, the tiki hut-decorated locations offer Key West fish sandwiches, fish tacos inspired by Brazil and Australia and, most importantly, burgers. The Juan Jovi (with pork, ham, Swiss cheese and habanero sauce) and the Burnt Reynolds (egg, bacon and potato chips) would make any beach bum wannabe feel right at home. jimmyhulas.com

Cowfish
“The First and Only Sushi Burger Bar”
Not a mutant cattle and seafood experiment, the hybrid menu stylings of this CityWalk eatery feature “Burgushi” fusion, including a bento box combination of beef sliders and sushi rolls, and a tuna/bacon “sandwich” made with grilled spring roll wrappers as the bun. thecowfish.com

Red Robin
“Insanely Delicious”
Not to be confused with the Batman character, Red Robin got its start in Seattle in 1969 and has grown to more than 450 locations, priding itself on using humanely raised proteins and sustainably farmed produce. Along with the unending supply of “bottomless” fries, adult beverages in the form of margaritas and Mai Tais can be had. redrobin.com

Shake Shack
“Stand for Something Good”
From hot dog cart to monster burger chain, Shake Shack, with only 71 stores (McDonald’s has 36,000), was worth an estimated $1.7 billion when it went public in January. That’s a lot of beef and Martin’s potato rolls. To keep things interesting, they introduced a lobster roll/burger hybrid this past summer and a fried chicken sandwich that sold out almost immediately. shakeshack.com 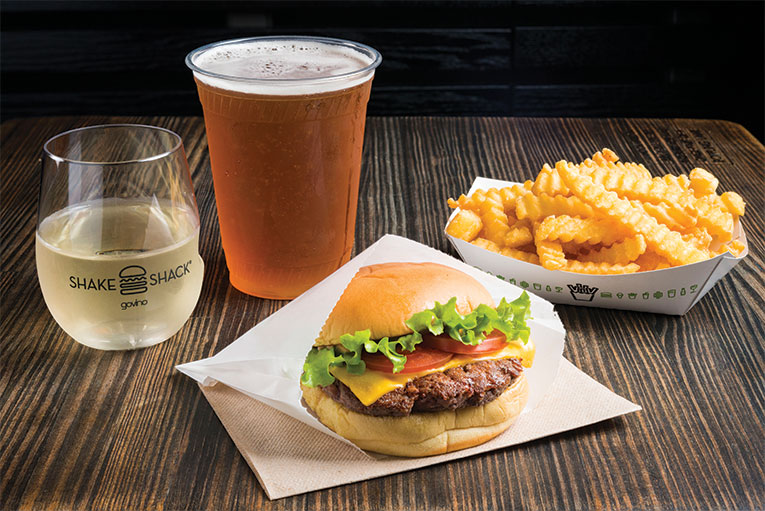 Wahlburgers (opening in December)
“Our Family, Our Story, Our Burgers”
The only burger chain in town with its own reality TV series, owned by actors Mark and Donnie Wahlberg. The first Wahlburgers opened three years ago and is set to hit 300 locations at breakneck speed. There seems to be as much interest in the branded hockey jerseys and hats as the thick burgers made with Midwest beef. wahlburgersrestaurant.com