It’s where the blues were born and where MLK, Jr. died—where guitars are made and played. It is a city of barbecue and Southern soul food.

Where the Mississippi River flows past Memphis, music came with it. Drifting downriver through tributaries came Chicago’s R&B, hillbilly from neighboring Arkansas, and St. Louis blues making the journey from Missouri. Somehow its currents were strong enough to pull jazz up from New Orleans’ French Quarter while hauling in the work songs, gospel and bedrock blues from the fields of the Mississippi Delta north of Vicksburg. 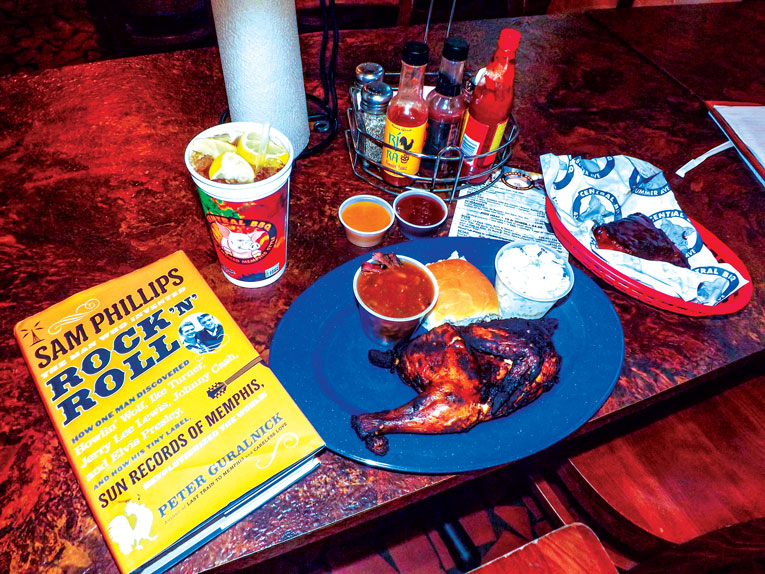 Before traveling to Memphis, check out the bios on Elvis Presley and Sam Phillips, “the man who invented rock ‘n’ roll” (NANCY HOWELL)

By the time he first entered a Memphis recording studio, Elvis Presley had absorbed every one of these sounds. And on the evening of July 5, 1954, the Memphis teenager blended all of them on a single record that sparked music’s Big Bang.

Memphis is one of the most fascinating cities in the American South, and a visit should begin where it all began: Sun Records.

For many music fans, 706 Union Avenue is as much a legend as Abbey Road since it was at Sam Phillips’ tiny Memphis Recording Service where black musicians found their voice. Howlin’ Wolf recorded here, followed by the Delta Cats whose Rocket 88 is considered the first rock ‘n’ roll hit. All of this caught the attention of Elvis.

The short story is that in 1953 the 18-year-old Humes High grad came here to record himself singing My Happiness. After a year of anxious waiting, Elvis finally got an invitation from Phillips to jam with guitarist Scotty Moore and bassist Bill Black at a test session. After four hours of trying to sound like hitmakers of the day Dean Martin or Perry Como, Elvis felt his one shot slipping away. In frustration, he began vamping on an obscure R&B number titled That’s All Right, Mama. Moore and Black were surprised by the kid’s awareness of the song and immediately joined in. The trio created a fresh genre of music that opened the floodgates for new Sun Records artists including Carl Perkins, Johnny Cash, Jerry Lee Lewis and Roy Orbison. Take a fact-filled tour, which is fascinating, and if you want to come back after hours, bring your guitar. You can still rent time at this working studio.

To understand what Graceland meant to Elvis, consider that in 1954 he was living in a $35 a month federal housing apartment. Three years later, the 22-year-old millionaire was one of the most famous people in the world. Graceland symbolized his achievement of the American Dream. 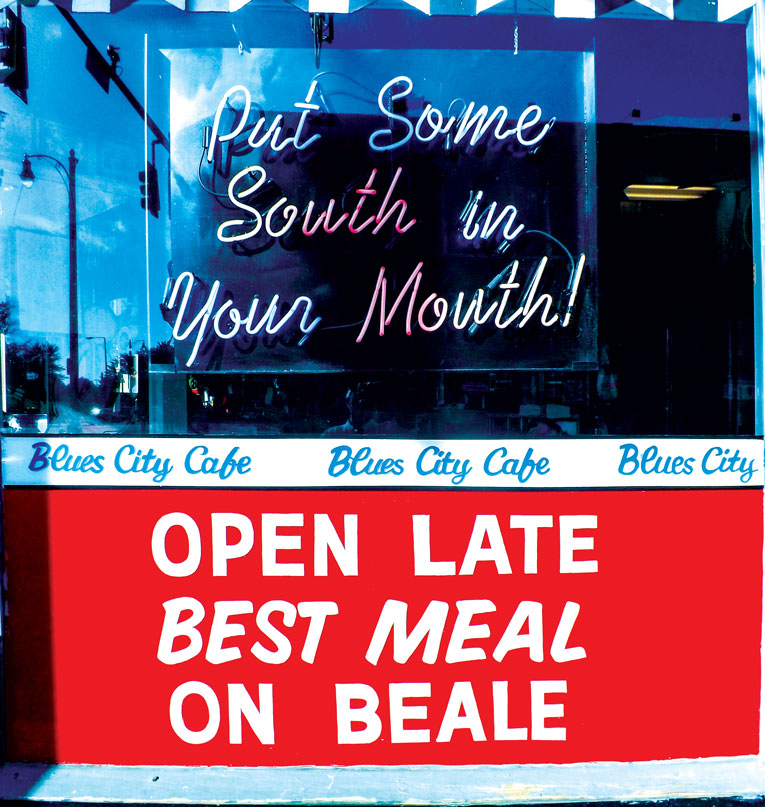 Mansion tours showcase exhibits filled with Elvis memorabilia including awards, motorcycles, cars and two jets. Sadly, these possessions meant nothing. His palace became his prison and eventually, his final resting place. The tour concludes at Meditation Garden, where Elvis is buried alongside his parents. If you arrive before the tours begin, the gates are open for guests who just wish to walk up to the gravesite and pay their respects.

W.C. Handy, the “Father of the Blues,” added hints of gospel to broaden the appeal of regional Delta blues, and had his first hit with 1912’s twelve-bar Memphis Blues. You’ll find the W. C. Handy House and Museum perfectly placed at the corner of Fourth and Beale streets. Perfect, because for most of its history Beale Street was the commercial district for the city’s black community. There were black-owned newspapers, beauty parlors, medical and dental offices, banks, insurance companies, tailors and juke joints that were jumping from dusk to dawn. Today there are many cool music and souvenir shops including A. Schwab. Here since 1876, it’s the last original business on Beale and the place where you can stock up on dry goods, magic potions, voodoo supplies, skillets, celluloid collars, and the like.

At night, the joint is still jumping with blues, rock and jazz pounding out of clubs like Silky O’Sullivan’s, Rum Boogie, B.B. King’s Blues Club and the Blue Note Bar & Grill.

In comparison to the rather seamless integration of music, in other aspects integration wasn’t so easy. That story is examined a few blocks from Beale at the National Civil Rights Museum.

Had Martin Luther King, Jr.’s 1968 visit to Memphis been uneventful, chances are you would have never known of the Lorraine Motel. But when he came here to assist the city’s striking sanitation workers, he was killed as he stood at the doorway of Room 306. With a place in history, the segregated motel became part of a museum complex in 1991 where exhibits detail the timeline of slavery, discrimination and Jim Crow laws weighted against blacks. Outside, video kiosks tell the chronological story of King’s visit, including the history of the motel, conditions leading to the strike and the strike itself, the assassination and its aftermath. Look down at the pavement—a line traces the path of the bullet back to the boardinghouse where the assassin waited, which is also part of the tour.

Memphis is a sprawling, diverse, historic city that makes an ideal base for digging deeper into the region’s music and literature.

Day tripping
From Memphis, it’s only a 90-minute drive to Mississippi sights including Tupelo (Elvis’s birthplace), Clarksdale (epicenter of the Delta Blues) and Oxford (literary greats including William Faulkner).

Where to Stay
The Peabody hotel remains a classic throwback to Old Memphis. If your journey is primarily based on Elvis, consider The Guest House at Graceland, which opened next door to the mansion in October 2016.

Don't Miss
For starters, the Gibson Guitar Factory & Tour, Stax Museum of American Soul Music, the Center for Southern Folklore, and the Memphis Rock ‘n’ Soul Museum. Check it all out at memphistravel.com