From real malts to a monster sundae, it’s time to chill out.

There might not be a better treat for walking around downtown Orlando than a remarkably flavored ice pop. At The Pop Parlour, real fruits and vegetables, fresh herbs and unlikely combinations create flavors like Guatemalan Zacapa rum and pear, watermelon raspberry lemonade, and the high octane Breakfast of Champions blend of vanilla, whiskey and roasted corn flakes. Pops made with gin, beer and wine, creamy combinations of cheesecake, peanut butter and coconut milk, or even just plain strawberry make for portable delights. 3 Orlando-area locations; thepopparlour.com

Long before Haagen-Dazs, Ben & Jerry’s and Talenti spoiled us for wimpy ice cream, the legendary Hershey’s was the gold standard. Founded in 1894, the Hershey Creamery (no relation to the chocolate town in Pennsylvania) still supplies old-time parlors such as Scoops. Straight out of the 1950s, Scoops, at the base of the Edgewater Hotel, fits the bill with worn wooden counters, panoramic glass display cases, low ceiling fans and old-fashioned bar stools. A hand-dipped cone of butter pecan or chocolate mint is enough to transport you back in time. 99 W. Plant St., Winter Garden

Untouched by much of modern life, this 68-year-old stand sits in its original location, all but unnoticed. While the passing traffic may have changed, the custard-like soft serve remains much as Illinois-born Edwin Goff would have dished up when he opened the stand in 1948. Goff sold the business to the Truesdell family in 1973 to return to his original profession: undertaker. The drive-in without an actual driveway is now run by Todd Peacock, a Truesdell grandson, and you’ll find vanilla cones dipped in cherry hard-shell coating, fruit toppings and a wonderfully rich hot fudge milkshake. 212 S. Orange Blossom Tr., Orlando

This I-Drive 360 newcomer, which offers a full food menu, specializes in “adult” treats like alcoholic chocolate martinis and cocktail goblets that emit smoke. In the extreme over-the-top sharing dessert category is the “World Famous Sugar Factory King Kong Sundae” with 24 scoops of ice cream, assorted toppings, lollipops and sparklers for $99. And don’t forget the Chocolate Gold Fondue, massing melted dark chocolate truffles, nuggets, chocolate bars and Gummi bears (all gold-coated) into a $1,000 experience, along with a bottle of Dom Perignon, cognac and a gift bag. It makes sense with a gift bag. 8371 International Drive and locations nationwide; sugarfactory.com/orlando

The sweets of the subcontinent are as sophisticated and complex as any Indian or Pakistani dish. As opposed to sticking milk in a freezer, Indian kulfi is first slow cooked to slightly caramelize the cream, then flavored with pistachio, cardamom, rose water or saffron. Alongside frozen yogurt and standard ice cream, the silky kulfi is served at the family-owned Cruncheez and comes in pistachio and mango flavors. It’s available as scooped servings or convenient walk-along pops. 2120 Whisper Lakes Blvd., Orlando; facebook.com/Crunheezorlando 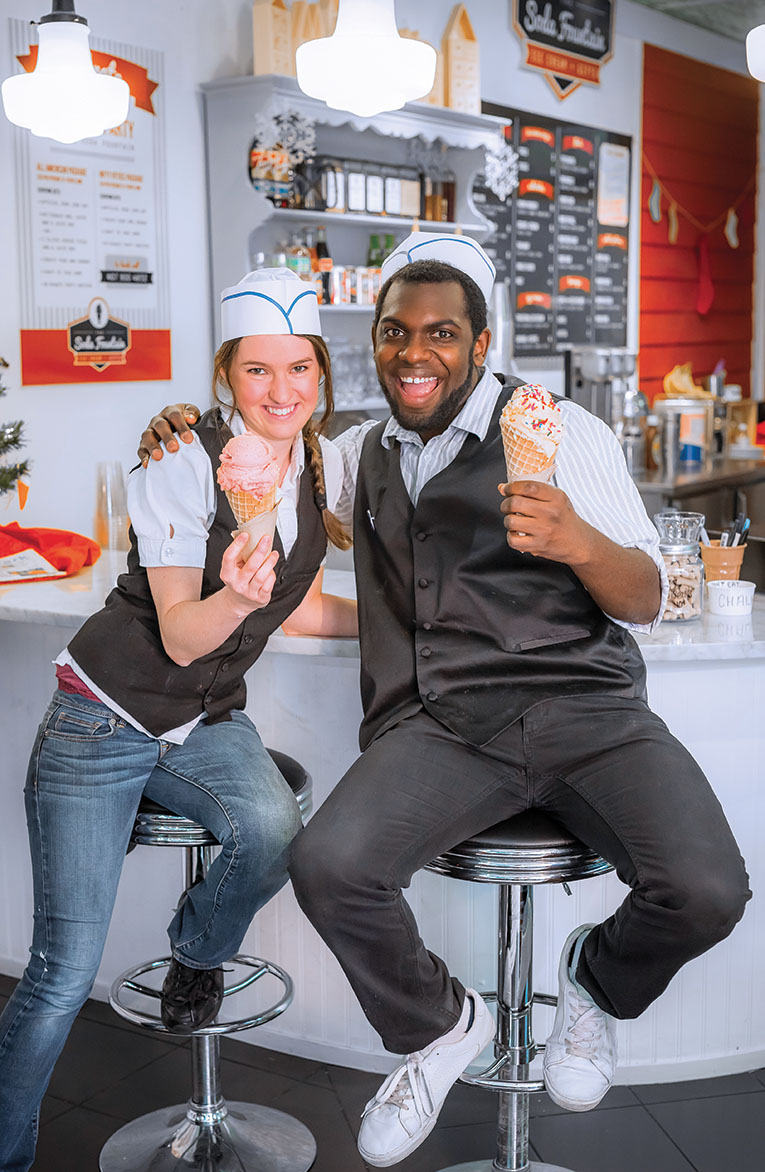 The Soda Fountain (Above)

According to the Old Farmer’s Almanac, ice cream dates back to 7th century China, where fermented milk was chilled over ice sourced in the Himalayas. The Ice Cream Social Club truck may not have to hire a Sherpa guide, but it does travel wide, from New Smyrna Beach to Mount Dora to South Beach, proffering liquid nitrogen-frozen treats made by Culinary Institute graduate Ralph Rendsland. It says “gourmet ice cream specialties’’ on the truck, and that translates into Bananas Foster and Cherries Jubilee signatures, and Tahitian vanilla and double chocolate bases for delightful dishes. facebook.com/theicecreamsocialclub 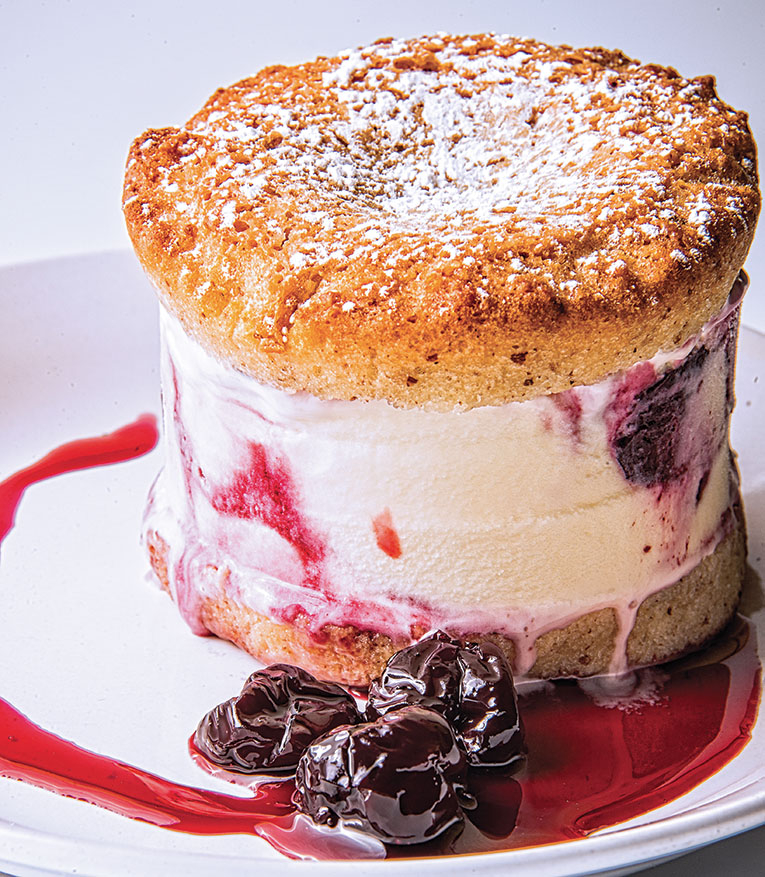 I’m on a diet, you might say, so I’ll just have a tiny ice cream sandwich. Not when they come from the Midnight Sun truck. A high point of the Audubon Park Market, the hand-filling, frozen-meets-cookie creations of Levi and Jocelyn Stewart combine chewy artisan cookies and impossibly good ice cream flavors. Try malted Black & Tan caramel ice cream sandwiched within chocolate chip and potato chip cookies, or almond-cardamom shortbread cookies around Riesling-poached D’anjou pear ice cream. My mouth is watering just writing that. midnightsunicecream.com

From food truck to “brick and mortar” shop is the rarely voiced but hopeful goal of the mobile “foodtrepreneur,’’ and much rejoicing is heard when it actually works. Such is the case with the dazzling pink Kelly’s truck, which came from successful farmers market sales and begat the storefront on Corrine in mid-2015. Homemade means handmade here, with Kelly Seidl whipping up ice creams such as Mexican chocolate spiced with cinnamon and nutmeg, and maple bourbon bacon. Of particular delight are ice cream flight samplers and wine-infused sorbets. 3114 Corrine Drive, Orlando; kellyshomemadeicecream.com

The offerings at Philadelphia import Jeremiah’s include what they call “gelati,” which in Italy is plural for gelato but in America has come to mean soft-serve ice cream layered with frozen flavored ice. With more than 40 flavors, including cake batter, root beer and “froggy frog,” this is a place that inspires long lines—winter and summer. Young women in T-shirts and shorts serve up frosty treats with a smile, and while it may not be the prime reason for Jeremiah’s popularity, it certainly can’t hurt. Moving the Maitland location from its picturesque curbside stand to a strip mall means giving up the experience of standing in line on the sidewalk, but we’re told that the servers will remain. 10 Orlando-area locations; jeremiahsice.com

Every few decades, yogurt goes from niche treat to health food to national frenzy. Right now, international exploration has crammed our market shelves with Greek, Icelandic and Australian varieties, along with the super hip Blue Hill brand from hyper-local New York chef Dan Barber. But while dairy section brands swell, the frozen yogurt stand has gone from an eager assortment of independent local shops into overlapping chains of corporate stores that seem to be as disposable as they are interchangeable.