The original Donut King in Minneola covers all your New Orleans cravings with a menu that features everything from po’ boy sandwiches and gumbo to jambalaya and beignets. But the Winter Park location (left) focuses on the sweet side of this non-Krispy, anti-Dunkin’ bakery with hand-crafted donut variations such as a Mardi Gras-themed King Cake donut (filled or plain), custard-filled donut holes, enormous apple fritters and flavors like maple bacon, coconut cream and red velvet cake. Locations in Winter Park and Minneola; thedonutking.com 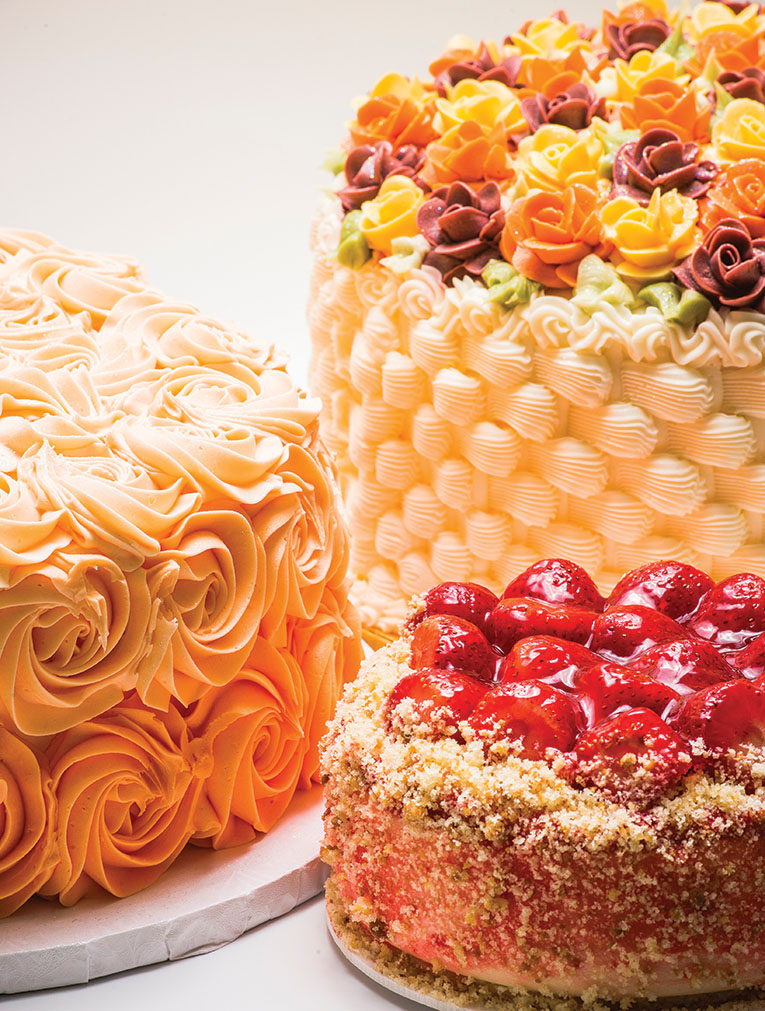 Charlie Hawks, former baker at Wolfie’s, the legendary Jewish deli in Miami, opened his iconic bakery in 1971, and little has changed in the family-owned business since then—except for the addition of a food truck, of course. A perpetual reader’s choice for the Orlando magazine Dining Awards, Charlie’s creates items such as checkerboard cake, rainbow cookies and mincemeat pies that have become nostalgic and forgotten treats elsewhere. Reminders of the deli’s past show up in elephant ear pastries, cream cheese rugelach and real coconut macaroons, but it’s the overstuffed fruit pies and butter-laden cakes that have kept people coming back for 45 years. 3213 Curry Ford Road, Orlando; charliesgourmetpastries.com

“Hand crafted” is an oft-used phrase these days, but you really can see the crafting in these thick, almost rustic baked goodies. Proprietor Selma Sayin firmly believes in chocolate: her white chocolate chip cookie mixes white and semi-sweet chips with toffee pieces; the Butterfinger brownies combine candy bar chunks with layers of chocolate; pecan chunks and chocolate chips share space with marshmallow creme and caramel topping in the Chocolate Chip Pecan cookie. Known nationwide but manufactured locally, Selma’s doesn’t have a storefront but the sweets are sold at Disney, Barnie’s CoffeeKitchen and directly from the website. selmas.com 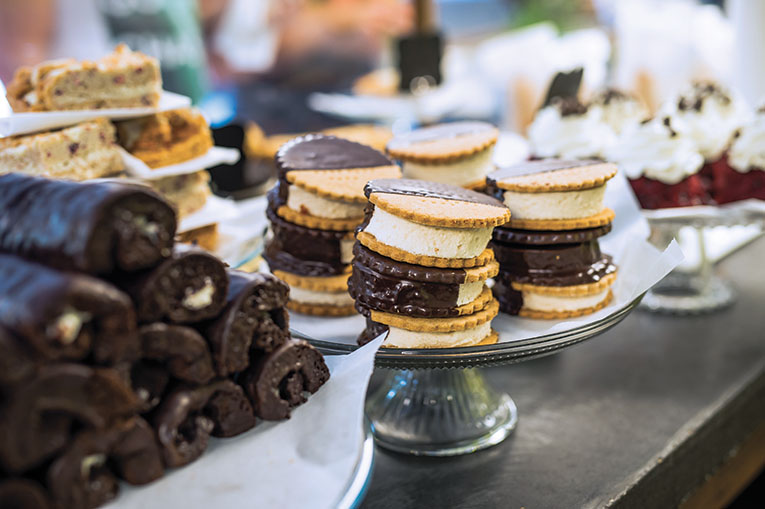 With a new, larger location opening in May just down the road from the current shop, owner/baker/local food icon Trina Gregory-Propst plans on extending the Se7en Bites hold on our taste buds. But she’s already captured the fancy of those craving mile-high cream cakes, hand-made renditions of whoopee pies and Swiss rolls, and that elusive treasure of take-home, the chicken pot pie with a perfect flaky crust. How can you not love hand-made peanut butter and jelly moon pies and salted dark chocolate pecan pie? 207 N. Primrose Drive, Orlando; se7enbites.com

Hollis Wilder, three-time winner of the Food Network’s Cupcake Wars, made the biggest splash in the cupcake explosion at the beginning of this decade. When we featured her back in 2010, the empire was just a dream; now a combination of business savvy, engaging personality and baking talent has taken her from storefront to TV screen, a second location in Jacksonville, and the transformation of the Yum Yum Cupcake food truck into a mobile Sweet dispenser. Each of her 50-plus creations (Key lime or coffee are my go-tos) makes use of lots of butter and honest ingredients. 711 N. Alafaya Trail, Orlando; sweetbyholly.com

Occupying the sweet side of vegan heaven Market on South, former Publix baker Celine Mariah Duvoisin has enthusiastically embraced egg-free, dairy-free principles while creating some outrageously satisfying desserts. The bakery shares a counter and creed with Humble Bumble Kombucha and ex-food truck chef Dixie Dharma. The signature Nanaimo bar is a dense chocolate, coconut and custard mind-blower and, as owner/baker Duvoisin states, “One hundred percent vegan-friendly and not healthy at all.” How she makes buttercream with neither butter nor cream surely must be magic. 2603 E. South St., Orlando; valhallabakery.com 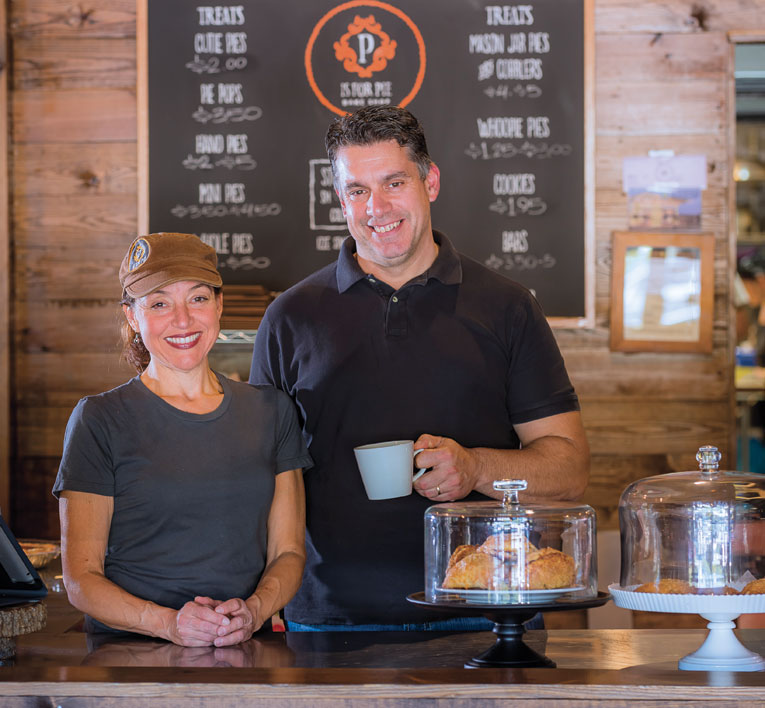 P is for Pie

Stacey and Ed Tomljenovich faced a daunting task last October. Taking over the popular P Is For Pie just two weeks before a feature spot at Winter Park’s signature Cows ‘n Cabs event, and less than two months from Thanksgiving, meant risking reputation and business. But Ed, a former restaurant manager, and Stacy, late of the health care trade, had a vision of new beginnings in their own shop, and their passion carried them through. “Have we baked professionally before?” Ed posed. “No. But we wanted our own place, and life is a lot sweeter when the work is for yourself.”

Sweeter is the right word when offering goodies such as chocolate peanut butter sea salt pie in a Mason jar and a 9-inch masterpiece of a pumpkin pie topped with a pecan pie.

The Tomljenoviches, who bought the business from baker Tara Gould, have retained the former proprietor’s recipes and staff (“The old P is still here,” says Ed), but are putting a savory twist on new creations. Wearing a P Is For Pie cap, Stacey (who Ed calls “the creative side”) effuses about their Christmas Story hand pie, a portable package of roast duck, sweet potato mash, and cranberry goat cheese that was even better than her description. “Hand pies, cutie pies, mini pies, whoopee pies—this is maximum comfort food,” she says. “And it will only get better.”

Blue ribbon baker Evette Rahman creates pies (right) and cakes from scratch in a bright space just off the corner of Orange and Michigan. Her “Sensational Strawberry Cheese Pie” won as 2014 Best in Show at the American Pie Council national championships, and it wasn’t just for how it looked. Indulgences include a three-layered Hummingbird cake, filled with bananas, pineapple and pecans under cream cheese frosting, and a resplendent peanut butter satin pie. The logo on the wall says, “If you are what you eat, eat something sweet.” 247 E. Michigan St., Orlando; sisterhoneys.com

Proprietors Joel Pfrogner and Jeff Lambert were at the forefront of Audubon Park coolness, opening Blue Bird in 2010. Cupcake masterpieces (try the Buckeye peanut butter triple threat or strawberry balsamic wonder) are just a sample of the delights, baked daily in limited quantities. The cherry, pistachio and chocolate Kimberly cookie is a personal favorite, and you can never have too many mocha chocolate chip scones. The house brand coffee, Top Hat, is really good too. 3122 Corrine Drive, Orlando; bluebirdbakeshop.com

Patti Schmidt is an Orlando legend, a powerhouse baker who has graced the menus of many major restaurants for years while seducing her own customers with delights such as her famous towering carrot cake (her best seller) and chocolate chip-stuffed tiramisu torte. While her various locations may shift (her shop on Church Street is particularly missed), the new location at The Marketplace at Dr. Phillips has the pink-bedecked look of an expensive French lingerie shop and the smell of pure sugary heaven. 7600 Dr. Phillips Blvd., Orlando; dessertlady.com