Story of a … Swan Volunteer

For the past 15 years, Patty Pekins has dedicated her time to caring for the swans at Lake Eola. 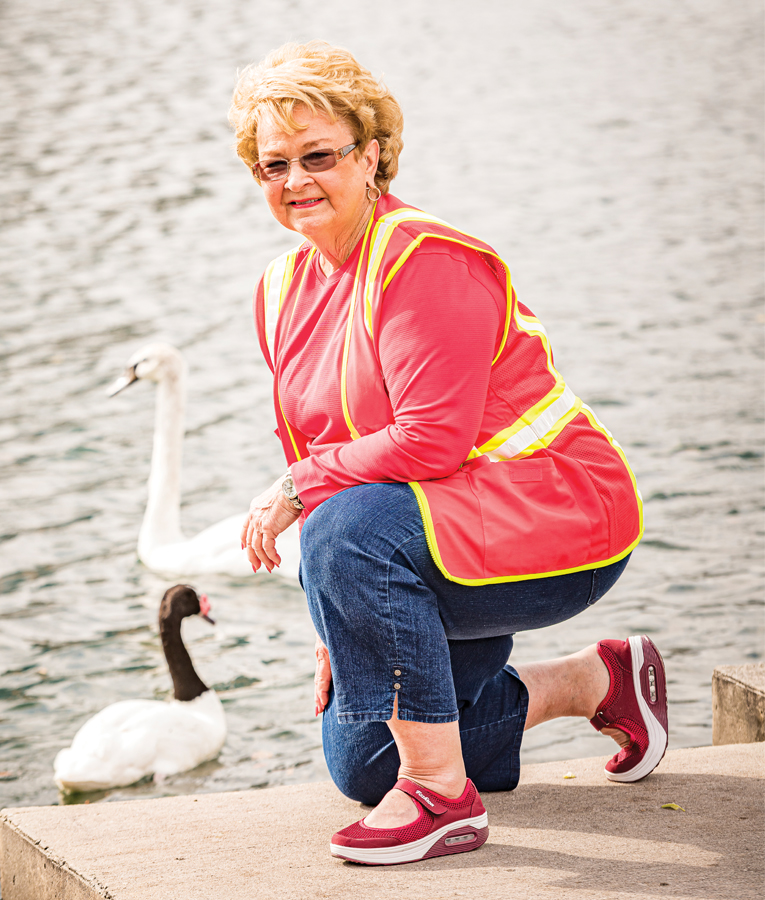 Call of the wild. In 2005, Pekins saw in the newspaper that the City was looking to hire volunteer tour guides for Lake Eola. The position seemed like a perfect fit for the retired Orange County schoolteacher and animal lover. “I was eager to find out more about the swans and teach other people.” However, to her and the other volunteers’ surprise, the guides were supposed to focus on the lake’s statues, resulting in everyone to back out, except Pekins. As a result, the tour aspect was scrapped, and instead Pekins became one of the first official swan volunteers. Now she’s at Lake Eola four to five times a week caring for the swans, leading a team of volunteers and educating visitors on her feathered friends.

Swans a swimming. Fifty swans call Lake Eola home, but avid birdwatchers will note that there are five different species: Black-necked, Whooper, Polish Mute, English Mute and Trumpeter. While Pekins doesn’t like to pick favorites, there are two Whooper swans to which she is particularly close. “They’re a mated pair and when they see me, they’ll always make a noise.” The waterfowl are inseparable and do everything together, including sitting next to each other during their health checks. “They have to be together, or they’ll go nuts,” Pekins adds, proving just how seriously swans take the aspect of mating for life.

Mother nests best. “Sometimes a mother makes three or four nests before deciding on which one she wants. Then when she begins to lay, she plucks out the feathers on her stomach so her skin is touching the eggs.” This helps to keep the clutch warm. Once her cygnets (baby swans) are born, the mother coats them with oil from a preen gland on her tail to waterproof the cygnets’ downy fluff.

Lettuce eat. While it may be tempting to share with the swans whatever you’re munching on, it’s important to only feed them from the food in designated feeders or stick to lettuce. “They’re herbivores. They love lettuce, especially romaine. Bread is bad for them and for the lake.”

Don’t be fowl. “The most important thing to us is the safety of the swans,” says Pekins, so she’s always on the lookout for any birds that may need medical attention because of sickness or injury. Each November, the swans receive a health checkup where they’re weighed, receive any necessary shots, and get a few of their 26,000 feathers clipped. “We’re real big on the health of our birds,” she says, adding that there’s no reason to worry about the swans during bad weather or a hurricane. “They know what to do. They get in the bushes and underneath the bridge.”

Ruffled feathers. While it’s typical for swans to be territorial over their nests, Pekins says that some of the Lake Eola swans are wary of policemen. “Once, an officer came in a big black SUV. He got out of the car and a swan chased him around several times before he could get back in,” she laughs. On another occasion, after a swan had been taken from the park, one brave officer recovered the bird and returned it to the lake after a ride in the back of his police car.

This article appears in the July 2020 issue of Orlando Magazine.
Categories: People
Tags: Patty, Perkins, story-of, swan, volunteer
Want to read the whole issue? Download and read this issue and others on Magzter.