Story of an… Eye Mechanic

Years of puttering with his grandpa’s tools gave R.T. Hoffman the know-how to keep the Orlando Eye spinning.

His answer to childhood boredom. A lifelong Floridian, Hoffman and his grandparents lived near Ocala National Forest. “We lived out in the woods for 14 or 15 years of my life. There wasn’t a lot to keep me busy but my grandpa’s toolshed. I have been fluent in the use of power tools since I was 12.” Hoffman later used his skills to help his grandparents flip houses.

Don’t let him near your jigsaw puzzle. “I love to take stuff apart. I always took LEGOs apart. I took the remote apart. My grandparents would go to the store or whatever, and they’d leave me there, and the TV would be on the floor in a bunch of pieces.” 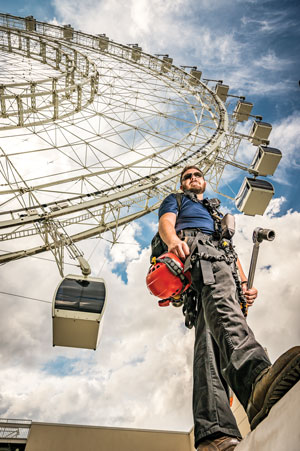 If you rebuild it, it will run. “My crowning achievement was at age 15. I swapped out an engine by myself. It was an Isuzu Rodeo. My grandma drove it till it blew up. My grandpa was like, ‘If you fix it, you can drive it.’ I got the manual. I read my way through it and fixed [the car].”

He started as a ride operator. Hoffman was working at Old Town in Kissimmee when he took note of the techs who would come by to fix stuff. “I thought, ‘That looks a little more fun than this.’ ” When the lead engineer was out with an injury, Hoffman told the general manager, “You know, I’m really good with mechanical things.”

Moving up—like, really. When the lead engineer returned to work, he took Hoffman under his wing. “That same boss who taught me about rides is actually my current boss here at the Eye, George Rohrig.” Hoffman, a team supervisor, began working at the Coca-Cola Orlando Eye as an engineering technician shortly before the attraction’s opening in the spring of 2015.

Flashbacks of that Isuzu. Physics, circuitry, software and, yes, car mechanics all come into play in servicing and maintaining the 400-foot-tall, 30-capsule attraction. “You really do have to understand a little bit of everything. There’s actually a clutch system to keep the leveling motor from locking up completely. It’s the same thing in your car. That same clutch system is on the capsule to prevent it from ever flying upside down.”

Moving up the ladder. Every day Hoffman and his team climb the 248-foot ladder to inspect the ride. He also gets to go up in a single-person spider basket. “To get into the structure, sometimes you have to swing it so you can actually grab onto something. I send my wife videos. She hates me for it,” he laughs.

I made that. In his free time, Hoffman enjoys—surprise—making and fixing things. His proudest achievement? “I don’t want to sound all mushy, but it was holding my kid for the first time. He’s my absolute world.” As for the Eye: “That’s my second kid. It’s a big kid. It’s an absolute brat, though.”