Story of a… Scenic Artist

Whether he’s transforming a movie set or a theme park ride, Charles Richardson uses paint and power tools to create scenes and props that bring make-believe to life. 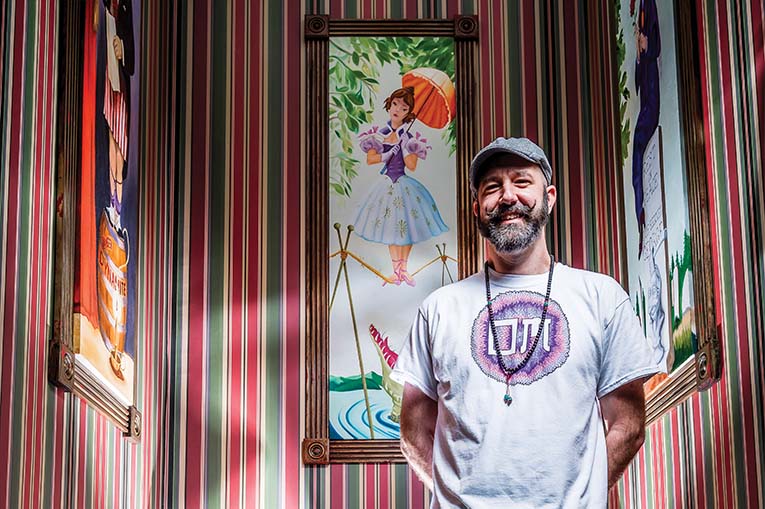 He’s a bit of a magician. Richardson utilizes everything from cornstarch to dehydrated alcohol to texturize, age and characterize props, building facades and film sets. He can create the illusion of a plastered brick wall over a smooth surface and make a new building surface appear old and water-damaged. He adds layer upon layer of materials and product to give an aged effect. “It’s like being a magician because most people don’t see how the illusion is created, so when they see the final product, it looks like magic.”

From childhood to livelihood. When he was in the third grade, Richardson lost a drawing contest. That experience made him want to prove he was an artist. He picked up charcoal drawing as a teen and later discovered oil painting and graphic design. “It’s almost cliche in the sense that art saved my life. I had a rough childhood. I used my art as an escape. Art has always been there for me to vent and find a way out.”

Getting into the biz. Richardson was working in a print shop full-time and apprenticing for the late local muralist Jim Jackson when he started his freelance business, One Mind Art, Inc., in 2004. That same year, he secured his first television production gig as a scenic artist on the Golf Channel’s “The Big Break,” where he learned the basics of his craft. From there, he worked on other shows such as “Deal or No Deal” and “The Right Stuff,” as well as several films.

Making dreams come true. He has also done scenic work for private clients. He transformed the office of a Disney fan into a space reminiscent of the theme park’s Haunted Mansion. Richardson’s work allows him to immerse himself in a fantasy world. “It’s fun to pretend at work and get paid to do that.”

There’s no place like home. His career has taken him to the Bahamas, Canada, Mexico and the Dominican Republic. Still, some of his most memorable jobs have happened right here. For Universal Orlando Resort’s Wizarding World of Harry Potter, Richardson and a team of scenic artists used foam and fiberglass to sculpt the pumpkins that line Hagrid’s Magical Creatures Motorbike Adventure queue, a project that took a year to complete. They also spent about six months working on the Hogwarts Express, making the new train that had been shipped from Sweden appear as though wizards had been using it for decades. “Everything down to the windowsills and the little metal trim had to look scratched and old.”

It is all about creative expression. Being a scenic artist requires a different skill set than the other creative endeavors Richardson enjoys. “When I’m drawing a logo or illustrating an image, I have to stick to certain parameters that are very controlling. But when I ‘scenic’ something, I have to let go of control. It feels like when I was a child and could do what I wanted.” Currently, Richardson is illustrating a children’s book and teaching himself computer animation. “I’m looking forward to creating stories that make a difference in people’s lives.”

This article appears in the January 2021 issue of Orlando Magazine.
Categories: People
Tags: Charles Richardson, scenic artist, story-of
Want to read the whole issue? Download and read this issue and others on Magzter.