Story Of A… Orlando Native

Sally Downs, 85, takes us back to a simpler time.

She was born in Kissimmee. “We moved to Orlando when I was six weeks old. We’ve always lived in this neighborhood (Delaney Park). I went to Delaney Street Elementary and Cherokee Junior High and graduated from Orlando Senior High in 1948 right after the war.”

Most of the roads weren’t paved. “All of this was wooded. Delaney and Kaley were paved; everything else was dirt. The street ended into Lake Lancaster. We had a big chicken yard and a cow. My daddy had a big vegetable garden. My brother, Joe, fed and milked the cow. On the way to school, he took the cow down to the lake, staked her in the ground, and she could graze and drink from the lake all day long.” 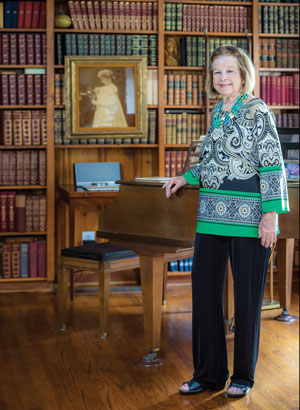 Crowned Little Miss Orlando at age 4. “They were picking Miss Orlando for the Miss Florida contest. Back in those days, Miss America was a big deal. So they had a children’s contest along with it. My mother, who was a wonderful seamstress and musician, made me a Shirley Temple dress with ruffles and little puffed sleeves, and my hair was in long corkscrew curls and a bow that must have been 10 feet tall. I can remember standing on the stage in a pool of light and looking out at the dark and being able to see all the faces.”

Times were hard, but sweet. “We’d run around and gather teams and play a lot of hide and seek—‘Olly Olly Oxen Free!’ During the war, gasoline was rationed. Sugar was rationed. Lard was rationed. There was this place called the Oasis in downtown on Central, where everybody hung out after school. We had Glenn Miller music and, of course, Frank Sinatra.”

She was a young culture vulture. “At the age of 8 or 9 I heard the Indianapolis Symphony at the Muni Auditorium (the Orlando Municipal Auditorium later became the Bob Carr Performing Arts Centre). I remember ballets and, at that time, my mother made new long dresses for us to go to all these concerts, which were fabulous!”

On the town in Orlando. “Back then, downtown was the San Juan Hotel and the Angebilt Hotel, where we dined and had functions. We went to Goodbread’s Drive-In on Lake Ivanhoe, where you would park and the waitress would come out and take your order, bring a tray and put it on your door, and you would sit there and eat, and the boys would come see you. That was the place.”

A dream deferred. “I wanted to be a lawyer. There was a song called ‘Dance, Ballerina, Dance.’ It goes, ‘so on with your career, you can’t afford a backward glance…’ It’s about this girl whose boyfriend wanted her to marry him, but she, in those days, couldn’t have a career and be married. So that song kind of weighed on me, and then reality hit. I didn’t do it.” But one of her daughters took up the mantle: Mayanne Downs is Orlando’s city attorney.