Story of a… Champion Wakeboarder

Shaun Murray goes from being a kid on the lake to a Hall of Famer, video game star and “American Ninja Warrior” contestant. 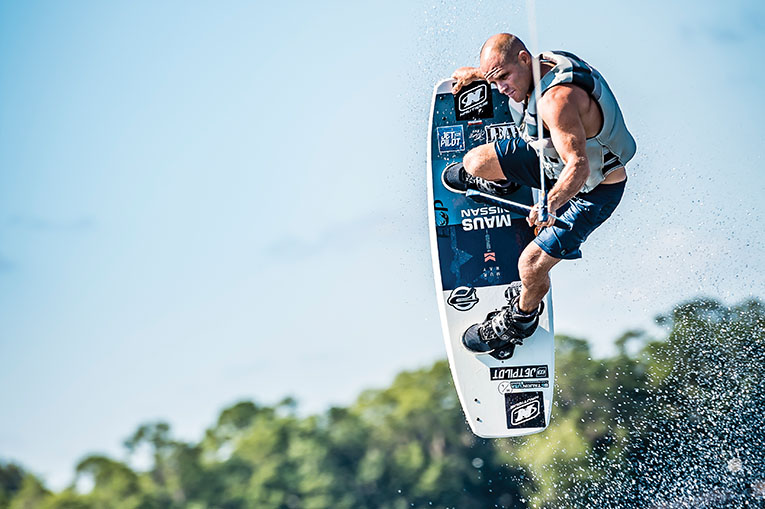 Riding the wave. “I’ve always loved being in, near and on top of water.” The day Murray graduated high school, he left home to compete on Florida Southern College’s waterski team. Within a year and a half, he dropped out when he began landing sponsorships. “I haven’t gone back to school yet, and this is 25 years later.”

Good as gold. Murray is the only rider to hold world, pro tour and national titles simultaneously. “The only gold I never got was the X Games. I got silver twice.” But he can’t tell you how many competitions he’s won. “All my trophies are in the attic,” he laughs.

He signed a what? “These guys brought this prosthetic leg over and said, ‘Hey, can you sign this for our buddy?’ I’m like, ‘This is his leg!’ I asked, ‘How is he walking around right now?’ and they said, ‘This is his wakeboarding leg.’ So I signed the guy’s leg.”

This moment (not) brought to you by COVID-19. The pandemic delayed Murray’s induction into the USA Water Ski & Wake Sports Foundation Hall of Fame. “I grew up knowing a lot of the names that are in the Hall of Fame. I just always considered myself another kid on the lake.”

Sorry, Mom and Dad. Murray has suffered multiple serious injuries on the water since childhood. “Now that my kids”—daughters ages 12, 10 and 5—“have gone to the hospital more than once, I find myself thinking that I must have been an absolute terror to my parents. Many times I’ve apologized for my multiple ER visits.”

A priceless moment. “My dad has never been one for extravagant things. I was at the 2000 wrap-up of the Vans Triple Crown. I won the entire series, and that meant I won a Ford Ranger. I got the keys and said, ‘I want to give this truck to my dad.’ He still drives the truck to this day, and it’s 20 years old.”

His game face. In 2003, Murray became the featured character in the video game “Wakeboarding Unleashed featuring Shaun Murray.” He says, “I grew up playing video games, so to be featured in a game, let alone on the box cover, was absolutely surreal. There were so many other people who could have been featured on there, but somehow I got picked.”

From marketing major to professional marketer. Murray spends his time coaching at Orlando Watersports Complex while doing marketing for his multiple sponsors including board, boat and gear manufacturers, all of whom require he remain active on social media. “I’ve got a YouTube channel.
I like creating fun, instructional, challenging, goofy content.”

This article appears in the August 2020 issue of Orlando Magazine.
Categories: People
Tags: American Ninja Warrior, Shaun Murray, wakeboard
Want to read the whole issue? Download and read this issue and others on Magzter.