The new Italian-inspired spot from the creators of Se7en Bites is a magnificent revelation along Lake Ivanhoe.

Trina Gregory-Propst and Va Propst opened their iconic bakery and breakfast spot Se7en Bites in 2013. It has made Trina a local food hero, and the restaurant was featured on several Food Network shows, the pair competing twice on Guy Fieri’s Grocery Games.

But the overflow-popular Se7en was, the couple readily admit, Trina’s sweet dream. With Sette, an “Italian-inspired” restaurant in a corner space with an enviable overlook of Lake Ivanhoe, Va gets her wish, and a superb one it is.

Va Propst has sometimes been left out of the public image of Se7en Bites, which is fueled by her more outgoing wife. But, as she says, “It not like I wasn’t the gravy slinger. I built the savory over there.” The idea of Sette has always been, to put it in culinary terms, on the back burner. “As soon as we bought and opened the other space,” Va says, referring to Se7en’s larger relocation on Primrose Drive in 2016, “I said, ‘I need my Italian restaurant.’ ” 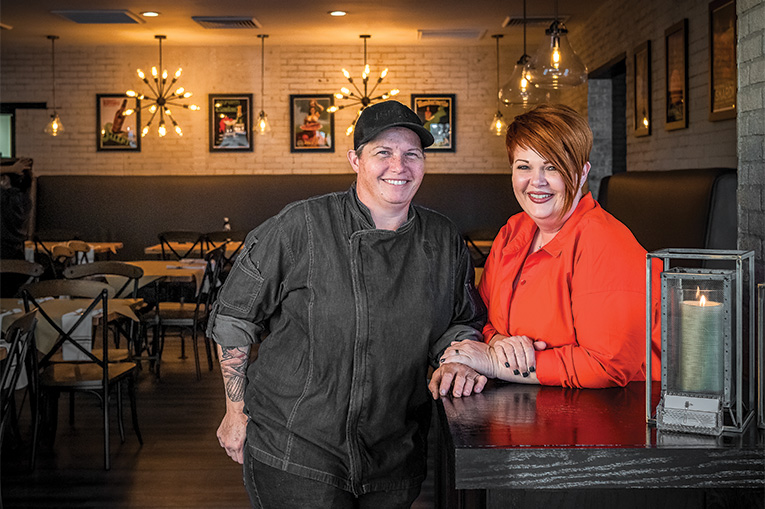 In Sette, Va Propst and Trina Gregory-Propst have a winner. (Roberto Gonzalez)

Trina says, “This is something we’ve discussed since July of 2013, when we got married, three months before Se7en Bites opened. We had a spectacular meal in a little restaurant in Brooklyn and after that she said, ‘This is what I want to do.’ We’ve been testing this menu for four years.”

That testing has yielded deceptively simple-sounding bites such as the meatball antipasto ($11)—roasted eggplant or pork and beef spheres in rich tomato gravy on a bed of polenta, a small swirl of whipped ricotta atop. It is a meal unto itself. “My son,” Trina says, “has grown up with those meatballs since he was five and would [otherwise] only eat chicken nuggets and hot dogs.”

Every dish is made in-house including the pastas, extruded and sheet, up to 100 pounds a day, created on the kitchen’s powerful machines that might be Va’s favorite toys.

“We wanted to take the things you would find in a countryside home at someone’s grandmother’s who, when you come in and you may have just eaten in town, she’ll say ‘you look hungry,’ ’’ Trina says. “We wanted to find a way to translate what we do into a rustic Italian concept.”

Sette resides on the piece of land the duo had eyed as the original home of Se7en Bites. In the past five years, the property has been, in rapid succession, Elliot’s Public House, Nova and Stir, following decades as the mutable and somehow always dive-y Brian’s Diner, which attempted renewal repeatedly from when it opened in 1977 (a section of the plot was Nora’s Lake Ivanhoe Wine & Cigars for several years).

With Sette, there’s a new casual sophistication in the brick walls and industrial seating, the pewter-looking flatware, meatballs served in tiny iron skillets, and the covered patio with views of the lake, an ideal spot for one of the restaurant’s crafted cocktails.

Trina looks over at her partner in all things with a tear in her eye. “I’ve never seen her so happy,” she says, “doing what she loves.”

The usually reserved Va breaks into a grin. “I get to make pasta.”

Va’s pasta rollers turn out a rich lasagna ($23) made with one continuous noodle pleated around hearty beef Bolognese sauce, béchamel and three cheeses. “You know when you make lasagna,” she says, “you always want the crunchy corner? Ours are individually made, with crunchy corners all the way around. You get the best piece every time.”