Or filet mignon, or ricotta gnocchi, or Bananas Foster. Diners love to dish on their dishes via photos on social media. And so do the chefs.

Joseph Hayes,
Picture this: date night at a cozy restaurant. The lights are low, the service attentive but understated, and the meal, when it arrives, is beautifully prepared and exquisitely presented. It’s the perfect time to take a dozen or so flash pictures with your phone.

If you think that’s a great idea, you’re not alone. Taking digital photos of food has become so normal that many people do it every time they dine out.  Posting photos of food on Instagram is the new menu-stealing.

We have become picture-taking maniacs. According to AdAge magazine, 10 percent of all photos ever taken have been shot in the past 12 months. And a LOT of the hundreds of millions of pictures uploaded daily via Facebook, Instagram and Twitter are of restaurant meals—everything from hot dogs to haute cuisine. Add to that the food photo aggregator sites Foodgawker and Tastespotting, as well as social dining guide Burpple (“Snap and post your delicious food moments in 30 seconds!’’) and the question becomes: Is there any entrée out there that hasn’t had its closeup? 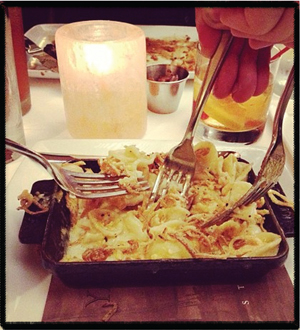 “I’m an enthusiastic photo taker,” says Orlando actress Lulu Picart, who posts on several Facebook, Tumblr and Twitter accounts and texts images directly to friends. “For me, memories are about meals. I plan a lot of excursions with friends from all around the world—I keep a list of dishes I want to try, and when I finally try one, I take a picture. “ For Picart, digital snaps are just the modern version of photo albums. “I take them for myself,” she says. “That meal is the linchpin of my day.”

And while you’re sending pictures and comments about your bison burger or ricotta gnocchi out to the world, it may surprise you to know that the chef who made the dish could be watching. There are now three essential tools at a chef’s station: a good knife, a pair of tongs, and a smartphone set to Twitter.

“I watch it all the time,” says Kathleen Blake, chef/owner of The Rusty Spoon in downtown Orlando. “The phone is always on, beeping away. I like to know what people are saying, if they like what I’m sending out, or if they don’t and there’s something I can do to fix it.”

K Restaurant’s Kevin Fonzo not only watches the feeds, he participates. “My phone is right here, next to my whisk,” says the College Park chef. “If I have two seconds between plating a dish and sautéing something, I’ll stop my server—wait, let me take a picture!—and Facebook what’s going out to the table.”

He sees the reactions once it gets there. Think about that. Your snarky comment about serving size or the temperature of your lobster bisque is being read by the person who made it, and Chef knows who ordered it. And sometimes Chef isn’t happy. “I saw a nasty tweet once,” Blake says. “They said, ‘How dare this place serve such small oysters.’ I looked at the picture, and they were littleneck clams.” She laughs, “I wanted to respond immediately, and everyone in the kitchen yelled, ‘Don’t do it!’”

Photos often go beyond the meal. Time was, a casual note back to the kitchen or a mention to the server was proper recognition of a great meal. Now, the Internet is chock full of images, taken at arm’s length, of grinning guests standing next to area chefs. Scott Hunnel, the master of the kitchen at Disney’s high-end Victoria & Albert’s, is often stopped during his stroll through the dining room.

“I am happy if my guests like the food so much they want to take photos,” Hunnel says. “And when I go to talk to the guests, they want photos with me as well.”

Some big shot chefs aren’t as accommodating as Hunnel.  Enthusiastic foodies, trotting out tripods and full-sized digital cameras, have created a backlash. According to New York magazine, David Chang, founder of the famed Momofuku restaurant group, has banned picture-taking at his 12-seat Momofuku Ko location in New York city. The $195-a-seat Blanca in Brooklyn states quite clearly “no cell phones or cameras in the dining room” on their menu.

The “to snap or not to snap” question has generated heated online debate. Whether the picture-taking is actually annoying other diners or just social media hype, some people hearken back to the days of public smoking and suggest photo and non-photo sections in restaurants to deal with the snapshot addiction.

This article appears in the January 2014 issue of Orlando Magazine.
Categories: Food & Drink