In a year, Orlando’s Juice Bike Share has expanded to 29 stations with a system that caters to commuters or those just seeking a leisurely ride.

When Nate Ritter and his family moved to downtown Orlando, they sold one of their two cars, choosing to make shorter trips using a new option: bike sharing on a bright orange three-speed.

The trademark bicycles are available for rent at 29 stations throughout—and even beyond—the downtown area through Orlando’s Juice Bike Share program, named in honor of the area’s citrus industry.

“For our day-to-day activities, we typically don’t have to go too far, so we are able to use Juice Bikes for most trips,” says Ritter, who also works downtown. A founding member of the Juice Bike program, Ritter uses bikes for both weekday commuting and weekend recreation. 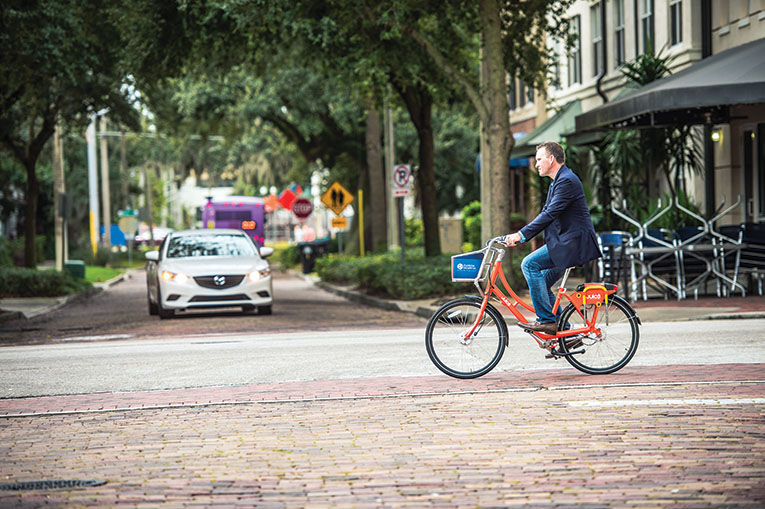 Nate Ritter uses the bright orange bikes for both commuting and recreation.

“Before Juice Bikes started, we would typically use our own bikes, but that was much more of a hassle. The convenience of walking a quarter of a block from our building to get a bike is awesome,” he says.

More than 200 bikes are available at locations within Orlando city limits, says Juice Bikes founder and program director Peter Martinez. New racks have been recently added in Baldwin Park, and more are in the works as the program’s perimeter continues to expand.

Riders can set up hourly, monthly or annual plans online or via an app. Using a keypad code that unlocks a U-bar on the bike, riders can travel as far as needed—whether a few blocks or a daylong ride—and then return the bike to another Juice Bikes station or drop it off at a regular bike rack for an additional fee. The program has racked up more than 20,000 miles since its soft opening last January.

Downtown resident Brent Poore got on board in late July. “I started with an hourly plan, then realized how much I would use Juice Bikes. So I upgraded to an annual plan,” he says.

That turned out to be a good call for Poore, who has used at least half of the program’s stations. “I use Juice Bikes for all sorts of stuff, from getting groceries at Publix to riding back from concerts at The Social.”

He believes the Juice Bikes program will grow as Orlando does, prompting more people to move closer to the city center as he and his family have done. “My office is only five minutes away from my apartment downtown, but my five-minute bike ride is still better than a 10-minute drive, and I’m being active. Active transportation is the way to go.”

With parking challenges and the cost of owning and operating a vehicle—estimated by the American Automobile Association in 2015 to run $8,698 a year on average for a sedan—Martinez sees bikes as a go-to option for those who live and work in the city.

“I live downtown. I work downtown. I do everything here. I get my groceries on my Juice Bike. The baskets we have can hold a lot of groceries—the equivalent of four reusable bags from Publix. I do about two or three days worth of groceries on the bike every week,” Martinez says.

The bikes also feature real-time GPS tracking that could eventually result in safer roads. Through the GPS units, the program provides the city with anonymous data of popular routes used by Juice Bikes riders as “a tool to make frequently used biking routes even more bike-friendly,” Martinez says.

Meanwhile, Juice Bikes are not just another transportation option for Orlando commuters. They’re also becoming a source of memories. One of Poore’s favorite Juice Bikes experiences was with his younger sister: “We rode 5 or 6 miles around downtown near the Mills 50 area and back. It was a wonderful bonding time.”

How You Can Get on Board

It takes just four minutes to get on the road with a Juice Bike, says founder Peter Martinez. Here’s how you can get riding:

You can rent bikes at 29 locations around Orlando. View a complete map at orlando.socialbicycles.com/#map. Current locations are: 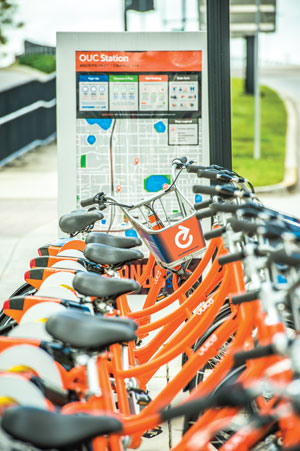